How accurate is the von Bulow edition of the Beethoven piano sonatas?

I'm wondering whether or not the Hans von Bulow edition is scholarly and accurate or not.I'm aware that Liszt favored it as his students recollect that he only used that edition when teaching the sonatas and obviously an urtext is probably the closest thing to the composers original intent. In spite of these observations, could the von Bulow edition be viewed as acceptable and accurate?

If not please provide one or two examples in which the edition is not accurate.

In my opinion Hans von Bülow's edition is still extremely valuable for the numerous comments he offers on interpretation below the music. This was a very influential edition. However, the text is unreliable.

Evidence of unreliability can be found almost immediately if you try. For example, compare the first page of Opus 101 in von Bülow's edition, available on IMSLP, and in a modern edition. For the latter I'll substitute the old but 'clean' Breitkopf und Härtel edition, because this is also available on IMSLP:

von Bülow's suggestions are not sufficiently distinguished from what was originally present: a large number of extra hairpins, e.g. in measures 3-4, echoing 1-2; in 9-10 in the upper parts, and so on.

There is some hint of the practice of printing suggestions smaller than original markings, but it is too difficult to tell, too often.

Note that both editions amend a tempo present in the autograph to Tempo I. The Arrau edition published by Peters corrects this, and I assume other more modern editions do too. This is very insignificant.

It's also worth noting that these editions typically have an introduction where the editors explain their practice, including how to differentiate any additions from the original. This could be present in von Bülow's edition, and may account for things like pedal markings. However, it can't account for the hairpins.

Here is an especially bad mistake in the Appassionata that occurs in several other editions too: 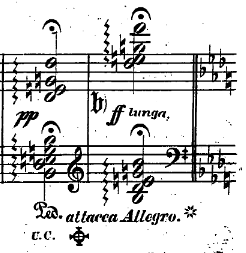 But look at the manuscript: 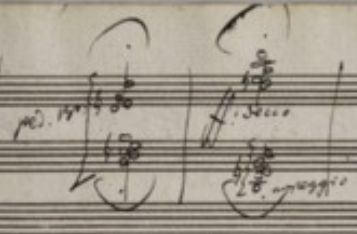 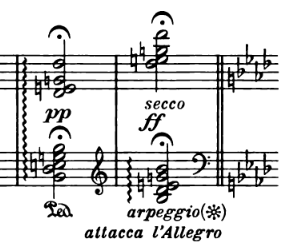 The right hand chord is secco. This is a completely different effect.

Another famous mistake, this time from the first movement of the Waldstein: 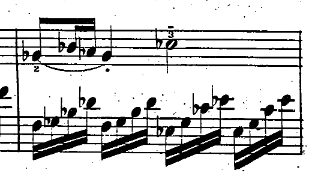 That should be F flat: 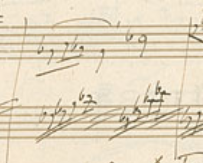 A catalogue of von Bülow's inaccuracies would be quite a booklet, but again I believe the edition is valuable despite these flaws.

I agree with the above answer 100%. I'm currently working on the last three sonatas and using both the Von Bülow and the downloaded free score. I prefer not to have Von Bülow's suggested dynamics and peddling because it's difficult to distinguish with what are Beethoven's actual markings.

I frankly wonder if anyone has understood especially the last five sonatas as well as Von Bülow. For instance, he writes at the beginning of Sonata 32 "This last pianoforte sonata of the Master is held by some, and not without reason, to be the most perfect among those of the "third". . . . Herr von Lentz. . . aptly summarizes his characterization of the two movements in the headings "Resistance/Resignation," or, still better, "Samsara — Nirvana." This is the utter, absolute, eternal truth – all of Beethoven's last works have given the most profound direction to my life.

Von Bülow would often play the last three or five Beethoven sonatas in a concert. He was also known for his double performances of Beethoven's ninth. On one occasion when only a single rendition was planned and the audience was insufficiently appreciative, he immediately repeated the entire 75 minute work. A reviewer at the time noted: "he baptizes the infidels with a fire hose." I read his entire biography not long ago. One quip: "the well tempered Clavier is the Old Testament. The Beethoven sonatas are the New Testament. We must believe in both."

Not the answer you're looking for? Browse other questions tagged piano classical-music beethoven editions or ask your own question.

9
Sibelius op .75 Number 5: is the composer a bit sloppy, is my edition a bit sloppy, or am I missing something
5
How to distinguish between piano music by Beethoven and Chopin?
7
How accurate are the pedal indications of Bach - Busoni, solo piano works?
0
Beethoven piano concerto 3 mvt 3
0
Stuck orchestrating the melody of a Beethoven sonata
4
Anotations in Beethoven original score of the 9th symphony
2
Sonatas for piano and violin?
2
How to execute rapid broken chords in Beethoven Op. 90
14
Did Beethoven "invent" ragtime with Piano Sonata No 32 Op 111?
15
Beethoven Piano Concerto No. 3: Last notes played by piano or not?