Can this note be analyzed as a non-chord tone?

I know that post-tonal and popular music can't always be analyzed through the same methods as the Common Practice Period, but I still like to see how people would try analyzing things.

This is a chord progression from a song that came out last year that I love ("Fragile" by Yes).

In the second chord (C/D), would that simply be analyzed as IV/pedV? I don't know if the D is a pedal tone since in the next chord it moves down to the G, and it's not really a suspension since it doesn't resolve to anything there.

Is this simply too different from tonal practice methods to be analyzed the same way classical pieces from the past would have been?

If the bass is held and considered the non-chord tone, I think the only traditional non-chord tone labels available are suspension or retardation, but those technically require resolution which doesn't happen in the example.

Dropping some voices to simplify and shifting some metrical placement we can get the following which is a basic escape tone. 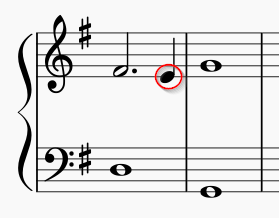 Shift those notes metrically to get back to your example... 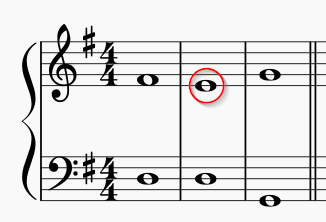 ...add the additional voices and you might consider this some kind of accented, triple escape tone group... 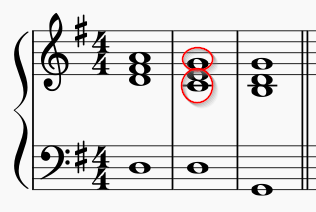 Personally, I think my explanation above is trying to shoe-horn the music into a traditional non-chord tone identity, but I thought it might be valuable to try identifying an appropriate non-chord tone.

(One might grope further and find a combination anticipation in the G and passing tones in the C E.)

While an escape tone might - kinda, sorta - fit on paper, I don't think this provides a satisfactory explanation.

Why isn't it satisfactory? Because we first need a notion of what is dissonant and that is a matter of style!

Slight digression: in basic blues we use primary triads I, IV, V but all harmonized as dominant-seventh chords where there is absolutely no need to resolve the sevenths. In other words you can say the sevenths in those chords are not considered dissonances. I think you can also say the tritone isn't dissonant in blues harmony, certainly not in the common-practice era sense.

Perhaps we can approach this music example in a similar way.

I think in some pop music styles there is a kind of primary chord superimposed harmony where just about any pattern outlining the primary chords of a key can be combined with another such pattern without the two patterns necessarily aligning vertically. Any such combination is deemed consonant. It's sort of like pandiatonicism except it focuses on the primary chords. I don't know any musical term to describe it.

In the example we clearly have V IV I in the treble part over dominant and tonic tones in the bass. Both patterns separately are simple, direct outlines of the primary harmonies of G major. The fact that the middle bar has a "mis-aligned" C chord over a D in the bass doesn't represent a dissonance. Any combination of the primary harmonies will be considered consonant.

I suppose if we are trying to escape from using Roman numeral analysis or jazz symbols on this (and I think we should) instead of writing V I or D C/D G or something like that, it would just be G major and then the analysis focus might shift to rhythm or changes to the overall tonal center.

This isn't my own original idea. I first read it somewhere as an explanation of harmony in African Highlife music. It makes sense to me as a description of that musical style and I think it can also apply to rock and other pop music.

I would personally view this second measure as its own chord that embellishes the previous measure. In popular music, it's very common to have a IV chord over scale-degree 5 in the bass. Some call this a "rock dominant," and it's basically just a particular voicing of a V11 chord. (See also Is there a specific name for the use of IV chord over the V in the bass, e.g. F/G in the key of C)

Looking at this chord in context, it just adds some extra dissonance above the already tension-filled dominant chord to help lead to the succeeding tonic even more strongly.

It's a very common chord progression. The C/D works as a milder or more ambivalent substitute for D7. You could think of it as having a sus4. Other chords that work similarly are D11, Dsus4, D7sus4.

When you have a "can this be analyzed as an X chord" question, why not treat it like a hypothesis and then try to prove or disprove it? If you think the C/D chord could be seen as serving a V chord function, take existing songs that have a V chord (just about any song will do, because almost all songs have a V chord somewhere), and replace the V chords with IV/V chords. How does it change things? When does it work and when does it not work?

Can this note be analyzed as a non-chord tone?

you can interprete it as you want: as suspended tone, as non chord tone or as IV/V, as Richard says: a V7911.

Mind that all the systems of analysis are only abstractions and also "inventions" of musicians or even non-musicians, so no one can say: this is the only correct analysis. You could only say referring to the theory of Riemann or RNA or pop music this chord could be analysed as ...

In the second chord (C/D), would that simply be analyzed as IV/pedV? I don't know if the D is a pedal tone since in the next chord it moves down to the G, and it's not really a suspension since it doesn't resolve to anything there.

Is this simply too different from tonal practice methods to be analyzed the same way classical pieces from the past would have been?

There have been many errors in music theory and methods of analysing:

it's nonsense to analyse

Not the answer you're looking for? Browse other questions tagged theory chords chord-theory analysis nonchord-tones or ask your own question.

6
Is there a specific name for the use of IV chord over the V in the bass, e.g. F/G in the key of C

6
How to interpret non-diatonic note?
2
Analyzing Hisaishi Joe's “Path of the wind” 2
1
How can one analyze this chord progression from “Vienna” by Billy Joel?
3
Are these upper voices in this final passage from Handel a bona fide F7 chord or some kind of non-chord tones?
5
How would this chord from “I'll See You In My Dreams” best be analyzed?
1
How would these chords from “Christmas Time Is Here” be analyzed?
5
How should I analyze this passage? As vii°7, V7, or both?
10
Can a chord be consonant, but unstable?
2
How can this chord from Rhapsody on a Theme of Paganini be analyzed?
4
What is it called when the melody note is held, but the chord changes to resolve to the final harmony?