Can a song in one key contain major chords that are not in the key? Or does that change the key?

As an intro to piano, I want to learn basic chords from 2 White Stripes songs. They are as basic as piano gets, yet very catchy and powerful. They are very major sounding. I have never been able to satisfactorily understand the (putatively basic) notion of “key”. Additionally, I have forgotten whatever I did learn many years ago.

However, I remember learning to harmonize the major scale with major vs. minor so all the notes of every chord fits into the major scale. E.g.: I ii iii IV V vi vii(dim)

The second song has D C G (D) and F G D ... F G A for the second part. Is this in the key of D just because D is the first chord? If so, it would be I VII IV and III IV I ... III IV V respectively. Same questions above apply to this as well.

You confusion is coming from mixing "common practice" harmony theory with pop music.

Both of the songs you linked are in the key of D. We know this because the D chord and melody notes clearly have tonic function, meaning they are used as a harmonic "home base", and the other chords played are designed to create a tension that resolves to D.

If this was a Baroque-era chorale, we would put ourselves in D major and play our ii - V - I -IV - I - vii - I chords using the notes in the scale and it would sound like classical music. All of the harmony "rules" you cite would apply. But, this is not classical music! I'd even hesitate to call the scale major or minor--I think "D blues" is much more accurate.

So, even though the key is D (any tonal music has a key), Jack White is not constrained by the rules of common practice harmony, so he's playing a bunch of major chords and putting them in an order that sounds good. It sounds good to him because others have done this before him, and the lineage of his style of music can be traced back through the blues until it reaches a relative of western classical music in old-timey American gospel church music.

Now, it is possible to analyze this stuff with classical theory and roman numerals, and if you ever take a class called "Analysis of Rock Music", this is what you'd be doing. The first song's A section would probably look like this: D: I - bIII - bVII - IV. The word we use to refer to this mixing-in of notes from outside of our key is mode mixture.

The extra major chords that are not part of the scale are called chromatically-altered chords. Particularly, these are chromatic mediants (probably the most common kind of chromatically-altered chord). The mediants of the scale are a third up or down from the tonic, so it's iii's and vi's that are most prone to this treatment. VII can also be considered a mediant off of the dominant (V).

yea, without reading the other answers i find that many many songs unintentionally change key depending on the part of the song, sticking with jack white, look at the song "old enough" by the raconteurs. the main part of the song is in G major, the chords being...

then in the second part of the song it uses an F chord instead of a D chord, there for the shifts into C major.

Again with some blues music, if im in the key of F, i will use F, Bb and C (all major chords) but then u will find that any solos played by any instruments will use a minor pentatonic scale which then gives of a certain sound.

defining key can be a dodgy subject because songs often move between keys and then there are modes which are a whole other subject.

look at jimi hendrix playing hey joe, the chords are

I was seeking an answer to how can they use a Bb chord in the key of G major on the song "words" by the Bee Gees, and found this blog. The Jimi Hendrix example above is actually used in music theory classes to illustrate walking backwards around the circle of fifths.
Another way chords outside the key can appear is as secondary dominants, which is playing the dominant chord of the target chord before playing the target chord. I.e. if i'm in C and going to Am, I would play an E7 on the way to the Am as it is the dominant chord in Am.
But I think the Bb that appears in G is because they are taking the song into G minor at some point and Bb is in that key. So basically they are modulating back and forth between the major and minor available chords for the song.

I think what's happening is the theory of using parallel key chords. It's become commonplace, and explains the 'odd' chords. In, say D, it gives the usual D, Em, F#m G, A , Bm and C#o, but in Dm, also gives Dm, Eo, F, Gm, Am, Bb and C. Many pop type songs will use chords from both these lists, but the key of the song will usually be the original note name major.

When a chromatic chord causes a change of key, it ceases to be chromatic but becomes diatonic in the new key. Chromatic chords exist. Therefore they do not necessarily imply modulation. One swallow does not make a summer. Owning a parrot does not mean you have moved to a tropical jungle. We must not exchange the Common Practice tyranny of keys for a tyrrany of modes and scales. As keeps getting proved by questions here, real-life musicians have never been restricted anyway in a "rule book" way.

'Notes outside the scale do not necessarily affect the tonality'. Walter Piston, Harmony.

A key signature change is notated on the staff like this: 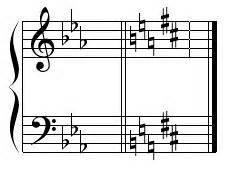 This is very different as then you are completely changing how it is going to feel. A example of where this happens is in the 2nd movement of Eine Kleine Nachtmusic where there are 2 key signature changes, one from C major to C minor and another from C minor back to C major.

I am using classical music as an example but similar things apply to other types of music.

If it was originally in C than these naturals are not needed. If it is going to C than the sharps or flats are not necessary.

For both songs, the key is D minor. These are actually a fairly common minor key rock chord progressions.

It may sound major, but that's because the root and fifth of the chords he's playing are emphasized - basically "power chords" on piano.

Not the answer you're looking for? Browse other questions tagged chords key or ask your own question.

1
Is it okay to play something off the key in a track?
43
What does it mean to write a song in a certain key?
1
Can a song contain pitches outside of its intended key?

8
How do I tell the difference between a borrowed chord and a key change?
6
Chord progression if the chords are not part of the scale?
3
How to name the key of a song that modulates?
2
Why is the submediant chord in a D Dorian mode a Bm7b5?
4
What are weak and strong chords?
5
Minor Key (and other key?) Roman Numeral Analysis
3
Do Roman Numerals for a chord progressions change capitalization when played in a different key than the original?
9
Can the same song be written in a minor key and major key with the progression written differently?
10
How does Eb connect musically to C major chord progression like in this song?