What does a duplicated note in a chord mean?

While reading the score of Misty (Burke, Garner, arranged by Roed), I encountered the following chord notation (it's on the bass clef in bar 32, and the signature is E-flat major): 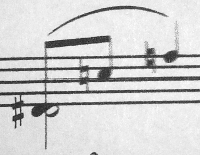 What does the duplicate F-sharp mean?

The double notes indicate that the note serves two purposes in the piece. It's not uncommon as you progress through keyboard literature to find a single hand doing two independent things at the same time, with different rhythms, and that's what's happening here: a slow-moving bass line and an arpeggiated accompaniment. Let's call them parts, though you'll also hear them called voices (as if different people sang the different parts, though they're not in this case!) or lines (particularly if both parts form melodies). Usually the independent parts involve different pitches, and are simply notated on the same staff, with one part as stems down and the other part as stems up. Occasionally the parts may cross or land on the same note, in which case the notator just shrugs and writes the logical but somewhat twisted result.

The correct way to play this particular case is to use the longer rhythmic value (hold down the note a half note's duration with your finger). If the upper part is a melody the note could be shaped accordingly in terms of loudness and rubato, but if it's a simple accompaniment figure in the left hand I don't think that's necessary.

There are other ways you could have been notated this, but they would mean slightly different things.

It means you have two voices here. The lower voice plays a half-note F# and the upper voice plays the arpeggio. Basically you would play it by keeping the F# down and playing the upper voice as usually. If you use pedal, you don't need to keep the key physically down. To get the illusion of two voices in this case, you can accentuate the first note a bit.

The execution is instrument-dependent, the idea is two separate voices. You got the explanation for piano. If you take a cello and, uh, turn down the G string half a note or transpose the music up half a note, then you will indeed be playing the first note on two strings simultaneously.

Wait, are we still talking about a cello here?

2
Harmonic intervals using identical notes
19
How should I play two notes together on lines below the staff?