Can this chord progression be viewed as a cadence? 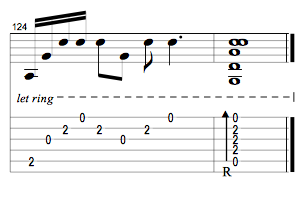 I was wondering if this ending chord progression to Led Zeppelin's "The Rain Song" could be viewed as a cadence.

"The Rain Song" uses a very interesting guitar tuning (D-G-C-G-C-D). The notes also look a little off on the picture. The second-to-last measure is A-G-D-D-D-G-D-D, and the final measure is the Gsus2 chord (G-D-A-D).

If this followed the guidelines from my theory textbook, it would be a plagal cadence since the first chord doesn't contain the leading tone in the key of G, and the second chord is the tonic (although it is a suspended chord).

Do you think this can be considered a cadence? Or is it better viewed as something else like a short chord progression?

You don't have two different chords, you have the same set of notes which is G-A-D. The bass is just descending down from the A to the G. When listening to the song you can even hear the harmony doesn't really change right at the end and has more of a droning effect.

Not the answer you're looking for? Browse other questions tagged theory chord-progressions cadence or ask your own question.

10
Understanding the concept of a "Cadence"
2
Is a v-VI♭ progression in a minor key still a deceptive cadence?
3
How is this chord from Liebestraum No. 3 analyzed?
4
Can the melody determine the key of an ambiguous chord progression
4
How to make a plagal cadence sound convincing as an ending?
6
In a minor key can a cadence on the relative major be considered a type of quasi half cadence?
12
Chord progression where tonic chord does not appear at all
4
Is this phrase ending a half cadence, imperfect authentic cadence, or neither?