Does the bass note in a “slash” chord really have an associated interval?

I have a question about "slash" chords.

Look at the chord E/G:

However, I would have thought by definition chords cannot contain both minor and major thirds, so when looking at just the E major chord, can you really say the G is a ♭3?

The way I think about it, the G doesn't have a relationship to the rest of the notes in the E major chord. In the E/G chord, G is a tone that is played "over" the top of the underlying E major chord.

I wouldn't have thought the G necessarily has to be represented by an interval. I mean, the chord is called E/G not E/♭3.

To that point, my observation is that in all other chord names - the altered notes, or any other special notes - are represented by an interval. E.g. G♯ m(maj7)♯5

Slash chords are the only chord names (that I'm aware of) which extend the chord name with an additional note, not an interval. I was assuming that this was because there is not actually an interval associated with the slash note (in context of the underlying chord).

So... what is the correct way to think about the relationship of the G in E/G ?

Sure, chords can contain major and minor thirds at the same time! We see 'em all the time in jazz. I call it a major-minor chord (which however is quite different from a major-minor seventh chord). It's also called a mixed-third chord. In jazz chords you will also sometimes see it notated as a ♯9 instead of as a ♭3, though that implies a slightly different use for the added note – that is, as part of the harmonic "juice" – i.e. a triadic extension to the chord – instead of as the bass.

In practice, however, there's not a single correct answer to "how to think about the G". In fact, when a slash chord gives a bass note that isn't related to the chord, I think it's often more illuminating to simply think of the bass note as a note or part that is independent of the chord above it, rather than trying to think up a warped chord description that includes it. I suspect that might be the case here.

It may be that the music is polytonal; i.e. one part plays in one key while another part plays in another. In that case, trying to mash the two into a single functional harmonic structure and understand the piece that way is likely going to result in chaos and tears.

It may also be that the bass note is not a functional part of the harmony, but rather a line that moves linearly and logically through a progression, but in harmonic conflict with the harmony above it. In this case, trying to figure out the note's position in the harmony might bury its true significance as part of a horizontal line. This kind of horizontal thinking is especially important to develop as a bass player, and I think is the key reason slash chords are written the way they are, instead of via intervals: so that the progression of the bass line is crystal-clear regardless of what comes above it.

The language of chords and harmony has developed not just to tell you what notes to play, but why. It's a powerful tool for communicating a lot of musical information quickly, but it's not the only tool at your disposal.

P.S. Interestingly, in 20th century theory, when wrangling with atonal music, musicologists have given up on the traditional interval system and switched over to using a purely numeric interval system based on half-steps. In that system, let E=0. Then G=3 (it is 3 half-steps away from E), G♯=4, and B=7, so you might call the chord [0347]. I've only seen that done in atonal music, though.

The notation can often give a hint on how to play things. If you were to play the notes E G# B G the most appropriate notation would be E(#9) (or more likely E7(#9) which replaces the B with a D). This indicates that the "odd" note (G) should be played on top.

The slash notation puts the G bass note on the bottom, i.e. it would be played as G E G# B or maybe G B E G#. In a band situation the bass player would pick the G and the chord instruments would probably just play an E chord. It's a convenient way to write out bass line and chords in one go. For example you could write some rock &roll riff like this

E/G is a very unlikely chord symbol, though E/G# is a perfectly good way of indicating a first inversion E triad. Where the major and minor third DO co-exist, the minor third is usually in the upper structure. Some systems insist on calling it a #9, even though your ears may tell you it's more of a b10.

If you did come across an E/G chord symbol, I expect it would be a case of the bass instrument having a melodic line which included a "blue" note. You would need to question whether it was useful to include it in the chord symbol at all. Consider, for instance, whether there's the slightest point in the second bar's chord symbols here:

This sort of thing is also not uncommon. Maybe even more so over a dominant bass note. 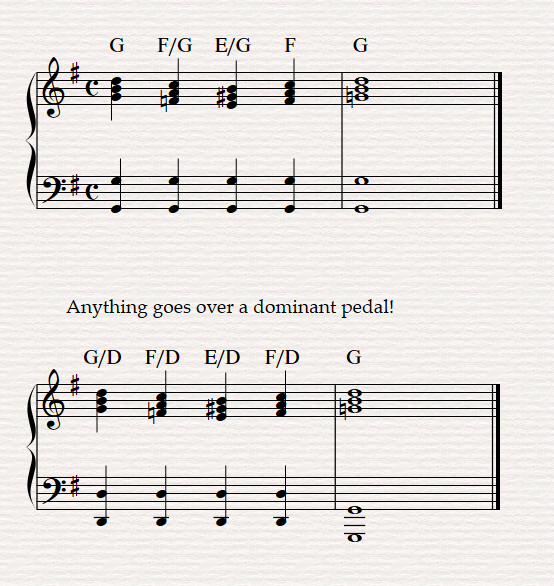 "Slash notation" is also known as Macro-analysis, which is an analytical tool sometimes used in analyzing compositions. Most of your confusion lies in the fact that the chord in question is actually mislabeled. Before I answer your question, I will briefly explain Macro-analysis.

Macro-analysis is derived from the practice of Figured Bass, which was a shorthand notation system for realizing harmonic accompaniment (along with continuo lines) as part of performance practice during the Baroque period. Over time, the use of Figured Bass became less and less frequent with analysts favoring macro-analysis as composers became more specific with their notation. Macro-analysis is particularly useful when labeling non-functional chord progressions.

The first letter of the chord "E/G" signifies what chord is being played. The second letter of this chord signifies which note of this chord is played in lowest voice; thus giving the inversion of the chord. This label would be more correct if it were written "Em/G" or "e/G" where the "m" signifies "minor"; the same as if a lowercase letter would as well. The "G" itself indicates that the chord is in first inversion such that the notes in the chord from lowest to highest in closed position would be "G,B,E".

To answer your question directly, you are correct in saying that "G" is a b3 (minor third) with respect to E major. However, in chord labeling the note merely identifies the inversion of the chord.

I played this chord on my guitar just to hear how it sounds like: if you play G (natural) on the bass, it creates a super-dissonance, especially between the G bass and the G# of the triad, unless you want to compose this kind of music, I would not say it's a great sound . Otherwise, if you play the G (natural) in the higher octave, it sounds Blues ! A common E chord with a raised ninth (or diminished 10th, if you like) and in this case, it defines the bi-modality of the Blues genre (meaning= you can play both major and minor pentatonic, blues scales)

In a book that spoke about getting comfortable with all sorts of tonality and sounds, the author gave the example of an exercise to keep the triad constant while varying the bass note through all 12 note names. (The book also gave the exercise of keeping the bass constant, yet varying the major triad above through all 12 to see what would result.)

I specifically used "triad" in the first paragraph, yet many times in playing situations we use the word "chord" for any kind of multiple-note grouping including 3 and only 3. So next . . .

Some of these will be very dissonant, yet may produce the desired effect within a given song.

Some of these may already have different names. For instance, E/C# is C#m7.

Some of these will be good to use in places where you need to connect one chord with another. Alone they may not sound intriguing, yet in some places the E/G# would make more sense to lead from or to than hopping to straight E.

Some of these will be the chord of the moment. In some musical times like the 70's, the E/F# type of chord was very popular.

In this set, my personal favorite is the E/A chord. You spoke about 3rds and major vs. minor. What I like about E/A (and the same chord type in other keys) is that it specifically has no 3rd laid out this way. Adding the 3rd, however, would change its characteristic. Would the 3rd be C for Ammaj9? Or C# for Amaj9? I want neither, I distinctly want the E chord sound above and the A sound in the bass. It provides a certain kind of tension, just like your E/G does too.

In other eras, it was forbidden to mix certain notes. Religious institutions prohibited it. In later times you can mix any notes you want.

Like that book I was talking about emphasizes, your E/G is fine for certain kinds of music. I seem to recall the band Rush uses many of these slash chords. A lot of times the whole slash thing is to emphasize something different is happening in the bass than we usually expect from the rest of the music. Music theory serves us well to understand certain concepts, and then we have the freedom to break it.

And sometimes, if you want to leave your audience hanging, purposely end with one of these chords where the bass doesn't "match." Finish your entire song that was in E with your signature E/G, either quickly or with a fermata and say nothing after that.

32
Why is bass note so important in harmonic analysis of music?
6
What are G7/D and C/G chords?
7
What does the chord notation X/Y (“slash chord”) mean?

21
“slash” chords, e.g. B/F♯ - are these only for inversions, or can any note be the bass note?
8
Can bass chord notes be different octaves after playing the root?
16
Why does a minor sixth chord contain a major 6th interval?
2
Why is a Major sixth A interval an A minor chord in the Key of C?
1
Is C-7 chord associated with one of the three minor scales?
1
Is there a way to determine the flatness (or sharpness) of the 4th note of a chord from its name?
2
Does melody note function change with each chord change in a certain harmonic field?
2
Is it acceptable to use a Maj7♯5sus4 chord? Avoid note/interval clarification