Why does the circle of fifths only show some notes that are enharmonically equivalent?

I was wondering why the circle of fifths only has three keys that are enharmonically equivalent at the bottom of it namely, C#/Db, Gb/F#, B/Cb. Why only those three? Can’t the other notes in the circle also be called different names such as A#/Bb, Eb/D#, C/B#, etc. One thing I noticed is the flatted keys are on the left, and sharp keys are on the right of the circle. Why then did they show C# on the left. 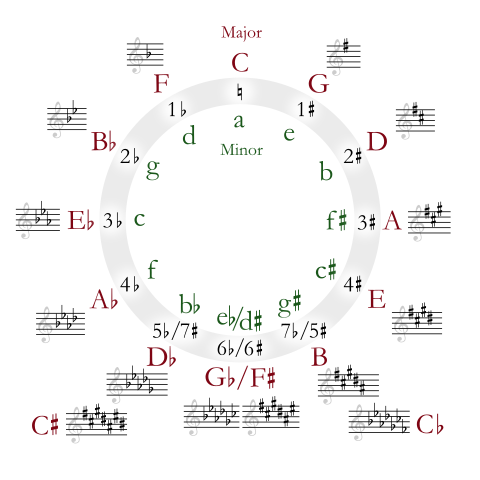 The seven major scales that only include single-sharped notes (G, D, A, E, B, F#, C#) + the seven major scales that only include single-flatted notes (F, Bb, Eb, Ab, Db, G, Cb) + C major are the only major scales that can be constructed using no "double-and-above accidentals" (double-flat, double-sharp, etc.). Of those 15 scales, there are three groups of two where both scales are tonally the same. Hence there are three tones on the circle of fifths with enharmonic equivalents printed, thus the circle of fifths represents all 12 tones of Western tonality (15 - 3 = 12).

Why? Because the designer of that particular chart decided to. I think it would have been more logical to just show F#/G♭, the only one where there is no default spelling.

Don't worry too much about the Circle of 5ths anyway. It over-illustrates a very simple concept. I think it's only included in textbooks because it's a pretty way of filling a page!

It illustrates (but doesn't explain) dominant-tonic relationships. It makes beginners worry over why ♭III, ♭VII etc. are 'allowed' - after all, they're SO far away in the Circle! It shows you 'close' keys that aren't really close at all - moving a song's melody up a 5th or down a 4th will just sabotage the vocalist!

As you can see every single note is enharmonic to the note next to it. It's just not practical or easy to read or play.

It is much simpler to just use C.

It's a completely arbitrary limitation.

Professional quality music notation software will let you write in any key you like, between 7 triple-sharps and 7 triple-flats. (Of course you don't see those key signatures very often, but in case your don't believe they exist, here they are...)

You won't find those keys on a circle of fifths chart because the only people who need the chart are beginners.

I assume the OP doesn't keep a chart of the letters in the English alphabet next to his/her PC to help write questions on this forum, but you will find them on the wall in most elementary school classrooms. Charts of the circle of fifths are at about the same level in musical theory education as those alphabet charts. After a very short while, you simply don't need them any more.

Obviously the two enharmonics are listed to show they are equivalent.

But I think this is a bad circle of fifths chart.

A good one should list the enharmonics for all of the common key signatures. Notice that G#/Ab is missing. A good chart should somehow visually explain the common choices are G# minor or Ab major.

...you just changed the chart!

This chart seems to split the difference.

It doesn't list all the standard enharmonics with each position because the inner circle for relative minor key makes you figure that out. In other words you need to mentally say "Ab is enharmonic to G#, let me find a G# somewhere else... there it is G# minor"

The way you make such a chart depends on what you really want it to explain.

Why only those three?

I think if you really want a chart for the key signatures it should have 15 positions. It would not pair up enharmonic equivalents like Ab/g#, but instead consistently list by accidental count like Ab/Fm. But the point of that would be to recognize key signatures rather than enharmonic tonics. I may draw one of my own - just to get the nagging out of my head - I'll come an update my post.

If a chart for explaining key signatures is desire, this seems to be a straight-foward design... 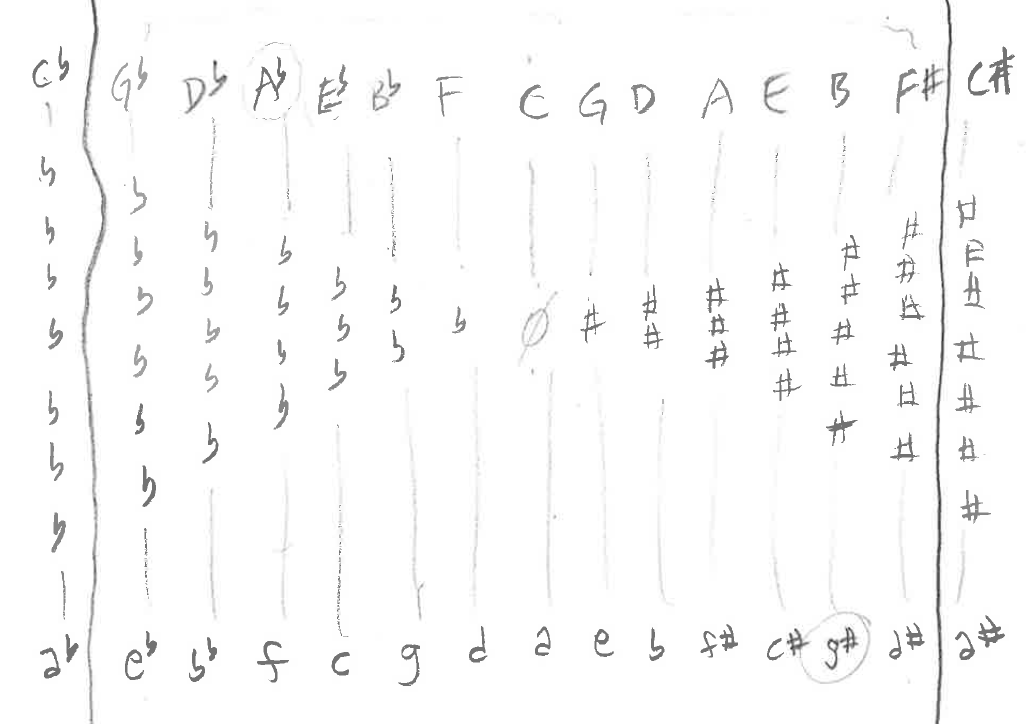 ...emphasis on straight, I don't see any benefit to learning key signature by forming a circle. A circle is good for counting in fifths, but that is different than explaining key signatures.

If you warped that into a circle, it would be something like this, but I wouldn't wrap it around to try overlapping enharmonic equivalents, it will just become a mess... 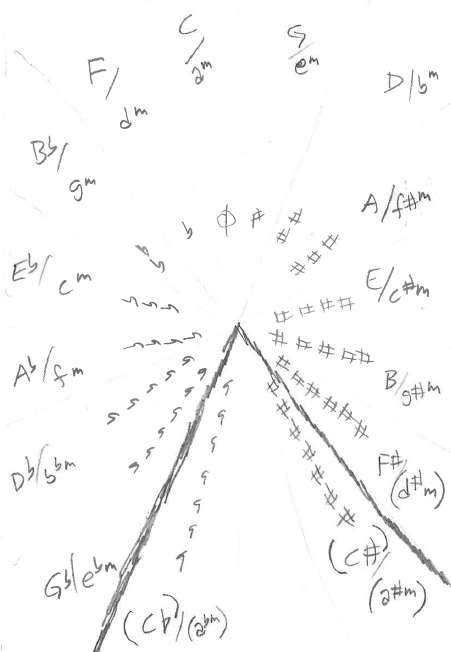 You might ask "why does the typical circle of fifth switch at the F#/Gb equivalency point in the first place?" I think the obvious answer is so the accidental count in the key signature won't exceed 6. Instead of 7 sharps with C# major we jump at F#/Gb to flats which decrease each step until we get back to plain C.

That would be logical and the accidental counts will increase regularly to 8, 9 , 10... sharps.

Obviously we don't because those aren't practical key signatures.

The equal tempered circle of fiths is really a circle, there are only 12 possible major keys. Theoretically, you have an infinite number of possible names for these keys, as long as you allow double (triple, quadruple...) flats and sharps, but there's no musical difference. The reason for the usual cutoff at 15 key names, that is, 12 keys plus 3 enharmonic equivalents (B/Cb, F#/Gb, B#/C) is that this is all the possible keys that have no double flats or double sharps in their key signature.

That's it. It's just a convention and says nothing about the structure of music.

I have right now written a "circle of fifths" in a form of a line:

These are the usual equivalents

I will use this template to note the progression of the prelude in C# major below it. By the way: in this prelude the chords go till B# and e# minor. (So I actually wondered why Bach didn't write this prelude in Db major. But now I know!)

When I started with music I argued a bit like Lawrence: they teach it because it's nice to look at and it's a stuff that can be easily controled in tests.

But today I knwo that it is one of the moste important things for the use of classical and pop music, jazz as well!

Why don't they show all? It would be too much stuff to show all equivalents and beginners would have a bad overview. I for myself often draw only a sector of it above a bow to see it clearer when I make a mind map to memorize the progression.

a circle of fifths in German spelling: 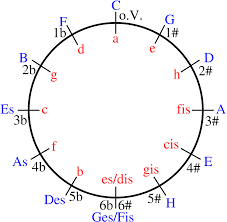 For those who are still picky about the reasoning behind the circle, even after several responses, I think the best way to understand it is through constructing it yourself. The circle of fifths, apart from the obvious reason (only the key for the fifth interval in each point) is made to satisfy grammatical rules, being:

Take a look at this table: 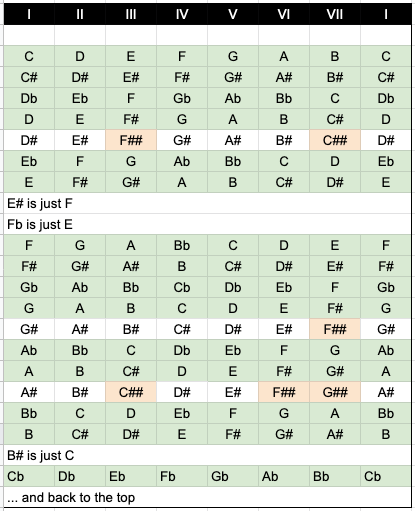 If you try to map out all the keys to build up their major scales, including those that are enharmonically equivalent (C#/Db, F#/Gb, and so on), you will find that those creating double accidentals are being left out, as well as those that are just a natural. All the others are part of the circle. So, it does have a grammatical and practical logic.