Dominant seventh chord in the major scale contains diminished triad of the seventh?

What does this mean, especially "diminished triad of the seventh"?

"Dominant seventh" is a shorthand for what others call a "major-minor seventh," meaning a major triad with a minor seventh on top.

In C major, scale-degree 5 is G and scale-degree 7 is B. The seventh chord on G is G B D F (a major triad G B D with a minor seventh G F), and it includes the diminished triad built on scale-degree 7: B D F. 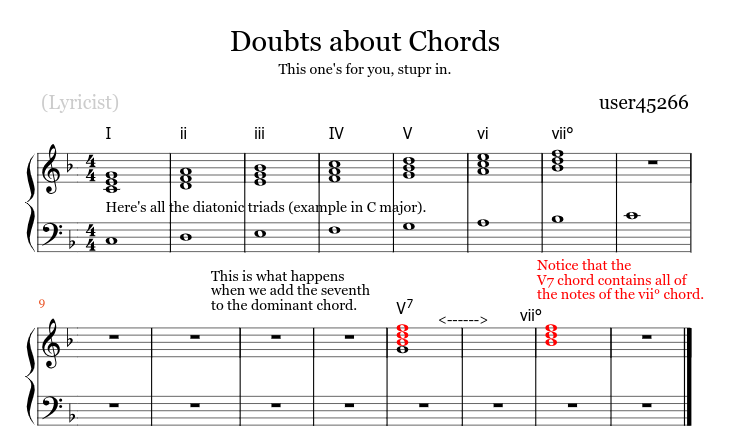 We call the resolution stronger because the V7 chord is much more directional (the vii°7 chord, which would be the diminished seventh chord, is symmetrical and ambiguous). There are other reasons, and as further reading, this post does a good job explaining this resolution's strengths.

I won't explain much of chord theory since it seems clear that you are looking into theory on your own. however, I will explain what is written in the snippet that you posted in your question.

it is referring to the diatonic seventh chord derived from the 5th note of your major scale.

This chord is known as a dominant seventh chord and is denoted as (roman numeral)7.

There are 4 types of 7th chords. ( you can look it up on youtube as I don't want to get into too much theory here )

and what the above line meant was that you can only make a dominant 7th chord from the 5th note of the major scale within the scale. Taking any other note and making the seventh chord from that note won't be a Dominant seventh.

the diminished triad of the seventh means the chord root of which is the seventh note of the scale. So in the case of C major scale, it will be a B diminished chord. The notes of B dim are - B,D,F . . . Seems familiar?

I hope I was able to give you a satisfactory answer. If you have any more queries regarding music theory, feel free to ask :)

That chord - B D F is diminished, and as such, points in no particular direction, neither major nor minor, so is weak in comparison. However, when it's combined with the dominant note of key C (G), it takes on a far more defining role, pushing towards the root C. Incidentally, adding that extra note to Bo gives B D F A, known as Bm7♭5.

13
Can any diminished chord be used as V anywhere?
40
Why do many songs in major keys use a bVII chord?
2
Phrygian dominant scale with a major seventh
13
Why do we only build 7th chords on the supertonic and dominant of a major scale?
2
Is this chord in Für Elise an example of a diminished seventh chord in classical music?
0
Am I right in that it is a diminished triad without the third?
2
How To Build and Name 7th Chords
3
Diminished seventh cadence, is this an IAC or a PAC?
1
Can we understand subdominant/dominant chord functions in terms of them being tonics of other keys?