Do jazz musicians improvise on the parent scale in addition to the chord-scales?

I noticed that jazz musicians improvise on actual chords. This makes sense for modal jazz since the chords in the progression might not be related.

But for tonal jazz, say we have a "ii-V-I" progression. I've seen videos where they improvise on each chord. so the ii7 might have a Dorian scale, the V7 may have an associated Mixolydian scale, and the I might have a Lydian scale.

But what about the parent key? In pop I'm used to people improvising on the actual key. So for example if this was C-major, that's the scale they'd improvise on. Does that happen in jazz too? What scale does the melody come from?

Edit: I wasn't aware how many scales are in an actual jazz song. I just started working on standards in the last few days. so I guess the melody is influenced from the different scales that make up the piece. I was used to pop where the melody was usually just one scale.

Traditional jazz - roughly 1930's to 1950's - based improvisation on embellished arpeggios which followed the chord changes of a song.

Modal jazz moved away from arpeggios on rapid chord changes and focused more on scales as the basis of improvisation.

Later in the 1970's chord/scale system emerged as a way to teach jazz.

A huge list of jazz greats didn't use the chord/scale system.

In that great jazz past, when someone improvised over ii V I, using arpeggios, were they thinking about the "parent key?" Maybe. It's hard to know exactly what they thought. But, we have records and transcripts of solos to know what they played. It can be tricky to talk about inextricably linked ideas like scale/key/chord/melody, even trickier to get inside a past musician's head to know what they thought.

You might want to get improvisation transcriptions of particular solos that you want to emulate and then analyse the music... then try asking questions about how they may have conceptualized what they were playing.

Below is one bar from a Charlie Parker solo transcript...

...the phrase can be analyzed as an arpeggio - broken chord, if that term is preferred - embellished with non-chord tones which I circled in red: an appoggiatura high D and two passing tones B and low D.

The full transcript is at http://www.jasonstillman.com/uploads/3/0/2/8/3028328/charlie_parker_cherokee.pdf

This kind of melodic line is found in lots of solos. In fact you should notice a conspicuous absence of scales - conjunct, step-wise motion - rather you will see a lot of disjunct motion on chord tones.

Keep in mind that when a seventh chord is filled in with passing tones it will produce a full octave scale at which point we can't really make a clear distinction between chord based or scale based although the majority of the material will most likely display chord tone based lines. This filling in a broken chord with non-chord tones was to main point of your earlier question Whole-step technique for figuring out jazz chord-scales?.

Compare to John Coltrane's solo on So What for a modal approach that appears more scale based. I have to show a longer excerpt to reflect the very long harmonic rhythm of one chord for many bars... 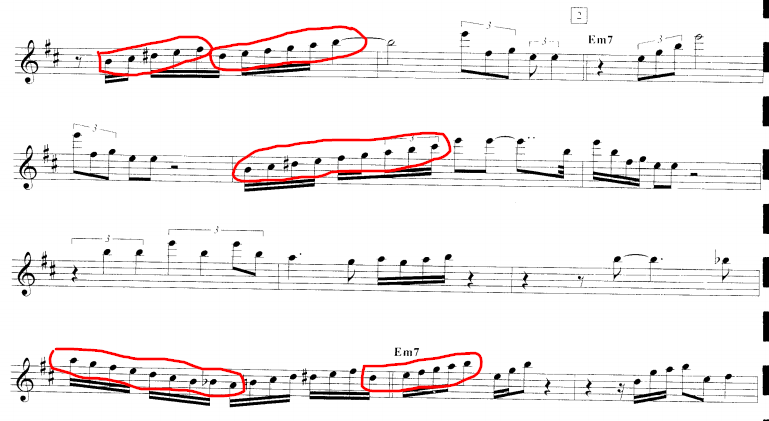 ...notice the long lines of step-wise motion (scalar playing) and there are two phrases that encompass a full octave of straight scale lines. This is an example of scales in modal jazz.

Yes, some jazz musicians improvise on the key, especially when they are improvising from the melody, not the chords (harmony).

The advantage of improvising on the harmony is that you minimize the clashing notes and have a ready palette of color notes that come from ornamenting the underlying chord.

But some jazz musicians improvise entirely from the melody, such as Bill Frisell. In this case, improvising on the key gives you a distinct advantage, because you can concentrate on deconstructing and reconstructing melodic fragments.

I think you are asking whether what you call the pop approach to improvising—finding a common scale/key that works over many chords in sequence—is valid in jazz. The simple answer is yes. Indeed, learning to spot common scales and tones is an important hurdle that many musicians trained to think chord by chord learn to overcome in college.

In the example you've given, a ii-V7-I in C major, note that the scales you derive when thinking about the changes individually actually consist of the same collections of notes:

Thus, if you are simply looking for a collection of notes that works well over all these chords, then C ionian (C major) will certainly do the trick. Of course, jazz songs are more likely than pop songs to switch key centers quickly, but you can still use the same approach. If you have a chord progression like

This is called the key-centers approach.

If the key-centers approach is valid, why do books on jazz improvisation often ask you to think about the chords individually (which is called the modal approach)? Two reasons, both (in my opinion) pedagogical.

First, beginner musicians tend to be biased towards the first few notes in a scale. If you tell a student that the C major scale is valid over the progression Dm G7 C, they will often just repeat patterns involving the notes C, D, and E. Asking the student to think about these as three different chords guides them to other parts of the scale. The same student, thinking about G mixolydian over the G7 chord, now will center their playing around G, A, and B instead. This is still less than perfect, of course, but it's a teaching strategy designed to encourage students to explore the full range of the scale.

Second, and related, is that while all the notes in the C major scale are broadly compatible with these chords, the color and stability of the individual notes depends on what chord you're on. The note F sounds great over a Dm chord; not so much over a C major (although if you move quickly down to E it's fine). When you think about the modes separately, you may be able to spot the stable notes—like 1, 3, and 5—more quickly.

2
How to achieve jazzier improvisation?
1
How do jazz musicians pick chords and scales?
1
Jazz improvisation on descending chord progression
3
Is the melodic minor scale use as the basis of chord progressions in modern jazz?
4
How to turn each chord in a progression into separate scales?
2
Whole-step technique for figuring out jazz scales?
6
Are modes in jazz primarily a melody thing?
4
What scale(s) would I use to improvise over this riff?
0
Common scale tones when transiioning to a new chord
2
How do I learn to improvise outside of the jazz realm?