The following headphone amp has two inputs. I have no idea what the "Link" inputs are.

Does someone know if it is possible to connect 4 inputs in generall?

Purpose: one guitar, one e-piano with two outputs each should be amplified with this amp. 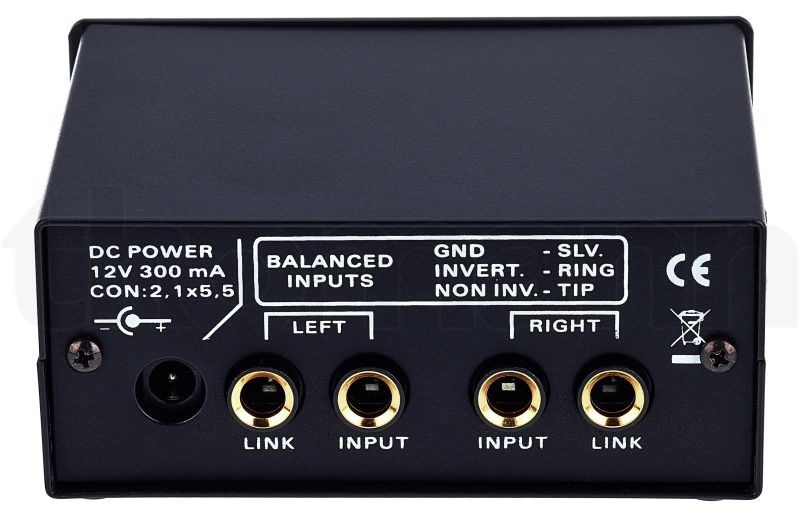 My guess is that the Link jacks serve as outputs containing the same signal that you put in. The Thomann page for this amp states "Input signal can be looped through".

Connecting multiple inputs is not the purpose of a headphone amp, which takes one stereo signal as input, amplifies it, and provides that signal to one or more headphone outputs. To properly handle four inputs, you'd need a small mixer (which usually has one headphone output as well).

As a crutch: many keyboards offer a mono signal if you only plug in one cable. You can plug than into one channel, and one of the guitar outputs into the other. You will then hear the keyboard in one ear and the guitar in the other. Since your amp provides no way of changing the panning, there's nothing you can do about that.

An additional hack, which may or may not work: apparently, this amplifier accepts "balanced input", which means that you can plug a stereo jack into each input, and the amp will amplify the difference between the signals on the left and right channel of that jack. Since your signals are not phase-locked, amplifying the difference is pretty much the same as amplifying the sum. So if you happen to have two "mono jack to stereo jack" adapters, you can try plugging the guitar into one channel and the keyboard into the other. (If you don't, I'd rather invest the money into a mixer.) 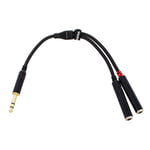 Not the answer you're looking for? Browse other questions tagged amplifiers headphones or ask your own question.

3
how to use a headphone with a D.I. output?
1
Is it possible to create an effects loop with an amp that does not have send and return, with a mixer?
0
Ohm ratings for guitar amp / extension cab
5
Fender hot rod deluxe connected to speaker simulator diagram
1
Can I Wire two cables together to get two inputs into one output
2
Connecting Laney MINI amp with iPhones (Without headphone jack)
2
5 watt tube Amp has 2 8ohms outputs and I have 2 1x16ohm speakers. Can I connect them together?
3
TRRS > 2 x TRS bypass to amplify laptop headphones not working, headphones channel mute