What are the diatonic extended chords of C major?

I'm confused at the notation, For example the iii and vii chords of the 9ths chords look like Em7(♭9) and Bm7(♭5 ♭9) why do they flat certain notes and call them seventh chords? It makes me unsure how to notate 11th and 13th chords.

So what are the diatonic 11th and 13th chords in C major?

The diatonic extended chords of C major appear below. 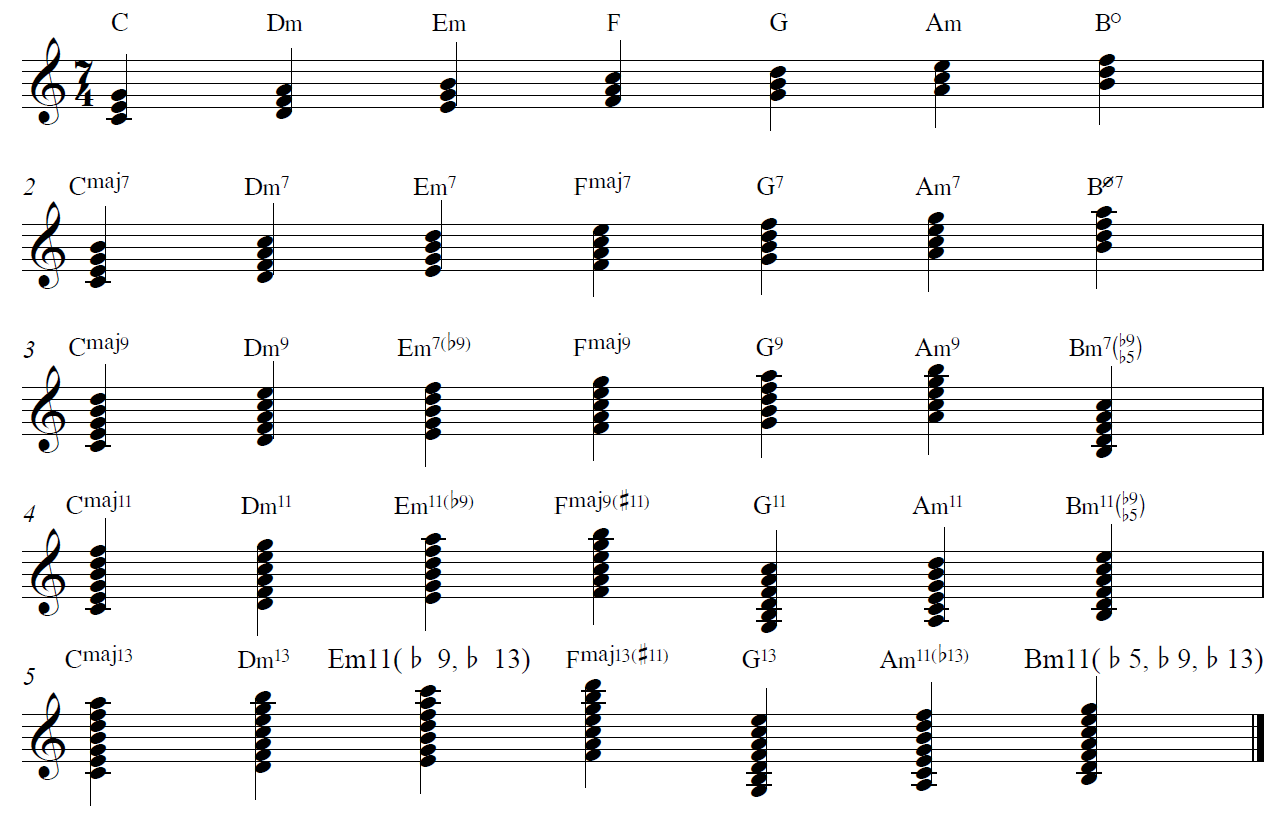 Perhaps your confusion stems from the fact that the chord symbols contain sharps and flats when, in the key of C major, the constituent notes of diatonic chords never do. These alterations are necessary because chord symbols consistently assume a particular quality for every interval that participates in the chord.

The alterations you see in chord symbols (♭9, for example) are exceptions to the assumptions about those intervals. To keep the symbols as compact as possible, each interval within the chord symbol has a default or assumed quality.

Since you asked about the chords that are diatonic to C major, the alterations are necessary to keep the constituent notes in that key. That's exactly the case with the ninth in the E and B chords in the key of C major. You would see the same alterations on the iii and vii chords in every major key.

If you were to use the "default" major ninth interval with an Em7 chord, you would be playing an F♯. Nothing prevents you from doing so; Em9 is a perfectly good chord. However, F♯ is not diatonic to C major. To get an F which is diatonic, we need to apply a flat symbol to the ninth, thus taking the F♯ down to F. The same applies to the eleventh on the F chords. A perfect eleventh up from F is B♭. To get some sort of B that's in the C major scale, we raise it. Thus, a ♯11 in the symbol takes us up the semitone we need to get from B♭ to B♮.

You may also wonder why the extension numbers are written the way they are. For example, why, among the thirteenth chords, is it Am11(♭13) and not Am♭13? By convention, you write the highest unaltered extension (11 in this case) and then list the alterations.

This isn't a real answer, but an addition to @trw's chord chart.

...I'm confused at the notation, For example the iii and vii chords of the 9ths chords look like Em7(♭9) and Bm7(♭5 ♭9) why do they flat certain notes

(*) These intervals differ from a diatonic dominant 13th chord and so the jazz chord symbol requires modifiers that detail the changed intervals.

I hope that isn't too confusing changing roots and comparing intervals.

Look back to @trw's chart and notice all the G chords are simply the root letter G plus the highest extension number. All the other chords have one or more modifiers for each interval above their roots that is not the same interval above the root of the dominant chords.

The complete list of all diatonic chord with extension up to the 13th, written in jazz chord symbols, is a nightmare! But maybe we can take a step back and look at vi ii V I which is the practical basis for a lot of jazz harmony.

All four of those chord types start with the root letter and extension figures without any accidentals (except the crazy Am11b13.) Then only min is needed for the vi and ii, and maj for the I. This covers over half of the chart! That isn't too hard to manage.

Less than 1/4 of the chart uses true awful symbols like Bm11b9b5b13 and they will surely be much less frequently encountered. I don't think you need to worry about instantly recognizing their diatonic identities.

18
What's an "add" chord?
3
Is there a standard set of diatonic ninth chords in jazz?
3
Naming the 13th chord on the leading tone of a major scale

13
Help me understand this progression
1
Diminished progression
2
How are 13th chords with alterations "shorthand" written?
5
Diatonic chords
7
Harmonic analysis of arpeggios in Dance of the Sugar Plum Fairy
3
Naming the 13th chord on the leading tone of a major scale
2
Is E7 diatonic to A minor or not?
0
Relationship between extended diatonic chords and modes?