Is it common to denote a chord symbol with an arpeggio marking? How else would you indicate that the chord is to be played arpeggio?

The vast majority of chords in piano music are not marked to be played arpeggio, but that still leaves many which are so marked.

Sometimes composers would just write the word arpeggio instead of using these notations. This is to be expected in work from composers who lived before the line notations were introduced. For example, the introductory bars of J. S. Bach's keyboard fugue in A minor BWV 944:

This means that all the chords are to be arpeggiated.

Contrast with this étude by Chopin:

This notation also marks all the chords to be arpeggiated. However, it allows the composer to specify which chords should not be, unlike the general arpeggio term.

These examples are different in another respect. There was great freedom to the performer in how to arpeggiate the chords in Bach's time. As the note durations are long in the example, the performer might play up and down the arpeggio slowly, to fill the entire measure, instead of playing fast from bottom to top only.

At other times, composers took still another approach, writing out the arpeggio directly with grace notes, as in this example from Mozart K. 309: 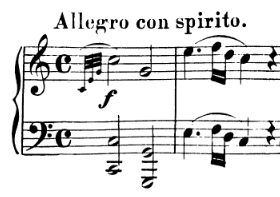 As far as I know, for instruments that use chord symbols (not piano, but guitar maybe), no, this is not common. Chord symbols break down when trying to convey performance text specifically like that in general; how one chooses to convey that arpeggio is up to the transcriber/composer.

However, any well-trained musician in music theory should recognise what your proposed system is trying to say. Even beginners might guess at the meaning, but most intermediate musicians with some music theory training would get it.

I wouldn't advise doing it if you don't think the performers will understand. Of course, if the symbols are for you, then of course write it however you'll remember it!

For piano music it is common to mark the chord with one of the usual signs. (Look up the other answers.)

But in simple chord accompaniments for guitar in folk - and pop music it is up to the interpret if he wants to play arpeggio or a strummed chord. This means: There is not a common sign.

(I didn’t understand the question in the sense that you were asking as a songwriter or composer how you could mark a arpeggio for the players.)

Another commenter explained the arpeggio symbols used in staff notation, but your question is about chord symbols.

The principle behind the chord symbols used in jazz and pop music is to let the instrumentalist follow their own intuition in choosing voicings and textures. If there is a specific arpeggiated pattern you want, it's best to simply write it out note by note, or write out one bar of example notation and then write the word simile over the subsequent measures.

If you don't have a particular arpeggiated pattern in mind, you can simply write the word arpeggio near the chord symbol. Any literate musician will understand this to mean that they should improvise their own arpeggiated pattern.

When you'd like them to stop arpeggiating, you can use the word comp in jazz, or simply end arpeggio or something to that effect.

Another option is to refer to a specific style of arpeggiation, like montuno, Coldplay, or in the style of John Lennon's "Imagine." A pianist experienced with reading jazz and pop charts will know what these things mean.

My larger point is that if there is an accompanying technique that you feel you can describe better in words than in notation, then you should simply use words. Many beginning composers feel pressured to use the "proper" Italian terms and musical symbols to communicate their ideas, but it has long been a staple of notational practice for composers to add instructions in their native languages.

Not the answer you're looking for? Browse other questions tagged piano chords notation technique or ask your own question.