How can the intro to the song “If I Fell” be analyzed? 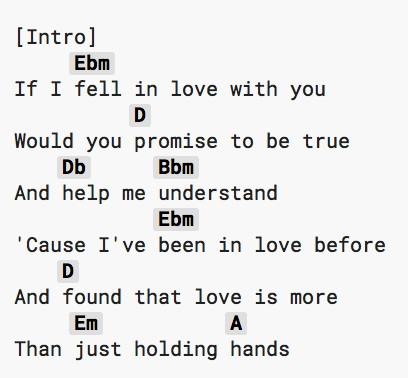 The introduction to this song by The Beatles starts off in the key of Eb minor. I'm trying to figure out how to analyze these chords.

The first D major chord is the one I am unsure about. The intro clearly sounds to be in Eb minor, so I don't know how the D can be analyzed. I'd appreciate reading any thoughts on this chord and where it might be coming from. Thanks in advance.

Don't be fooled into thinking the first chord in a song is tells the key the song's in. This song is in Db - probably better called C#. They actually played it in D, although it comes out as C#.

Given that it is in C#, the first chord is D#m. Second is correct at D - D7 sounds better. That's known as a tritone substitution, which is instead of G#7. Taking the two notes from G#7 - the 3rd and 7th - B# and F#, which together make a tritone (the interval of 3 tones). They are swapped round to produce the tritone of F# and C also found in the chord of D7.

The melody to the first 4 chords strongly outlines Db major, so I'm inclined to analyze

Here bII, the Neapolitan, is not functioning as a predominant, as is typical in classical music, but as a chromatic passing chord from ii to I. The underlying chord progression, ii-I, is a variant of the plagal cadence and is common in Beatles-era rock.

The next bit of the verse sounds as if it's going to repeat the same chords, but just when the tonic (Db) is about to appear, the harmony suddenly shifts to diatonic chords in D major, the key of the remainder of the song. So the second D major chord is a pivot chord, as the OP suggested.

Note that at the end of the song, when the words "if I fell in love with you" recur, the harmony is Gm-D, iv-I, a strong plagal cadence that's only one note different from the opening bII-I (after adjusting for the change of key).

Alan W. Pollack has an excellent article on this song here:

He analyzes the intro in detail. I agree with his take on it personally. The first 6 bars are in Db and the D chord in the 6th bar is the pivot chord that serves as both the bII in Db and the I in D. in a nutshell:

I do not agree with the tritone substitution explanation mentioned above. First, it is a D triad, not a D7 and saying D7 "sounds better" is opinion, not analysis. Tritone substitution is legitimate for dominant 7th chords but it doesn't apply here. It is simply a descending chromatic major triad passing chord that magically turns into the tonic in the new key in the 6th bar.

Not the answer you're looking for? Browse other questions tagged theory chord-theory analysis or ask your own question.