Is my guitar’s action too high? 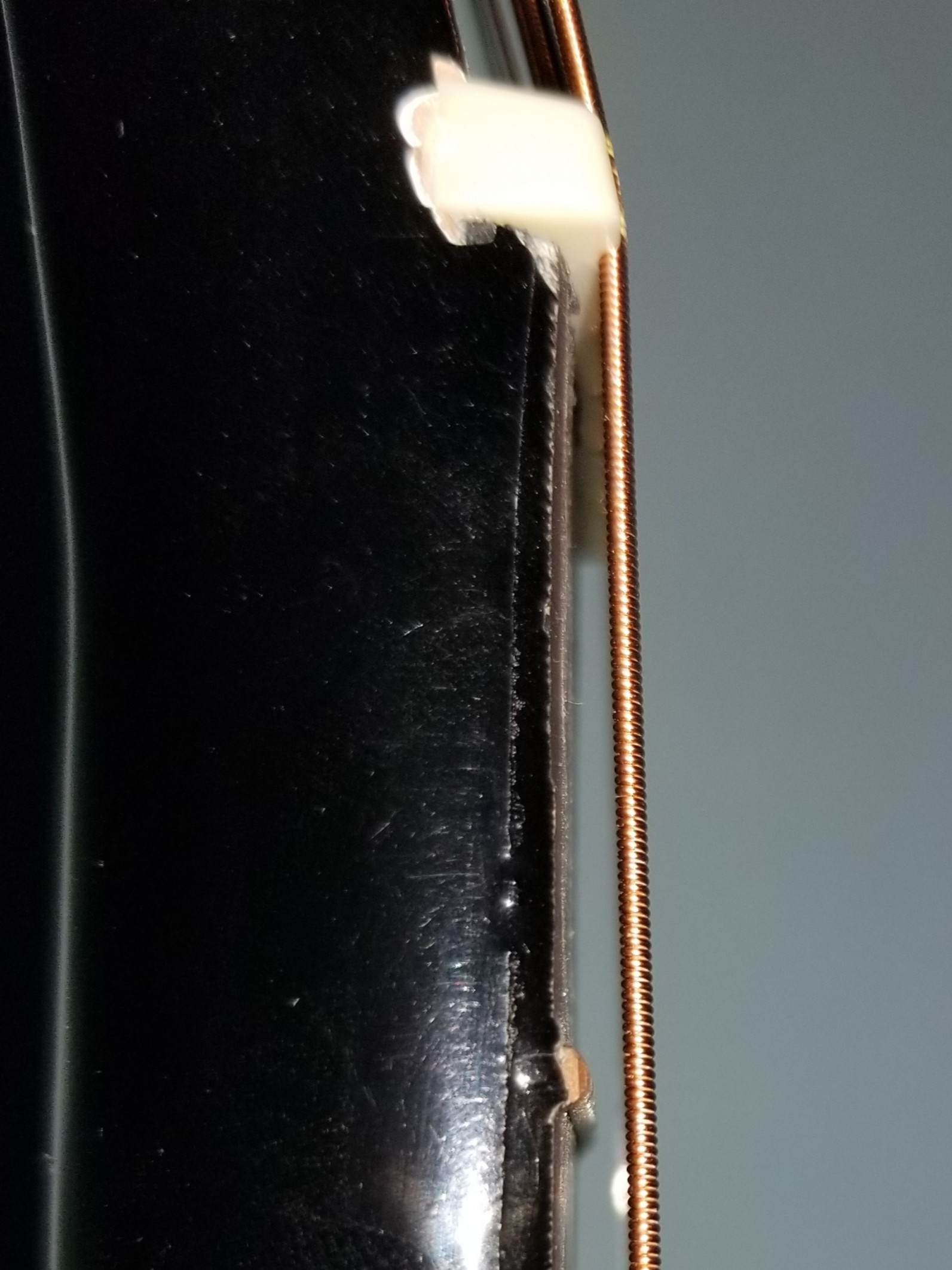 This is the first fret of the guitar

I have trouble playing barre chords and when I play open chords my fingers get sore easily.

I have friends that play guitar and they said that it's hard to press.

I'm porting this to the answer space just to have somewhere to hang the photo...
It doesn't really constitute an answer, though it could become one once we have more info.

I'd like to see another pic of more of the neck, because that is starting out at one heck of an angle; so either the neck is bent way out of true, or the action at the 12th fret is about half an inch:\

Quick snap of one of my 6-strings & the bass it just happened to be leaning against, showing a much 'flatter' slope to the action as it progresses up the neck. 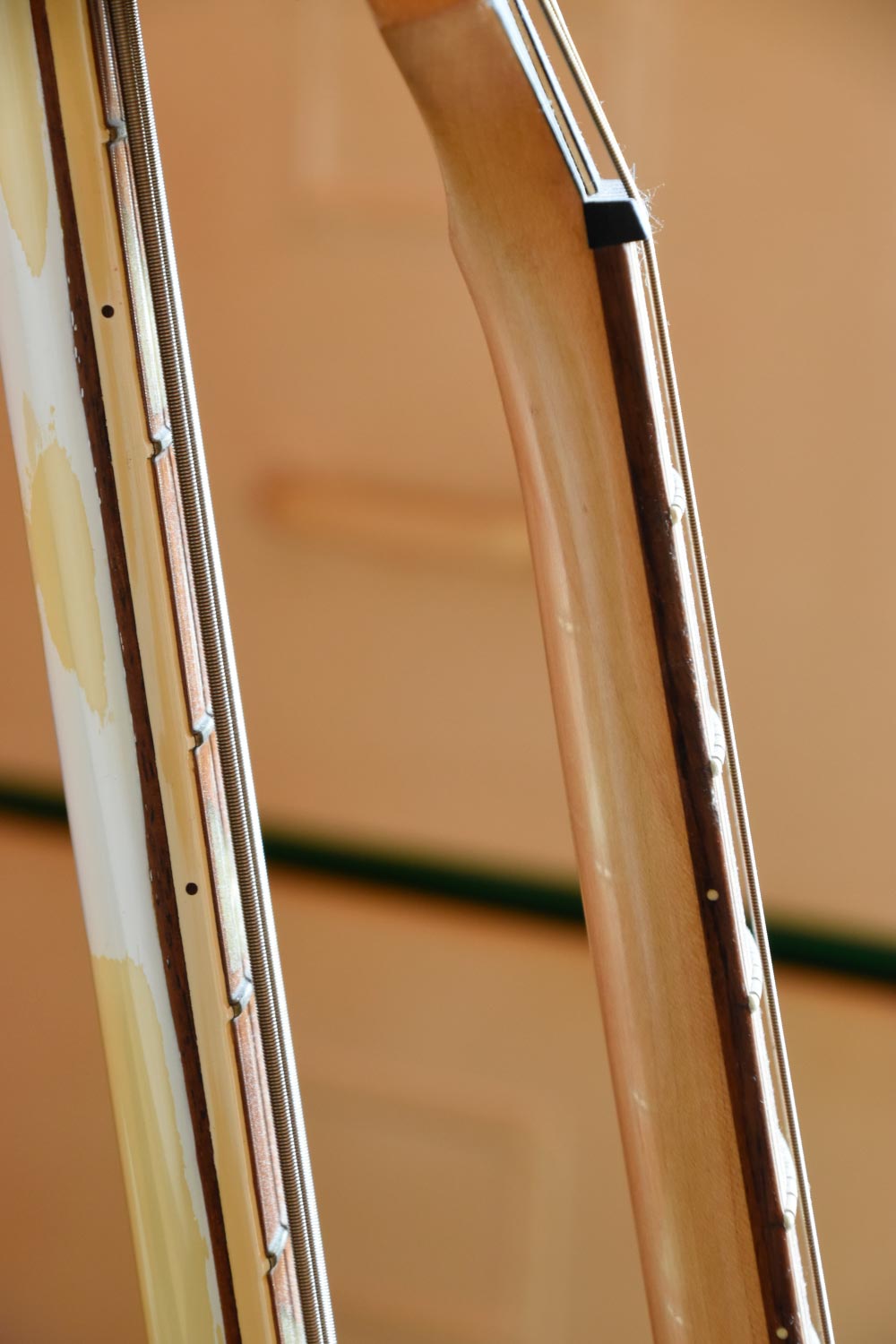 Should I offer prizes for the first person to correctly identify both? ;)

As noted elsewhere - the issue could be the neck relief [ie, the amount of curve it has in it] or it could be the overall action at the bridge is set too high... or indeed a little of both.
I'd be hesitant to cut the nut any further, it already looks slightly deeper than optimum to me.

It does look high. This could be due to a couple of factors.

The neck may be bent. All guitar necks have a slight bend in them - it's called relief - to stop the strings buzzing on any frets. But too much relief will give your symptoms, and is remedied in part by tightening the trussrod. Not recommended to be done by the inexperienced.

The action may simply be high due to the saddles/bridge being too high. On a lot of guitars, the bridge has a couple of adjusting screws that lower and raise the whole bridge. Others have individual saddles which are adjustable for each string's height. Some have a bridge that cannot be altered except by shaving some off it.

Without a view of the whole of the neck, it's difficult to say more, but lower guage strings often help, as they are not under so much tension, thus being easier to fret. Last resort would be deepen the nut slots, but not particularly recommended.

There's a lot of discussion on this, and a good luthier can set up your guitar to play as comfortable as possible. There are three ways to lower the action, although the guitar gurus will tell you never to adjust action by adjusting the truss rod. The other two ways are by adjusting the depth of the nut slots, and adjusting the string saddles at the bridge. You need to deal with all three of these adjustments to get the right mix. I like very little relief, almost flat in fact, so I turn the truss rod counterclockwise and press down the G string on the first fret and the last fret and see how much string clearance there is at the 12th fret. I then adjust the bridge saddles as low as they will go with out buzzing or fretting out (where the string hits the next fret and goes dead). Then I cut the nut slots with nut files (or sandpaper on a feelers gauge) to as low as you can go without fret buzz. Actually the nut slot adjustment is the most important, especially for playing chords near the nut. It's a tricky practice, that's why so many guitarists pay their luthiers to do what is called a "setup", which is basically what I just explained.

Only you can determine if the string action is too high. Lowering the action can give problems with string buzz, and especially if you are striking the strings hard. But give it a go to lower the action. The guitar gets easier to play with lower action.

Another thing you could try is to just change to thinner strings. Thicker strings gives more tuning stability and a slightly heavier sound, but they also makes it harder to play.

But yeah, from the picture I'd say that the action is VERY high. You probably should make the groves in the nut deeper.

That height is definitely not a nut issue, the nut looks low enough. Have you had anyone help you set the neck bow? How is your bridge height? You could try adjusting the neck first and then the bridge height second. Another option, not sure what gauage strings you are using but you could try a lighter set. I know at least one string maker ( i think ernie ball) makes a set with lighter bass strings and heavier small strings. I liked the sound and feel of that set. They are a lot easier on your fingers.

Or like some of us have done, suck it up and keep playing until your fingers build enough callous that you don't feel anything anymore :P

Not the answer you're looking for? Browse other questions tagged guitar electric-guitar acoustic-guitar or ask your own question.

5
What are the correct mechanics for a guitar F barre chord
3
Is the action of my guitar really high?
2
With guitar, how long should I give my fingers to strengthen / callous?
0
When playing a fret the guitar sounds muted
3
I think my guitar strings are wound too tight and I can't play barre chords
0
How to find to the right strings of a barre chord by feel?
1
High action on higher fret on my steel acoustic guitar
1
High E string sounds weird even though it's tuned
0
Playing a specific high note on my highest string also plays a half step higher
1
Guitar strings too high off the fretboard