I'm wondering if chords usually move down by fifths. It seems so by the diagram, so iii to vi, vi to ii, ii to V, V to I. etc. Other chords can also be thought of like that, because IV/ii and V/vii are often interchangeable. So IV -> V can be thought of as ii -> V.

Is that the most typical movement of a chord progression?

See 4:55 in the video below. This is one of many teachers explaining this flow. I've seen this flow myself in plenty of songs I've played.

I'm wondering if chords usually move down by fifths.

A ponderous question. It is simple in presentation but difficult to answer depending on the OP's background. In order to properly answer this question it needs to be properly unpacked:

So now that we've unpacked the context let's look at the actual question:

I'm wondering if chord [progressions written in the Western European Classical musical tradition between the years 1600–1930] usually [contain root movement] of mov[ing] down by fifths.

And here's the answer: it depends

You see, progressions stem from cadences. Cadences have different types of strength. Not all are the same, and different cadences are used for different reasons. This is the result of building and releasing tension. In the Western European Classical musical tradition, an Authentic Cadence is the strongest (with a PAC being the strongest of the two). The interval from tonic to dominant is the fifth.

If we cycle backwards, we run into what's known as the pre-dominant. The root note for the IV chord is known as the "sub-dominant" as it is a fifth below the tonic.

Thus if we look at the following progression:

We see that while the roots of both intermediary chords are in fact, a perfect-fifth away from tonic, the root movement between them is actually only a major-second. In other words, it does not move "down by fifths".

Why are these chords so popular?

As the OP stated, the perfect-fifth is the most harmonically-pure interval after the octave and perfect unison. The above chords are therefore, with respect to their interval, the best suited to give the strongest progression.

This chord is wonderful as gives the impression of IV-V, while giving descending root-movement of perfect-fifths. While this progression is very popular (especially during the Baroque period, in which the clearest examples of root movement by descending fifths may be found), it does not and cannot constitute the majority of written music.

Alright smart guy, so what about the other chords?

Sure, ii may be substituted for IV, as I described above. Other chord substitutions are weaker: iii for I or V, for example, vi for I or IV. Substituting vii for V gives you a leading-tone chord, which has root movement by minor-second and doesn't fit the "descending by fifth" theory. Let's put some of these substitutions in context:

As you can see, substitutions do not intrinsically beget root movement that fits your model.

But all of this is merely looking at how root-movement by fifth is possibly used, not whether or not composers employ them more than any other progression. The fact of the matter is that unless an individual has compiled data for the entirety of written music, it is impossible to answer with 100% accuracy. That said, we need to think about what is the "most likely".

The fact is composers use a variety of chord progression (and regressions) to suit their needs. Theory is developed to try and explain how it is that they make the music that they make. Theory comes after music, not before, and it is just that, a theory. Simply wanting something to be true doesn't in fact make it so.

So root movement by fifths? During one period of human history in the context of one musical tradition, it was a widely-used musical device.

I think you are overlooking an important part of that flow chart: the curved arrow to the right of I means "the tonic chord can move to any other chord."

So, that results in a super common progression I ii6.

The rest of the flow chart does display descending fifth progressions with some options variations like IV ii and vii0 V.

Of course IV V is absolutely essential to functional harmony and that is root progression by step.

Step-wise movement of 1st inversion chords is completely missing from the flow chart.

Keep in mind that a lot of harmony by descending/ascending fifth will occur as sequential harmony. In terms of phrasing and structure in common practice those sequential passages don't just happen anywhere. There are structural conventions to consider.

Anyway, IV V, I ii6, and V vi are so super common that we really can't say progression by fifths is the usual movement.

The flow chart isn't "wrong" but it leaves out a lot of important information about formal structure and harmonic conventions in common practice music.

There are two melodic clauses - probably the most usual:

Both are leading a fourth up or fifth down.

also the usual bass-line that goes do re mi do, fa so la fa or so la ti so, do re mi do etc.

They are developed by counterpoint as well they are basic for harmonic progressions! (Since Baroque - if not even Gregorian chant - till many popsongs and walking bass in jazz.

Btw.: this question is related to another that has been asked recently about the circle of fifths which is actually a circle of fourths.

Another reason is: that dominant and secondary dominant chords have two tones in common.

The other most usual progression is IV-V. We wonder that here are no common tones. A possible answer/explanation could be: The progression IV-V is actually a whole turn round skipping the whole circle. (That’s what I read in my first theory book that I held in my hand with 17 years.)

"Usually" is arguable. Not every chord progression is downwards by fifths only, but there is something to be said for that sound of a descending fifth.

Lots of common chord movements do follow this pattern. The ii-V-I, ubiquitous in jazz music, is two consecutive root movements down by a fifth. In general, resolutions downward by a fifth seem more final than others, but of course there are no hard rules for this kind of thing.

I've seen this exact kind of chart in some of my education (ta-da!) 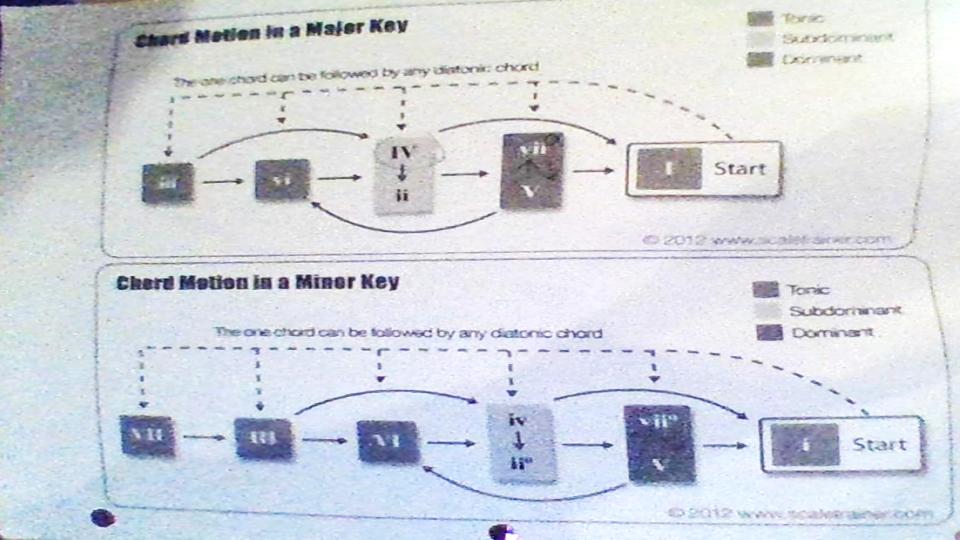 , so you're not alone. The image marks the work of www.scaletrainer.com, but I came into possession of it from an instructor. I've even seen the same diagram on musictheory.net (scroll down). But I quickly realised the limitations of the chart, and I get the feeling you already have as well.

The vast majority of chord progressions in the classical theory move, four forward, one forward or three steps back. That is the easiest and best way to move between chords.

No. It's not ALL about 'the circle of 5ths'. You really need to let this one go!

The teacher in that video is stating 'rules' that just don't exist. (I think she's obsessed with the 'circle' too :-) )

5
Diminished chord with one raised note
12
How common is the complete circle of fifths progression?
4
How are keys in the circle of fifths related?
2
Chord progression analysis
6
Harmonic functions of chords in “Killing Me Softly”
5
How do I rationalize this interesting chord in Mozart K. 331?
4
Descending Minor7♭5 Introduction/Motif Questions
14
Significance of pop songs with progressions that alternate one chord with one that's three semitones below it
2
Is there a common name for this common chord progression
0
Why does this chord progression work? I feel like I've heard it before but can't find the pattern