I was browsing through mics on Amazon and quickly realized I was out of my depth. There are a couple closely related questions I am wondering about:

There are two (popular) types of microphones: dynamic microphones and electret/condensor mics.

They work like a speaker in reverse. Sound moves a diaphragm/coil assembly. The coil moves over a magnet and a current gets induces. Hence we have voltage.

They work by having a diaphragm moving against a statically charged electrode. Moving the diaphragm changes the electric capacity of the contraption which modulates the charge current. The current is super tiny so all microphone of these type have build in pre-amplifier that needs a power supply. This supply either comes from a battery, an external power supply box, 48V phantom supply from a mixer or interface box, or from the USB spigot. Electret are mostly omni directional but some are also cardioid or supercardiod or even switchable. We assume an omni here,

Because of the trade offs listed, most people use dynamic cardioid microphones in live situations and an omni-directional electret/condenser mic for recording. Electret are cleaner and truer to the original sound source but they need to be carefully managed in terms of placement, gain, noise, clipping, and external noise pick up.

Tip: if you are into DIY projects you can build your own with a very inexpensive electret capsule (such as the Panasonic WM-61A). See https://pantherfile.uwm.edu/type/www/audio-reports/PanasonicWM-61A_OtherBinauralRigs/WM61A_Webpage_Caps_Mounts.html. These can make remarkably good mics that sound as good as commercial micd that cost 100s of $.

Guitar-and-vocal studio and live micing has been studied heavily, yet while there are a lot of recommendations, perhaps the foremost among them is "experiment". Now, that advice is generally aimed at the professional recording engineer or home studio enthusiast, with a locker full of microphones to choose from. Someone looking to buy their first mike, like yourself, is going to need a good way forward, so the mikes you buy will be well-suited to the task.

Probably the most common technique for studio recording of a guitar, because it's very simple, is to take one large-diaphragm side-address cardioid condenser microphone, like an AT4040 (about $300, well-known and respected among pros), and position it between 6 inches and a foot away from the guitar, pointed somewhere between the neck/body joint and the octave marker on the fretboard: 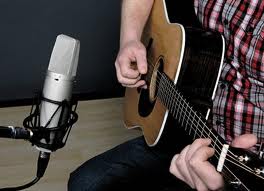 This is a single "close-mic" approach; it'll get you a bit of everything, from the actual strings' brightness to the deep resonance of the body chamber, to the sounds of you actually playing the thing, moving your hands and fingers around. You can experiment with exactly where the mic is; in the image, it's moved up in the direction of the neck, but still pointed at the neck/body joint. This gets the mic out of the way of the performer and anyone who may be watching his hands.

You can do the same thing with a small-diaphragm condenser as well, but the large-diaphragm will be more sensitive, so you can back it away and reduce the proximity effect and the amount of string noise, while still getting a sound that fills your ear instead of sounding like the microphone's all the way across the room.

Another very common technique is the XY-pair. This approach is designed to mimic the way your ears would hear the guitar if you stood in front of it. Same basic placement, but instead of one large-diaphragm condenser, use two small-diaphragm "cigar mikes", like Rode NT5s ($430 for a matched pair; generally well-liked in their price range though there are many others to choose from), arranged at 90* to each other and 45* offset from whatever you're pointing it at: 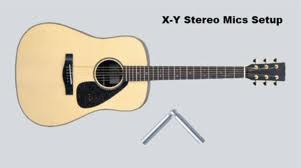 This arrangement is the most straightforward way to get a stereo recording of just about anything; one mike is your left ear, the other is your right, and there will be a natural amount of crossover between the two, which you can play with using the channels' pan knobs on the mixer to create a "wide" ("left" mic panned hard left, "right" mic panned hard right) or "narrow" ( both mics close to center) stereo image.

The nice thing about either of these setups is that these mikes are just as good for the human voice as they are for guitar; they need to capture all the same frequencies in about the same overall balance, at about the same dynamic levels. So, once you have the mikes positioned well for the guitar, just start singing, and make minute adjustments as needed to get more or less of your voice.

You can provide another condenser of just about any type (side-address, handheld, cigar) specifically for vocals. However, caveat soundman; first, the more mikes you have, the more effort you spend and the less success you have isolating their sound sources (the vocal mike will pick up some guitar and the guitar mike will pick up some vocals). Second, more mikes == more $$$. I'm recommending mikes that are expensive but a good value; you want these mikes, and not their cheaper lookalikes, but the money will mean that you get fewer of them, so I'm encouraging you to use fewer mikes for more purposes, instead of buying a cheap-sounding mike to point at everything you might ever want to record separately.

There are other, slightly more esoteric setups for micing. You may hear of the "mid-side" setup; it's one cardioid cigar mike pointed at the neck joint, with a second side-address mic with a "figure-8" pattern right underneath or behind it, with the travel of the diaphragm positioned parallel to the fretboard. The figure-8 pattern mic's signal is then split into two channels, one out-of-phase with the other, and when you bring it all back together in the mixer, the result is a stereo image that you can "narrow" or "widen" by adjusting the out-of-phase channel's fader. Other setups find "sweet spots" on the surface of the guitar's soundboard and close-mic them with cigar mikes, or seek to capture what the guitarist hears from his/her instrument with an "over-the-shoulder" mic (hey, if the guitar didn't sound good to you while you played it in the store, you wouldn't have bought it, right?), all very similar to approaches seen for other instruments.

Exactly what you want to do will determine the mics you will want to use to do it. Personally, I would go with a pair of cigar mikes, because they're extremely versatile; they can go places a larger mike can't, and you can point them at almost anything and get a good sound. Most of the common mic setups use at least one cigar mic. In addition, they're commonly used for all sorts of acoustic instrument recording, from guitars to solo strings and winds, and they also work well for drums.

The side-address condenser would have many of the same purposes, but with only one mic, you're recording in mono; however, that same single mike would be better than the cigar mikes for solo voice in a studio environment, and many side-address mikes can be set to different response patterns such as cardioid, figure-8 or omni. So, if you want one single do-it-all for home recording, I'd choose a side-address.

Now, for live amplification, these same techniques won't be as useful; they may still work if you're careful, but a sensitive studio condenser mic will start giving you problems when you put it in the same room as the speakers hooked up to the mixer. Such is the nature of live sound; your subject is no longer sitting in an isolated, reverb-dampened booth, but on an open stage, with main and monitor speakers, and the walls of the venue, sending his sound right back at him. In these situations, usually a sound engineer's primary concern is getting the volume he needs out of the mains without feedback, and that means rejecting "off-axis" sound sources using narrower mic response patterns like cardioid/supercardioid, or less sensitive microphones like dynamic mikes or small-diaphragm condensers as compared to side-address mikes.

Great question. What all this really boils down to is the polar pattern or pickup pattern of the microphone. Some mics will pick up more sound from the front and less from the sides and rear. Mics that are extremely directional are good for rejecting the loud drums behind you and also rejecting the sound from a PA speaker that might be right in front of you. Many handheld mics have this type of cardioid or supercardioid pattern. Other specialty mics have different patterns that may pick up from all around or just from the front or back. These may be options for you, but won't be as flexible in the long run.

Once you decide on a pickup pattern for your needs, you can start looking at the mechanics of how the mic works - condenser, dynamic, ribbon ... all that stuff. You could stick a dynamic in front of you and your guitar and end up with a passable result. Personally, I'd go for a large diaphragm condenser since they seem to pick up a bit more of the bass and give a nice sound in a solo context. The range of choices is dizzying, so nail down a price range and pick one based on reviews and whatever else matters to you. More expensive mics have higher quality components that will produce a better sound. Audio equipment gets expensive fast and there's not much payoff over a certain level. You also have to think about WHERE you are recording, as room acoustics can 'cheapen' your sound.

You need to have something to plug this microphone into - typically called a preamplifier or preamp. These are built into mixers, computer audio interfaces or stand alone units. A shure 57 or 58 can really shine with a good preamp. If you plug it into a low quality preamp, you'll get a low signal, a noisy signal or a quiet/noisy signal - yuck. If you have a condenser microphone, the preamp will need phantom power in order for the microphone to work.

Some other ideas for you...

Another option might be a hand held recorder which can be carted around, run off battery power and then transferred to your computer for editing and distribution. Super easy and cheap. And you don't need a computer with you - which is always nice. Other options are recording with a phone using some kind of USB microphone.

I have a video demonstrating polar patterns here:

34
How necessary is a USB Audio Interface?

5
What characteristics should I look for when picking a microphone to record a piano?
1
Which microphone to choose for normal recording
1
Should I buy a dedicated microphone for recording?
3
What do I need for my condenser microphone to work correctly?
4
Large diaphragm condenser mic without pop filter
4
What specification should I look in an audio interface for independent input recording?
1
Make mic sound stronger
2
Best way to use my gear for recording my band’s rehearsals
1
Can my XLR microphone connect to both inputs on my audio interface?
3
What cable do I need from Dynamic mic into mixer and why XLR to TS but not XLR to TRS?