What are the dos and don'ts of positioning your thumb on a guitar?

What are the Dos and Don'ts of thumb position in guitar playing? Are there bad habits or just alternative techniques?

If you consider the purpose of the thumb to be to counteract the pressure of the fingers, then the ideal placement (for playing a chord) would be directly opposite the "center of gravity" of the polygon formed by the fingertips.

But this ideal may be difficult to achieve depending on the length of the strap. I set my strap quite short so the guitar is positioned rather high against my chest; this (for me) seems to help the thumb to naturally rest in an appropriate place.

For a moving line, I try to keep my thumb opposite the middle finger. For a barre, it should be opposite the finger performing the barre.

All of the above is intended to put the least amount of stress possible on the delicate tendons in the wrist.

As KeithS mentions, there are of course exceptions, but I've tried to succinctly state "the rules" without droning on too long. If you need the thumb to mute or fret a lower string, do it; don't say I said don't. Thumbs are fingers too. ("They call 'em 'fingers' but I never seen 'em 'fing'.... Oh, there they go." --Jasper on the Simpsons)

With a low-slung, rock-n-roll setup, you may have no choice but to hang your thumb over the top, but at the extreme this really puts your wrist in a bad position and inhibits your dexterity, IMHO.

if it feels good and if it works than do it. it works for me. jimmy page and billy corgan both does this when both are playing traditionally and when jimmy does his cello bow solo 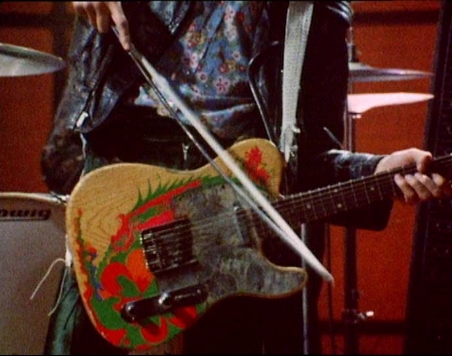 Lat month I had surgery on my left hand to rebuild my arthritic basal joint in my left thumb. My Doctor concluded did not cause arthritis, but my thumb position while playing guitar "may" have contributed to quick degeneration of the joint. Specifically, I would place my left thumb perpendicular along the neck when playing barre chords. I was taught to play about 45 years ago and I mimicked the person I learned from. According to my Surgeon, the best placement of your thumb is near the center of your hand. I apologize if that explanation is confusing.

Instead of using E shape bar chords I tend to use an F shape with all four fingers and then use my thumb to press the base E string. I was getting pains when performing your classic bar chords because I think I was pressing too hard and causing my thumb to bend back more than it should have. Now I use one or the other version of the chord. It all depends on what way my hand position is before the dreaded barchord. I go by the general rule "whatever's comfortable".

More of a singer-guitarist, and not much of a guitarist, but over many years, I have tried to figure out lots of issues regarding muscle tension.

I’ll later describe how to do these at my somewhat currently inactive (7/13/17) blog, VocalPosture.com. Please subscribe, if interested.

As for placement of thumb– my current view is that much depends on how one plays the guitar and the degree of one kinesiology memory. As a singer-guitarist, I’m having enough challenges trying to remember lyrics, finger-picking pattern, vocal methodology, audience engagement….. So, what I think works best is a consistent thumb position, because there is then far less thinking as to what to do in wrist when shifting from chord to chord. That is, whether playing an open A or a bar B, the wrist stays in the same position (not wrapping the wrist thumb on open A and then placing opposite bar on bar B.)

I've been playing guitar for 5 years (I'm 14) and I have found that because I had my thumb draped over the top of the neck that I have Tennis Elbow and am at a risk of my muscles detaching from my arm. So I asked ALOT of imformed people and they all told me that you have to hold you thumb at the middle of or beneath the middle of the guitar neck.or this will happen

7
How to play power chords without fretting hand getting tired?
9
Why do classical guitarists recommend putting the left thumb between the index and middle finger?

28
What are the ergonomic / playing differences between the guitar and the piano?
13
How to embrace the metronome after years of bad habits?
10
Is it really necessary to have your thumb on the back of the guitar neck?
6
What are the advantages and disadvantages of various methods of supporting the classical guitar?
2
What is the correct way to play/mute strings with the thumb?
3
Determining fingering for complex arpeggiations
0
Are there rules of thumb that let me quickly determine a possible playing position from the key?
5
Is it optimal to have the root of your index finger touch the guitar neck?
3
Recommended thumb position and motion when using a thumbpick on an acoustic guitar
4
Why do guitarists specialize on particular techniques?