Identifying “Drop chords” from a given voicing

I'm new to this concept of "drop chords" for guitar, and apparently other instruments as well. Well, I know about chord voicings in general, but not necessarily how the drop-n voicing system works.

For example, say I had some voicing like (left to right, ascending frequency):

How would I name these chord inversions in this system? Also, does this system provide a name for every possible voicing of any seventh chord? A general explanation would also be welcome, though I know that's been answered here before.

What are drop voicings?

Drop voicings are formed by taking a close voicing and dropping certain notes one octave. A drop-n voicing drops the nth note, counting from the top, one octave.

You can find other inversions of the drop-2 voicing by raising each note to the next chord tone:

It is worth noticing that the drop-2 voicing of the Maj7 chord arranges the notes as 1-5-7-3. You can form other drop voicings the same way. Drop-2, drop-3, and drop-2&4 voicings are probably the most common on the guitar.

Taking your example E-A-C#-F#, you can rotate through the inversions:

The last inversion has the last three notes arranged so that raising the bottom note one octave (an inverse drop-2 operation) gives F#-A-C#-E, a close-voiced F#min7 chord. This means that E-A-C#-F# is a drop-2 voicing of F#min7 in third inversion.

There are lots of other ways to voice 7th chords; in particular, chord voicings with doubled notes don't fit the usual way of defining drop-voicings. Voicings that drop a note from a close voicing more than one octave are also not treated by this system. Still, drop voicings are a good beginning for developing a vocabulary of chords.

Down the rabbit hole

Before looking at how to apply all of this to the guitar, anyone who is interested should look at the answer by @MichaelCurtis for a great way to visualize these and a great alternative solution to finding out if a particular chord voicing is a drop voicing.

How to apply this on the guitar

Knowing how to spell a drop voicing is one thing, but knowing how to construct it on the fretboard is another. As an example, I'll construct the drop-2 voicings of a CMaj7 chord on the fretboard. The result will be a collection of four voicings (drop-2 in root position and three inversions), some of which may look familiar, and some of which may not.

Begin by constructing a close-voiced CMaj7 (C-E-G-B) on the top four strings; this is the first chord block in the diagram above. Next, drop the second note from the top (the G on the second string) one octave, to the 10th fret of the fifth string. The second chord block in the diagram shows this chord. The fingering is not impossible, but it is a little awkward, so let's adjust by moving the B on the first string to the (now vacant) second string; this is shown in the third chord block. This is a drop-2 voicing of the CMaj7 chord, and since G is in the bass it is a CMaj7 in second inversion. The notes of this chord are G-C-E-B.

You can't construct these every time you need them, so learn the shapes and learn where the root, third, fifth, and seventh are in each of the inversions. Learn how these shapes change when played on the top four strings or on the bottom four strings. Learn how to transform the Maj7 voicing into other chord types: 7, min7, etc.

Instead of starting from a close voicing in root position to get a drop voicing and then moving the notes of that voicing around to find the inversions, you can start from the inversions of a close voicing. That is, you can start by constructing a close-voiced CMaj7 as we did above, then finding its inversions by moving the bottom notes up an octave. Once you have each of the inversions, drop the necessary notes to get all of the drop voicings. For CMaj7, starting with a close-voiced C-E-G-B, you have the inversions: E-G-B-C, G-B-C-E, and B-C-E-G. These respectively become the drop-2 voicings: B-E-G-C, C-G-B-E, and E-B-C-G. These are the same voicings that we had before.

This alternative method is a great way to think about drop voicings, but not a great way to work with them on the guitar. The fundamental issue is that close voiced chords and their inversions are difficult to play on guitar. For me, it is easier to work out fingerings using the first method, but it is good to know about both.

This is just an extension of @DavidBowlings answer - which really explains the drop voicing completely - with some visual charts.

I had a little confusion mentally switching between the "standard" inversion of the un-dropped chord and the inversion of the dropped chord. I made a chart to get that sorted out and I thought I would share it here. Please let me know if I've made any mistakes and I will update accordingly.

An interesting thing is all three common drop voicings - drop 2, drop 3, and drop 2 & 4 - follow the same pattern of "voices" and "skips" on a repeating 8 position pattern where V means voice and - means skip a voice: V-VV-V--. These are the permutations of that patterns... 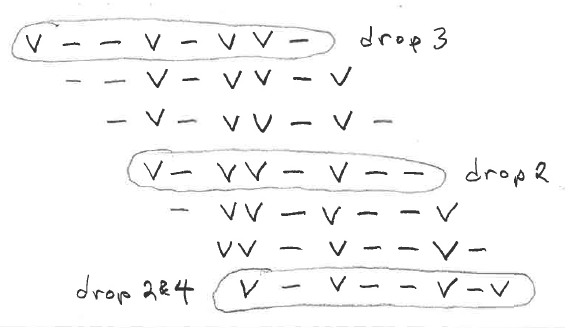 The pattern of voice skips seems to be the defining characteristic of each drop voicing. I was surprised to see that all three drop types are just permutations of one pattern.

If we stay with the Cmaj7 example, the various inversions/positions of the drop chords are... 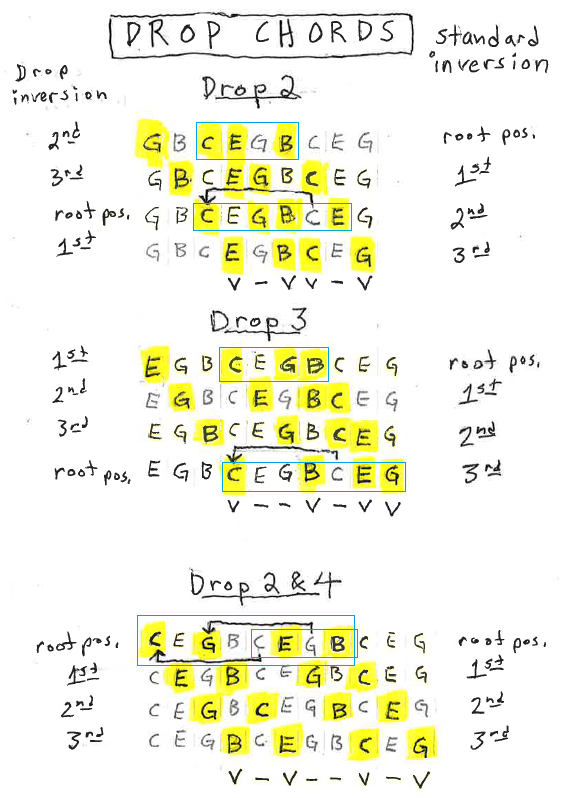 Personally, the timing of this question was perfect! Just the day before I was trying to come up with 'standard' forms for open position chords. Of course there is only one closed position (with inversions), but there can be many open positions. I was looking for a systematic approach to open voicings/positions.

These drop/open voicings can be overwhelming at first, but if my V-VV-V-- is correct, there is a single pattern which unifies everything.

You can create smooth voice leading with one drop type and alternating inversions...

Not the answer you're looking for? Browse other questions tagged guitar terminology chord-voicings or ask your own question.

3
How do inversions of extended chords work?
2
Is there a naming convention for open chords?

1
Is there a name for this type ascending inversions of a repeated chord?
2
Dropping the 5th degree and counting a C♯Dom7
0
How would you calculate the name of this C/A# 7th chord?
4
Do we hear bass/baritone solo melody lines as being implicitly “on top of” the accompaniment, for harmonic purposes
4
Improvising over quartal voicings
7
What does “function” actually mean in music?
3
What does the author mean in these examples of chorales & harmony?
2
Do descending drop chord voicings in the blues work?
5
Is there a reason an arranger/composer will choose a particular chord voicing when charting chords for guitar on a particular song?
2
Dictionary for Reverse Chord Lookup