I would like to know a bit more about how the valves of trumpets (and other brass instruments) work than is here: Trumpet at Wikipedia.

I am ignoring issues such as it being a transposing instrument. I only interested in the relative pitches of the notes and not the absolute pitches.

The fundamental is not usually used so the first few harmonics are: C4, G4, C5, E5, G5, *, and C6. (I have skipped the 7th harmonic, its use might become another question).

There are valves to drop the pitch by 2, 1, or 3 semitones. So, I can use these to fill in the gaps between the harmonics. The biggest gap is between C4 and G4. Filling this gaps requires 7 of the 8 conceivable fingerings. Only valve 3 by itself seems to be unused.

Now, let's do some maths. The full length is 1.480m. So, to drop it by a well tempered semitone, this needs to be extended to 1.568m. So, you might expect valve 2 to add 88mm of tube. To drop by 2 semitones, the length needs to become 1.661m so an extra 181mm (note more twice that needed for the semitone). Now comes the problem: to drop by 3 semitones requires the length to be 1.760m so an extra 280mm which is more than the sum of the lengths added by the previous valves. My calculation is that adding 88mm and 181mm only drops the pitch by 2.89 semitones.

There is the further problem that the gap between the 2nd and 3rd harmonics will be a just tempered 5th rather than a well tempered one. I'll ignore that as well for the moment.

Note: I have played a variety of woodwind instruments but no brass. My knowledge of the trumpet is primarily theoretical through reading.

Yes, the additional length required for each semitone drop is proportional to the original length. If adding valve 2 to an 'open' note is sufficient to drop a semitone, it will not be enough to drop a note that is already using valves 1 and 3. Or even just valve 1.

This is addressed in several ways. Valves 1 & 2 theoretically add the same length of tubing as valve 3 alone. In practice, valve 3 is adjusted to add more than that. This helps correct many multi-valve notes.

The next level of correction is that all but the cheapest trumpets have finger-operated slides on valve 3 and often valve 1. In this picture we see the ring that is directly connected to the 3rd valve slide, the trigger mechanism on the 1st. The player adjusts these while playing, as required for a note that would otherwise be out of tune. 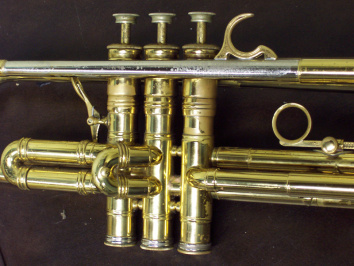 On the larger brass instruments, Euphonium, Tuba etc. where the additional tubing lengths required are substantial, there are complex systems of 'compensating valves' which do indeed contrive that 1 and 2 combined add more length than 1 and 2 seperately. Look at the diagrams in this page:

You will also sometimes see tuba players 'playing the slides' - manually adjusting a tuning slide for a particularly problematic note.

A 'Full double and compensating' French Horn is something to behold! Here's a TRIPLE horn! (Actually, it appears to be a double plus an extension. There are two sets of tuning slides, not three.) 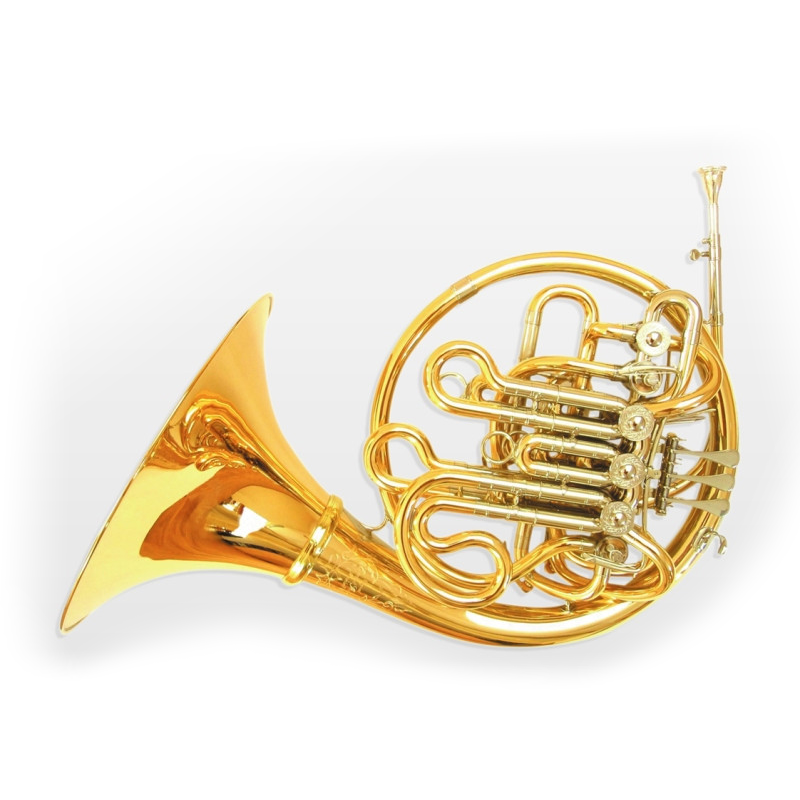 A good brass player can use any combination of valves. Mind - what I always tell them: the pitch is in your ear!

You may certainly know that trumpets (not all of them) have a tuning slide:

Edit: As Laurence Pawne mentioned this quotation above is concerning the general tuning slide that all brass instruments possess. What I am thinking of is the trigger for compensation the length to play a well tuned D and Db (the tones of the valves 1+3 and 123 in Bb tuning)

Many trumpets have a mechanism (a spring-loaded lever or a simple ring) attached to the third valve slide.

When using all three valves at the same time the mechanism makes it possible to manually lengthen the third valve slide. As you noted, the third slide isn't long enough on its own, so unless the this mechanism used, the pitch will be too sharp.

Some trumpets have a similar mechanism on the first valve slide too. The middle valve is too short to need a mechanism like this.

Many larger instruments like tubas feature compensated valves, where the valves have extra ports, which means the tubing is automatically lengthened when using the third valve. Of course uncompensated tubas exist too, but to play one in tune you have to manually extend tuning slides as you play.

Not the answer you're looking for? Browse other questions tagged trumpet valves or ask your own question.