In Ableton Live 10, how can I configure a clip to launch only on the last bar of a 4 bar sequence, regardless of when it is triggered?

I have a piece of music that I commissioned that is basically a jingle for a YouTube channel. The composer has made me a background loop followed by an outro, which are contained in a single audio file (wav format). I wanted to bring all this into Ableton so I can play the loop for an arbitrarily long time (rather than the fixed time that has been supplied) and trigger the outro by hitting a pad on my controller.

I have imported this clip and isolated and looped just 4 bars of the original clip, so I can just hit a pad on my controller and set that playing as long as I like in a never ending loop. So far so good.

I have also isolated the outro part into a clip consisting of 3 bars of the loop, followed by the crescendo bar, then outro, 15 bars total.

Now what I want to achieve is that I can trigger my outro any time during bars 1-3 of my loop, so that the crescendo begins playing in bar 4 and then continues into the outro, which plays out to the end and stops.

I think I need to use Legato mode and it sort of nearly works, but because my outro is 16 bars long, when I trigger it, it often starts playing somewhere in the middle instead of at the beginning.

How could I arrange things so that my outro clip always starts playing at bar 4 of my background loop, no matter when I trigger it?

I probably haven't worded this very clearly as I'm quite new to Ableton and music production in general. I hope you'll bear with me...

I apologize in advance, but this is a colvoluted hack. I hope there's an easier way, but it appears that it's not possible to automatically trigger a fill at the end of a currently playing 4-bar round, without the user being able to time the transition with at least one-bar accuracy. This is because the Follow Action Time is relative to the time position where the clip happened to start playing, which in this case is random, because it's triggered with Legato Mode at any time during the first three bars. So any possible Follow Action jump would also happen at a random bar offset. Quantizing the clip start to a bar boundary will only quantize the random offset to 1-bar granularity. Quantizing to 4 bars might help, but it would extend the waiting time to at least 4 bars, and even 8 bars in the worst case.

Here's a rough description of the MIDI loopback session control hack. There are more detailed tutorials available on the web, and you'll most probably have to read them to troubleshoot the contraption anyway. 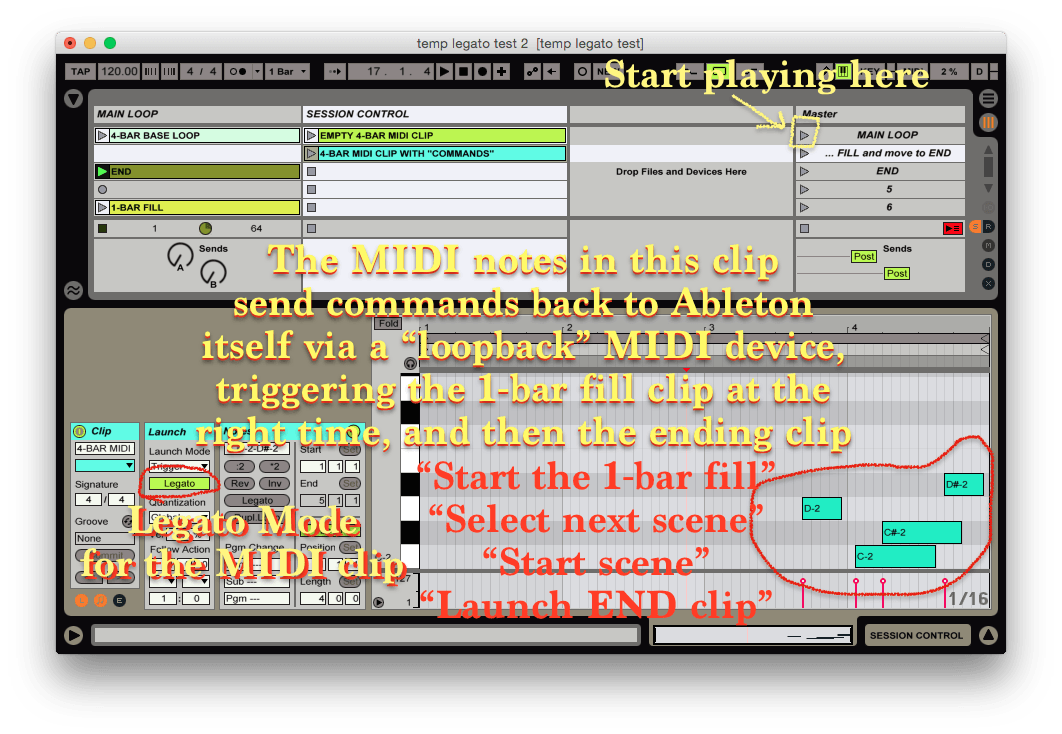 There's more than one way to set it up. How to do the clip launches, scene start/stop, etc. You have to play with it a while to figure out what's possible. For some reason, I couldn't get the END clip to trigger correctly as part of the scene, so I added an extra MIDI note to explicitly trigger that clip separately.

The clearest and most explicit way to program this might be using Python and a custom remote control setup. The clip launch / legato / follow action thing is complicated enough by itself, and using the scene trigger loopback control thingies adds more stuff to the mess. :)

A solution that is not limited to Ableton Live, but should work in all software, would be to set up the parts like this:

where A and B are the loop start and end point, and S is the playback start point. When you press PLAY, the playback will start with bar 2 (which is bar 1 of the background music) and then loop through the 4 bars of the background music. Then, whenever you want to move to the outro, you switch off the loop function, and playback will move beyond point B into the alternative version of the fourth bar at the earliest point, and then play the outro.

Not the answer you're looking for? Browse other questions tagged ableton-live or ask your own question.

0
I love with Ableton Live as a composition tool (session views). But I can only use Logic Pro X for studio mixes. What can I do?
2
How can I transfer GarageBand software instruments or find equivalents in Ableton Live?
5
Ableton Live: How to control a parameter using the amplitude of another track?
2
How can I map a sequence of midi notes to a scale in Ableton Live
3
How to find out the pitch of a melody in Ableton live 10?