Are there physical dangers to preparing a prepared piano?

A prepared piano is a piano that has various objects applied directly onto (and perhaps into) the strings. 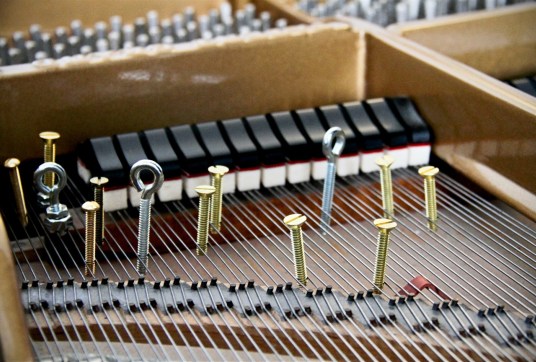 The concept is most famous from John Cage, and his Sonata No. V is a common favorite; it's a one-man tribal gamelan!

I'm wondering if there are any dangers to preparing a prepared piano. I'm specifically curious about inserting screws, and whether doing so might affect the integrity of the strings, resulting in possible damage to the piano and to the preparer/performer.

I've never heard of a string breaking or a piano being damaged (i.e. actively needing to be repaired) after being prepared. That said, your question is the specific reason why many institutions / organizations do not allow their pianos to be prepared: they are afraid of the possibility of damage.

This is similar to a violinist refusing to play col legno with their $20,000 bow. Often times they'll whip out a cheap "beater" bow that they don't care about. Similarly with pianos, many institutions have less-wonderful pianos that they won't mind if they get damaged.

Will using screws 1 time to prepare the piano hurt the strings? Not likely. But doing it repeatedly, in the same locations, for long periods of time? I think about the most damage one would see would be that the strings wear out faster. At around $1000 to replace, not everybody can afford new strings.

That said, it also depends on what you use. Objects like pieces of paper, plastic straws, and paper or wood are all less harmful to the strings as their material is softer. Any object whose material matches or exceeds the strings in hardness will damage the strings (this same principle is used in percussion playing).

With screws specifically I think it would have most to do with thickness and with how pronounced the grooves are. A machine screw will affect the piano differently than a wood screw. Whatever you use, I fail to see how a performer might get injured (unless they're playing a piece where they frequently move from playing outside to inside the piano, violently and loudly).

Many performers shy away from this type of music because:

Yes, you could potentially damage the piano. The likelihood of you damaging the piano depends on the specifics of the preparation. Even if the actual likelihood of damage is low, you must also consider the piano owner's perception of the likelihood of damage. If the piano is not yours, always ask the owner for permission before preparing. If you're at an academic institution, they might have a piano designated for this purpose, so talk to someone in the department.

It's not just a matter of what you're putting on the string; how you do it is just as important. For example, in your photo showing bolts between the strings, notice how they are held quite tightly by the strings? You can tell because they are actually displacing the strings. If this is what you want to do, don't screw the bolts in or use force to push them in! The correct way to do this is to use a wedge to spread the strings first, then insert the bolt, then remove the wedge. I think the common sense thing to do would be to have the strings resting in the groove between threads, so select your materials accordingly.

If the piano's owner -- whether you or someone else -- is worried about damage, there might be a less risky alternative to achieve the same or similar effect. Focus on the sound you want and be creative.

Cage and others were musical anarchists but clearly knew very little about engineering and machining. Instead of screws, you might want to develop small metal spacers with smooth half-cylinders to pick up the strings, and an adjustable "mast" to give some sort of vibratory resonance factor.
Q&D drawing: 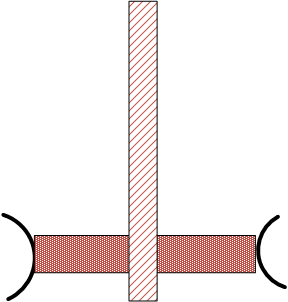 Not the answer you're looking for? Browse other questions tagged piano modern-music or ask your own question.

9
Are there any compositions for piano that are impossible to play without a full-range keyboard?
3
Glass beads for prepared piano
5
Why are there 7 sharps when there are only 5 black keys on a piano?
1
Are there existing paganini no. 1 caprices for piano?
13
Are there any tricks to pushing a grand piano?
1
Are there any advantages of piano layout to isomorphic layout?
4
Can Reich's Piano Phase be emulated with a delay unit?
0
Is there a piano method that uses movable Do when the students are learning tunes/pieces?