What is the chord symbol for the marked chord? [closed]

Ask Question
Asked 8 months ago
Active 8 months ago
Viewed 113 times
0
Closed. This question is off-topic. It is not currently accepting answers. 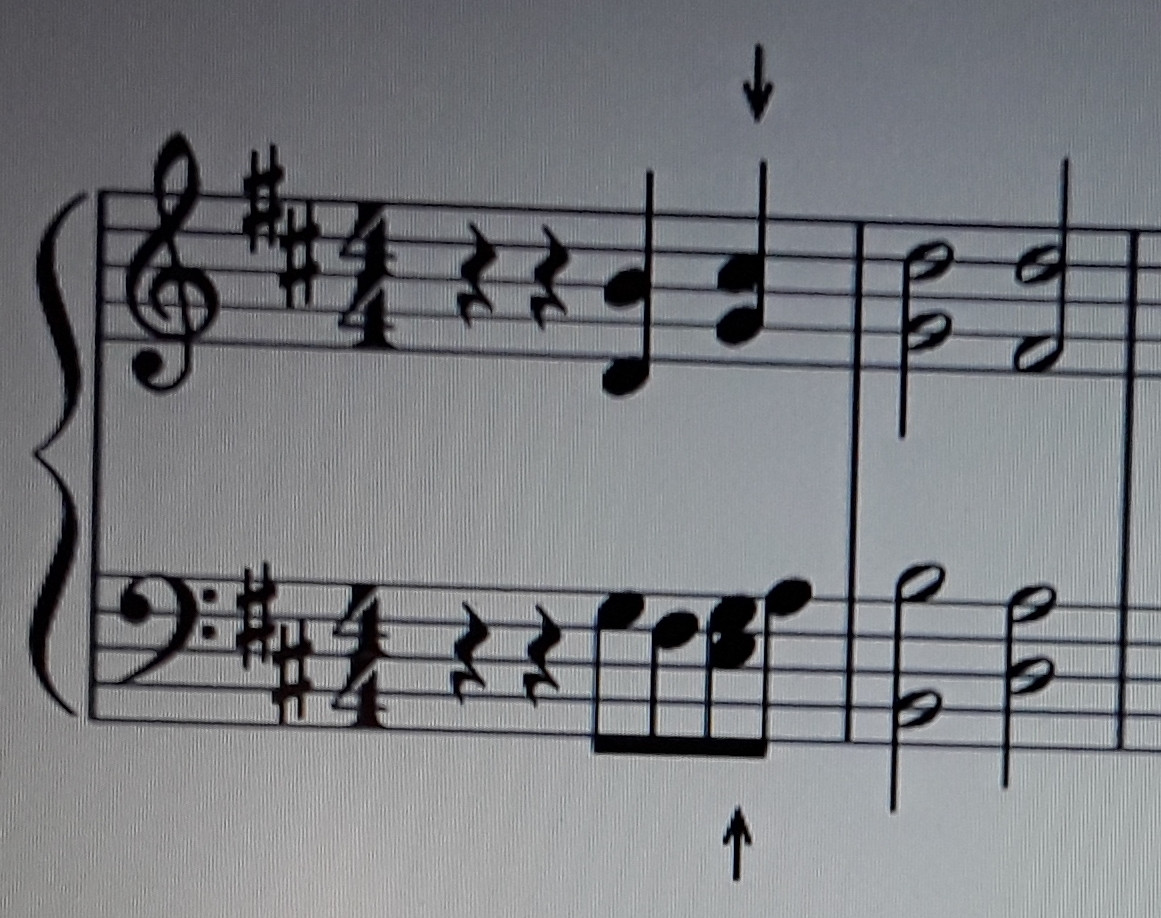 The image is a part of a short piece. It is in D major. I am not sure of the chord symbol for the chord marked with an arrow (4th crotchet beat bar 1). I am confused between the chord being either C#°/E, or A^7/E. Can anyone help me out on this?

This is the inversion of the VII degree (c#eg) of D. A is passing note to B. Analyzing the short 8th as V7 is not wrong but in respect to the horizontal line and the following subdominant I would ignore to analyze hear a dominant as in my mind the harmonical function gets violated by the theory of functional harmonics.

The goal of a task like this isn‘t to give the only correct answer as there isn‘t one. The purpose is to sharpen your mind and you ear and to be able to discuss this situation. I would focus on the G/B chord in the next bar that I hear as a great and strong suspension of the tonic that is resolved only in the second half of the bar.

(If the D chord came right after the A7/E chord I would discuss this passage as VII-V7-I).

I think the A7/E looks right. (Given the key the dominant seems most likely)

Notewise, we've got (bottom to top) E, G, G, and a C♯. Strictly speaking, that makes a C♯°/E chord. However, diminished chords are tricky They're symmetrical (or at least their 7th chord versions are), and often the same voicing of notes can represent many different chords in different contexts. Other answers have noted that these notes are all part of the V7 chord, so an incomplete voicing of A7 seems likely, especially since that A is played right after it (are you certain that A isn't part of the chord?) and that would make the chord progression (simplified) IV-V-IV-I. I think this is likely how audiences would hear it.

Another interpretation could be that the chord is G°, since the next chord is a G major triad.

7
What is the name of the symbol like a combination of a mordent and f?
11
What is the proper name of the dash symbol over a note and how to play it
6
Open/Close Position Chords: What I am missing?
3
What tonic chords follow a dominant seventh chord?
4
Is this a form of cadence?
13
What is the origin of the triangle symbol for maj7 chords?
2
How can I say that a chord lasts for a period of time related to the rhythm of a song?
16
Chord stretched across treble clef and bass clef
3
Suspensions in 'The Long and Winding Road'?