I have an idea of what suspension chords are (in theory). However, I have a problem in labeling the chords correctly. Could anyone explain with an example on how to correctly label suspension chords using chord symbols for the piano? (Eg. CsusF)

Generally a sus chord loses its 3rd note in favour of either a 2nd or a 4th. So it will be labelled sus2 or sus4.

Occasionally I come across Csus. What the heck is that suppused to mean? Answer is sometimes in the dots, if it's a piano work, but in amongst guitar chords could be either!

Labelling for a piano? As above will do the trick, as if that's all the player is told, it's enough information for him to play the 3 approriate notes wherever he feels is best.

Be clear which system of chord naming you are in.

There's the purely descriptive one. C(sus4) is C,F,G. C triad with the 3rd replaced by the 4th. A simple Csus will be assumed to be this. C(sus2) is C,D,G. The 3rd is replaced by the 2nd. There's also C(add2) and C(add9) which is C,D,E,G or C,E,G,D. the 2nd (9th) is ADDED to the triad. As long as we're being descriptive rather than analytical, it's useful to distinguish the two, though C(add2) will send some people into fits of rage :-)

Then there's the analytical way. I, II, III instead of letter names. It tries to describe what a chord DOES rather than simply what it IS. And, to be honest, it's a can of worms. Luckily, I don't think this is the system you're asking about. Stick to the descriptions, where D means D,F#,A whatever key you're in.

Wiki gives a quite clear answer:

A suspended chord (or sus chord) is a musical chord in which the (major or minor) third is omitted, replaced usually with either a perfect fourth or a major second although the fourth is far more common.

A jazz sus chord or dominant 9sus4 chord is a seventh chord on the fifth scale degree of the key with a suspended fourth and an added ninth. Functionally, it can be written as V9sus4 or V7sus9.

This is a case where I think music notation especially makes the idea a lot easier to understand. 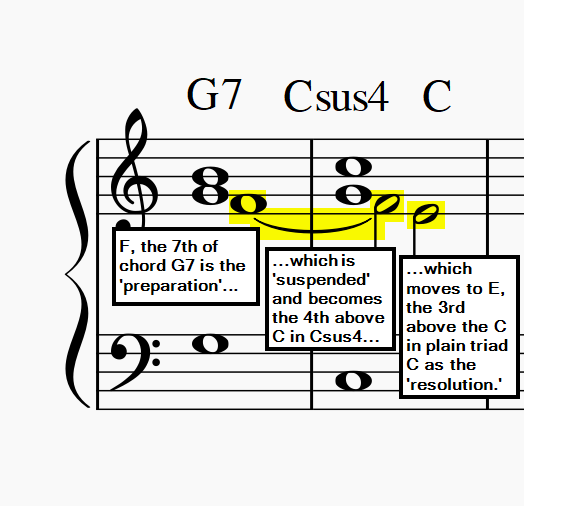 The three stage event is essential to understanding why the chord symbol sus is used.

It may seem like technical nit-picking, but a suspension is not about the omission of the 3rd in Csus4 but rather it's about holding the tone from the previous chord, holding that tone is the actual suspension.

I only bring that up to explain the origin of the the sus symbol. The reality is in jazz and pop music the sus label is used all the time for things that aren't necessarily suspensions!

In jazz and pop if a tone is added to a chord a perfect 4th about the chord's root, it will get the label sus4 regardless is there is an actual suspension.

Some people are discerning enough to say that if the sus4 label is used the 3rd of the chord should not be present. That would reflect the traditional counterpoint origin.

Also, there is a distinction between a sus4 chord and an 11 chord. Let's use a chord root of G for an example. If the tones were simply G C D if would be labelled with sus4 with the C being a 4th above the root. But, if the tones extended above the root by thirds like G B D F... C, then the C is considered an 11th above the root. As a super-general rule of thumb, if the chord has a seventh and the 4th/11th, consider the tone an 11th.

Back to our case of sus4 chord that aren't actually suspensions. Consider this example...

The circled F is a 4th above the chord root C. But notice that F is not being held from the previous chord. Nothing is being suspended in this case. The proper term for that kind of non-chord tone is an appoggiatura. I don't know why there isn't a symbol like Capp4, but there isn't. For lack of a proper symbol the sus4 is used.

So, in jazz and pop usage, sus4 is applied when the chord has a 4th above the root instead of a 3rd even when the previous and subsequent chord don't fulfill the actual definition of a suspension.

17
How to memorize seventh chords and inversions on piano?
0
Name of unusual chords in basic songs
2
chords, chord theory, and bass lines
0
Labeling Broken vs Block Chords
1
Chords symbol and playing
4
How to properly use ChordRootNamer in lilypond
5
Determining the seventh chords of a key
14
When, if ever, are arpeggiated six-four chords really “real”?
0
Labeling half-diminished seventh chords - [X]m7♭5 or [Y]m6?