How should I write a tutti chord?

Somebody commented on my Pathetique Sonata orchestration that it is all wrong and how it is wrong. Here I will focus on the part of the comment related to tutti chords.

Here is the link to my orchestration:

And here is the full comment with what is relevant to the question put in bold text:

Very unbalanced and unidiomatic orchestration. There's a lot to go through here, but let's start with the first chord. The woodwind writing is horrible. The flute is in it's lower mid-register and will not be heard over the massive forte of the other instruments. The oboe is way to low in it's register to succesfully play the C in piano. It is very unclear how many of each instrument you have so that has to be clearly written out (my concern is primarily the clarinets and horns). The chord is voiced very badly with very thick harmony at the bottom and rather sparse higher up. Try to write tutti chords according to the harmonic series.

I don't understand at all why you want to double the melody line with the flute. And you don't use the piccolo as it's own instrument but rather as an extension of the flutes register. I also don't understand the need for bass clarinet, contrabassoon and alto trombone. You can do just fine without them.

Bar 11 you write the eighth note tremolo from the original score and write super fast double-tounge in the contrabassoon. This is super unidiomatic as well as tiring and on the border of unplayability for a longer period of time.

These are just a few things to think about. Balance is important too, remember that. I'm also working on orchestrating the Pathetique right now (not on musescore), as well as all the other Beethoven sonatas. It's a very big project and it takes time but it is definitely worth it!

And here are my thoughts on it again, relevant to the question:

The woodwind writing is horrible. The flute is in it's lower mid-register and will not be heard over the massive forte of the other instruments.

The chord is voiced very badly with very thick harmony at the bottom and rather sparse higher up. Try to write tutti chords according to the harmonic series.

Are you just saying that because I have 3 bass woodwinds on top of the cellos and double basses playing a bass role? Without using brass instruments or omitting the bass woodwinds, there is nothing really I can do about the sparse harmony above. And if I write according to the harmonic series in every instrument, the flute would be like what 2 octaves up from where it is now? Given that it is already in the second octave, I might as well be writing the flute part in the piccolo staff if I obey the harmonic series. And I was told that the piccolo is unfit for the Grave section and that the more mellow flute would be a better high woodwind. Also you can see me using the harmonic series if you look specifically at the cellos and double basses

So how should I write this tutti chord? The comment about the harmonic series and the woodwind writing(specifically the flute and the forte dynamic) all has to do with the beginning C minor chord.

Here is how it is written currently: 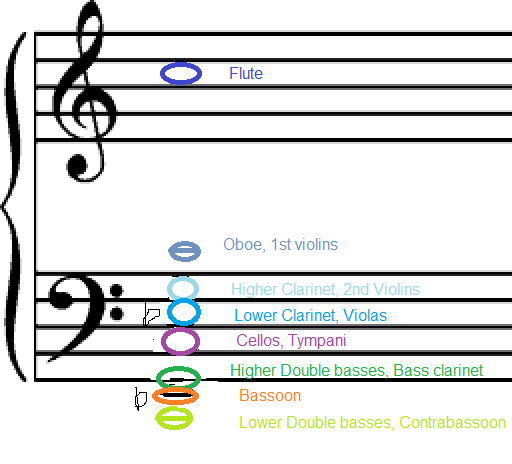 Original piano chord + tonic an octave higher in the flute

Here is how it would be written if I obeyed the harmonic series: 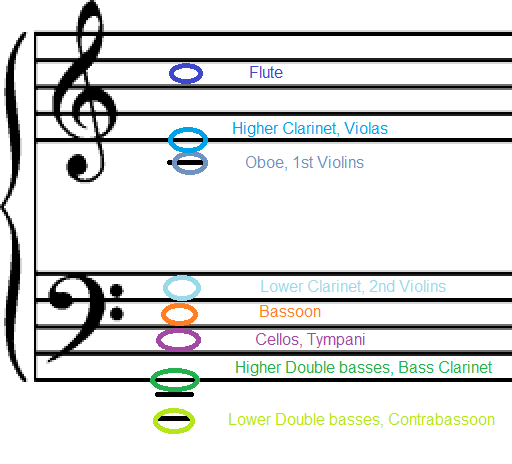 Well, okay, number of octaves doesn't differ but if I obey the harmonic series, the bassoon and the previously lower clarinet will be an octave higher, and the violas will be higher than the 1st violins. Also, I have heard that you can't omit the fifth in a chord. This would tempt me into writing 2 notes for oboe, but then the melodic smoothness goes away unless I write everything in the oboe staff a fifth higher.

So, are my current tutti chords written wrongly? Because I don't see many differences between the current way my tutti chords are written and the harmonic series. By the way, all the pitches shown are in concert pitch.

Briefly: low notes are spaced farther apart. Look at any piano or orchestral score, from Mozart to Mahler. If there's a "four-note piano chord" extending below the bass clef, it's for exceptional color -- Liszt being deliberately muddy for eight bars; Beethoven hammering away to remind us that the piano is a percussion instrument, emphasizing rhythm over pitch.

Play something simple and familiar on the piano, and then try it two octaves lower.

I believe Nikolai Rimsy-Korsakov had something to say to the effect of generally following the harmonic series in chord voicings in a book of his I read from the library, Principles of Orchestration, which I recommend highly, as it's pretty comprehensive, even if it might not be very current in its counselings.

It's a good arranging principle regardless of the style of music, but especially for powerful tutti sections, this general guideline can help to balance out the sound as well as make the chord sound full (the idea being that the more your chord follows the harmonic series, the more likely the audience will hear it as one entity, or something like that, anyway).

Note that the voicing below should have flats in front of every E note to make it C minor. Also, the colors are according to the second diagram, the one you said was resembling the harmonic series.

C3: Bass Clarinet and Double Bass on the octave over the C. I don't think putting that minor 3rd in the bass (C2-E♭2) is a great idea, just because that doesn't leave much room for the voicing to get denser in the upper register (you have 8 voices there). Also, more importantly, the minor third might come out muddy in the lower register, but an octave's never going to sound muddy (bass instruments play a lot of octaves, and that's one reason why).

G3: Timpani and cellos a fifth above that. Now we're getting narrower, and that note (G3)'s still within the cello and timpani range. If you want, I might double the timpani with the higher basses and bass clarinet to get the timpanis into their lower register, but I don't see a huge problem with leaving the timpanis on G3. Wouldn't want them on G2, though. Mud.

C4: Bassons play the only real logical choice. Notice that so far our chord is a direct copy of the harmonic series on C2? It doesn't have to be that way, but that'll surely help the audience hear it as one big sound.

E♭4: Lower Clarinet and Second Violins make sense on E♭4. You had them on G3. Bad Idea. For starters, G3 is the lowest any violin can play without subharmonics, and that means they're playing an open string. Maybe you want that sound, maybe you don't, but generally it's a good idea to keep the violins in more of the middle of their range, just for timbral purposes. E♭4 is a note that gives the violin players a much better shot at controlling their own sound and balancing with the rest of the orchestra. Not sure about clarinet, but I know clarinets can do an E♭4 for sure.

G4: First Violins and Oboe. Again, putting the 1st violins on their G string with your C4 is just not going to sound very nice. You don't want the violins on the 1st string very often. Again, it's not forbidden, but I think G4 is much better. Plus, we're retaining a harmonic series-like voicing, which was my main concern anyway.

C5: Higher Clarinet and High Violins. Why did you write the violas higher than the violins? If you want, the violas should be below the violins, probably on C4 with the Bassoons. Anyway, we deviated a little from the formula, but no biggie. I wouldn't start adding in notes like B♭4 unless that was a sound that I knew I wanted, but that's an option if you want to arrange other chords.

E♭5: Flute. Sounds alright. For a little more color, D5 could work, but that alters the harmony. Don't put the flutes a whole octave above the next highest voice. That spaces out the chord too much, in my opinion. C6 from the flutes is going to sound like a different note instead of blending into the chord.

To wrap it up, the biggest thing is that you should in this situation voice the chord in a pyramidal format: wide base, narrow top. And of course, play my suggestion against what you wrote. See which one you want to use. That's the whole point, anyway: If you want the sound you made, use that, but if you don't, it's great to know how to make other sounds, and this is a pretty useful voicing style to know how to use.

That, and unless you have a reason, don't put the violas over the violins. :)

Regarding the claim that you should write a tutti chord according to the harmonic series, in fact if you search "low interval limits", you'll see that writing intervals too low would lead to some consequences. Your "harmony" would become rather percussive and muddy. You'll easily find there's certain limits for each interval (except for the octave), those "limits" may depend on the source, but they won't be too far off from each other. When you try writing tutti chords that obeys the low interval limits, you'll find yourself naturally writing according to the harmonic series. It might not be exactly the same, but it would be pretty similar.

Interestingly, doubling the violin melody line with the flute an octave above is actually common practice. The flute blends into the texture and disappears, especially in louder passages, but nevertheless contributes to the overall tone quality. Although, it's not advisable to just use the flutes that way throughout an orchestral piece or arrangement.

Not the answer you're looking for? Browse other questions tagged harmonics orchestration chord-voicings or ask your own question.

13
How does the harmonic series affect consonance?
2
Instrumentation of the Rite of Spring
0
Stuck orchestrating the melody of a Beethoven sonata
2
Should I raise this chord up an octave?
2
Orchestration question: Should I change which woodwinds get which lines?
2
How am I supposed to orchestrate a D7 when the chordal seventh is emphasized?
45
Does the difference in harmonic series between instruments have a significant effect on the consonance of the sound?
1
Do I need to worry about Tympani glissando here?
5
How would one go about composing a Tintinnabuli piece?