How to write a 12-bar blues melody

I'm learning to write a 12-bar blues for a music theory class, and I'm a little confused about one point. I understand that the harmony is made of certain typical chord progressions (e.g. I-I-I-I, IV-IV-I-I, V-IV-I-I), but for the melody am I allowed to write anything as long as it's in the key of the song and fits well with each chord? Or am I supposed to ignore the chords being used and write whatever I want using the blues scale? Or a combination of the two?

chords melody blues
Share
Improve this question
asked May 2 '19 at 16:26

In typical melody writing the melody often uses tones that match the chords along with the careful use of non-chord tones.

But in 12-bar blues the general feeling is: any note of the blues scale can be played over any chord in the progression, so the rule of thumb above doesn't really apply to the blues.

Surely, the tonic and dominant tones will be natural resting points or central tones for the melody.

Focus on rhythm more than a traditional notion of melodic contour. Polyrhythm is very characteristic of blues, that means playing patterns of 3 melodically over a meter of 2 or 4. Syncopation is also characteristic, playing notes on the up beat.

Small segments of the blues scale often get repeated, like in C use C Bb G or Gb F Eb C. Often shorts riffs like this are play over all the chord changes without regard for the "clashing" notes. The clashing is fine with the general notion that you eventually get to some "resolution" on the tonic or dominant.

...pretty corny, maybe too ragtime for what you want to do. But it does show cross rhythm, repeating riff, clashing notes over the F chord, and a syncopation.

@Some_guy makes a good point about the "blues scale" in his answer. If you get fixated on a blues scale over chords you could get stuck into a rigid way of thinking. I sort the blues scale in my answer above. Let me offer this addition:

There is classic question of whether melody originates from scales or chords. The informed answer is both. But, this does open up the discussion to say: don't just look at the blues scale as a melodic resource. Also look at the harmonic palette.

I think the blues tonality can be described as an amalgamation of diatonic and characteristic chromaticism.

Let's cover the diatonic base first. Consider the three primary harmonies: tonic, dominant, and subdominant I V IV. We can overlap those chords...

...regardless of what anyone says about a blues scale the basic primary chords provide all the tones for a diatonic major scale. When minor sevenths are added to those chords to make the standard dominant seventh chords of 12 bar blues...

...we get the additional chromatic tones ^b3 from IV and ^b7 from I.

...applied to the primary chords we get these sets of tones...

I reviewed my copy of West End Blues and it provides a special case I think is worth mentioning. Usually the blues scale is described as having a lowered mediant, a b^3. But West End Blues has the enharmonic equivalent of that tone, a raised supertonic #^2. But importantly, the occurrences of that tone are only over the dominant chord. In C the chord would appear like this... 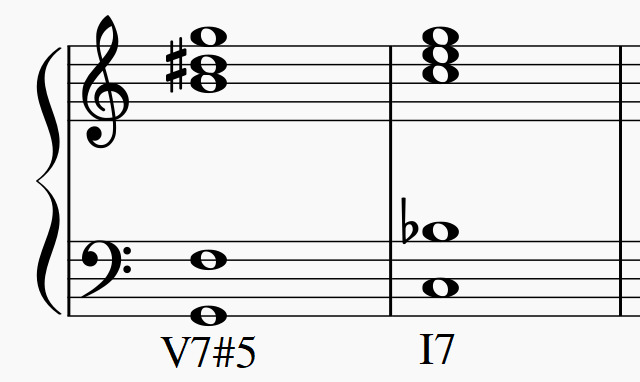 ...notice the D# instead of Eb and it resolves up to E natural.

As you can see the palette of tones in the blues isn't limited to a blues scale.

Going back to the concept of melody originating from both scales and chords we can create a melody of basic chord tones and their characteristic embellishments. You are not restricted to using only the blues scale.

It's said that a good player playing without backing can make listeners aware of where they are in a sequence, and the 12 bar sequence is no different. The better fitting notes that work over the I don't especially work best over the IV or the V.

Often I hear players 'widdling' over 12 bar blues, using the notes from the blues scale at random. It sort of works, but there are bound to be clashes where other notes fit better. Targetting root notes is a good start, and an even better ploy is to use the notes from three blues scales - those of I, IV and V, in the appropriate bars. You'll find, after looking (and listening) carefully, that a lot of those theoretically 18 notes are actually shared between the three chords, which is one reason widdling on the I blues notes sort of works.

Add to those the major blues notes (as opposed to the more commonly used minor blues notes) and you have a lot in your armoury. Just think how each note fits each chord.

The chords and the harmony are quite important for writing a blues melody:

1-2: write a motif starting from the root leaping up (minor 3rd, or 4th, 5th or dim. 5th descending the notes of the blues scale).

5-6: transpose the motif of bars 1-2 up a 4th or keep it on the same pitch by changing from major to minor: the minor third of the tonic (I) becomes the 7th of the IV

9-10: the classical blues pattern V-IV using material of the opening motif or just any repeated and transposed 1 bar motif

11-12 can contain the elements of the original phrase ending to the dominant (V) for the loop.

There are many many different ways to write a blues melody, but none of them involve "applying the blues scale"

What you really need to do is listen to a bunch of blues, and learn how to play the melodies. Then, use what you've learned to write the blues.

"The blues scale" has almost nothing to do with the blues though. It's just a sort of facsimile invented to help people who don't really know what the blues is to sort of sound like they're playing the blues.

Your use of the word "allowed to" is pretty troubling as well. That's not how writing music works, least of all writing blues music.

When writing a blues melody, you can use pretty much any note, expect I guess the flat 2nd/ And even then you could use that as a passing note. And of course most blues melodies are microtonal, so they use "notes in between the notes", like the blue 3rd and blue 5th.

For a tip though, many blues melodies focus on the flat 3 for both the I and the IV chord because it works as both a blue third on the 1, and a flat 7 for the IV. Usually when you play the third in the blues, you flatten it more on the IV than the I. You might even hear singers sing a major 3rd on the 1 chord (or just a sliiiightly flat major third), and then flatten it all the way to a minor 3rd on the IV to fill out that IV7. Then, on the V, you might move that 3 all the way down to a 2 (which is the 5 of the V)

The key fact is to hit the blue notes. At its deepest level, blues is about that. Spoonful by Howling Wolf has precisely 1 chord in the whole song, and the most prominent riff uses just 2 notes. And it's great.

You're talking about 12 bar blues not a 1 chord vamp, but you can apply lessons from 1 to the other.

I'd say don't overthink it. If you listen to a lot of 12-bar blues, you'll find that there isn't really a lot of variation in the melody. That's because melody isn't really the point of the 12-bar blues. It's supposed to be formulaic, because it's the lowest common denominator in music. Because it's so simple, anyone can write it, anyone can sing it, and anyone can play it. Don't stray too far from the formula. Choosing a good turnaround is the best place to add some differentiation.

Not the answer you're looking for? Browse other questions tagged chords melody blues or ask your own question.

7
Diatonic chords of a pentatonic vs blues scale?

7
I-IV-V blues progression
7
How to play the bridges in a standard blues progression
5
How does Gdim7 fit in C# minor?
9
Musicology of Melody
0
12 bar blues, spread rhythm: alternative to 6th chord to avoid finger stretch
4
Are there "rules" for improvising with the minor pentatonic scale over 12-bar shuffle?
4
Singing along to guitar chords (harmony)
2
Is this melody too complicated for a first variation?
1
Question from Exercsies in Melody (Percy Goetschius)
22
Making Sense of Blues Soloing; differentiating major/minor pentatonics