In popular music I often hear a chromatic descent on some minor chords where the root note of the chord descends downward. So in C major if you take the A minor chord and descend the bass note chromatically from A down to E for example you get a whole different bunch of chords there.

Are those different chords or is this just seen as A minor over a descending bassline? This is by far the most popular example but if anyone else can show me some more examples I would appreciate it. The Beatles (Something) and Queen (Bohemian Rhapsody) did this a lot and the music books rationalize these movements by naming each separate chord, but is this the best way to see this?

TL;DR depends on the song. Sometimes one is obviously better than the other, but most of the time it's somewhere in the middle and both interpretations are valid.

This is often called a "line cliché", and depending on how it's executed it can sound either like harmonic movement or just like a moving baseline with "pedal notes" in the top. It can be completely chromatic, or it can include whole steps too. It occurs in major and minor keys (C, CΔ7/B, C7/B♭, F/A, Fm(6)/A♭ is pretty common in wishy washy love ballads too haha)

Often how to notate it (or think of it) isn't really a case of "this or that" but of perspective, both things are true, but different songs lean in different directions.

Are you trying to create an effect of constant harmony with a shifting bass, or are you trying to give a sense of harmonic movement. Or from a listener's perspective, which one does it sound more like? Generally, if it sounds like everything in the song is harmonically static, with just a wandering bass, then that's probably the best way to transcribe it. If it sounds more like a "chord progression", then it's best to write it like that.

A lot of it comes down to voicing, often in more "harmonic movement" sounding implementations of the line cliché, the voicings of the rest of the band change to accomodate the harmonic movement. (so in a band, the guitar for example won't just keep playing the same chord, but play different chords in addition to the bass playing different notes. Or on a piano, both the left and the right hand will change, not just the left hand.)

So let's say we have a common minor line cliché (just one example, there are many more)

These are all ways of writing the essentially same chords. Generally a guide for me is whether it's literally only the bass that's changing, or whether there are harmonic changes throughout the range (in the "left hand" and "right" hand in piano terms, but in a whole arrangement, what are all the other instruments doing?")

Generally for me "1" implies a very rigid arrangement with only a moving bassline, whereas the 3rd one implies proper solid harmonic movement (that may include other extensions and more interesting voicings). If something is in the a "there's a bit of harmonic movement but it's only really the bass" then I'd lean towards the 2nd option; hedging my bets.

The other thing is how much does the arrangement tolerate the clashes caused by a line cliché. In the example I gave above, there were none; but when it's a pure chromatic line cliché, there's often a clash caused by that second chord. So Am, Am/G♯... for example. In fast more animated pop music (and often in pop music), you often just basically ignore it, keep playing A minor in the top and treat the ensuing weird chord as just a passing chord to the next note. On the other hand, in slower music (or in musical styles or bands with more of a focus on harmony), you'll find there will often be changes in the harmony to accompany that major 7th. E7/G♯, G♯dim, G♯+. The first two of these are very different from Am/G#, and so really need to be written.

But even in this case, there's still a middle ground there too, sometimes you don't really change the harmony (like with a G♯dim chord), you just try and avoid playing any As so there's no clash, and so you get an aug chord almost by accident. (i.e. ACE goes to G#CE). In that case I'd write it as G♯+ or G♯Aug, but honestly maybe in a pop context I'd instead write "Am/G♯"(no root) just to not scare people who don't really feel comfortable with Aug chords.

This answer could do with some refining, I'll pop back and clean it up later and maybe add some examples. Hopefully I've basically answered your question though.

I have seen the term CESH used in multiple sources: Chromatic Embellishment of Static Harmony.

There are common forms in major and minor.

In my experience these lines are used to embellish a tonic chord.

Both major and minor forms lead easily to the subdominant.

...Are those different chords or is this just seen as A minor over a descending bassline?

In classical Roman numerals I would simply label it with i and the chromatic line would be considered decorative/passing motion.

In both systems it is viewed as one chord. That is why it is regarded as static in the term CESH the single chord is not changing.

I was thinking also of this line cliché and as you say the Beatles ... I remember when I heard the first time the White double album: there are more than only one of this: While my guitar gently weeps

and other LP's: Fixing a hole, etc. all little varied.

other examples: I heard the voice of Jesus say (Edwin Hawkings)

Thanks to Some_Guy for the term Line Cliches: 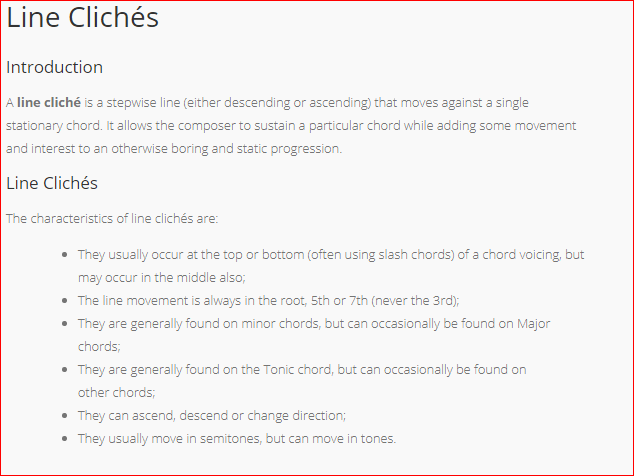 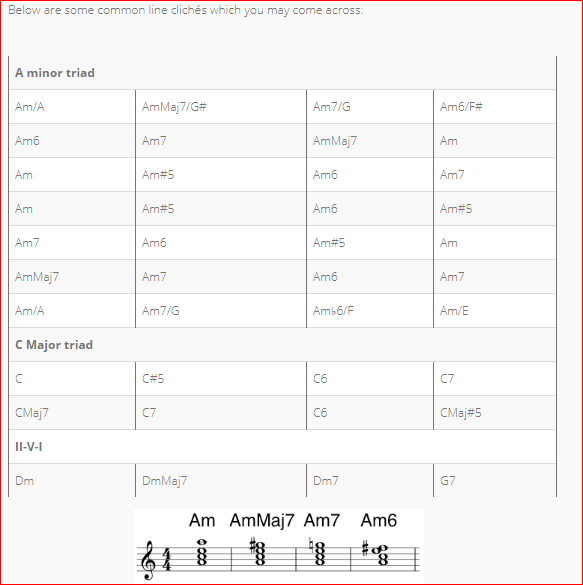 As you can see there are several different chord progressions built together with this line downstep.

There is also a piano concerto by Bach: It's the Larghetto of BWV 1055

25
What is the full list of possible chord names? Are there chords that don't have a name in chord theory?
10
How do you name chords in 20th Century Music? (Chords stacked in intervals other than 3rds)
5
Descending Minor7♭5 Introduction/Motif Questions
1
Chord progression leading using B lydian (and others)
4
How can the intro to the song "If I Fell" be analyzed?
0
Labeling half-diminished seventh chords - [X]m7♭5 or [Y]m6?
5
Using V and v chord when melody alternates between harmonic and natural minor
4
Notating "enharmonic" chords, e.g. iv7 vs bVI6
8
Is Alberti bass really a type of arpeggio?
9
What do you mean by the tonic chord feels as 'home'?