I arranged the first movement of K 545 for a string quartet and I have gotten a lot of detailed feedback on everything from the unison between the 2 violins at the beginning measures to my bass line(or lack thereof) to my use of pizzicato. It was even suggested to me to have the first chord of the development be played staccatisimo to keep the sense of a sudden change.

On the one hand, one person said that my use of pizzicato to represent the staccato eighth notes was creative. On the other hand, quite a few people, including string players have said that the change from arco to pizz and vice versa is too quick and that I should have those eighth notes be played arco. One of them even said that arco is more appropriate for Mozart's era.

There are 2 such passages in the sonata, both towards the end of their respective repeats where there are staccato eighth notes which thus far I have represented with pizzicato. Here they are:

Staccato in the exposition 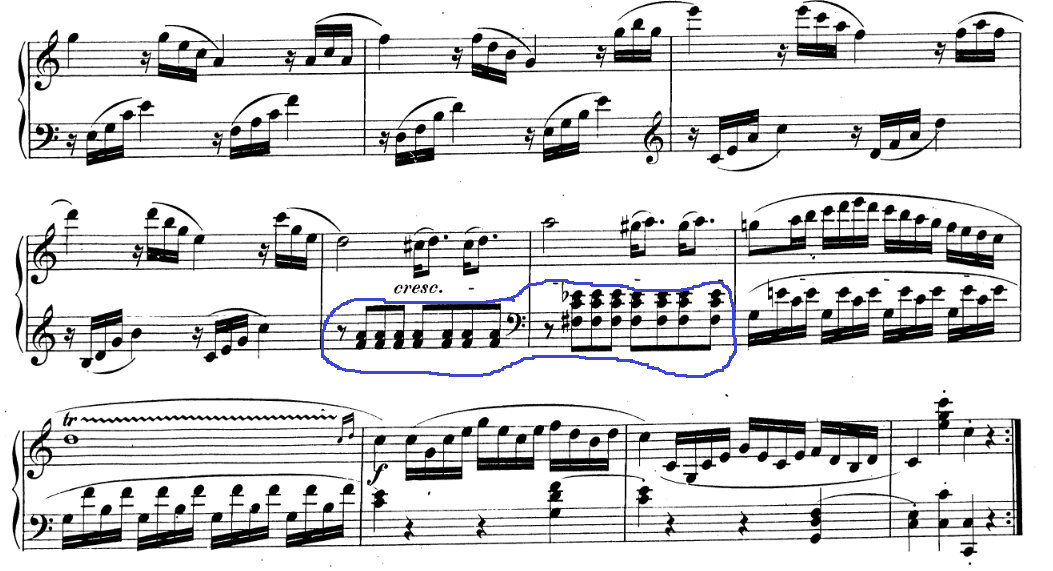 Staccato in the recapitulation

Now here is my reasoning behind using pizzicato to represent those staccato eighth notes. Staccato bowing has quite a sustain. In contrast, pizzicato has more of a bouncy character, like staccato on the piano does. Thus, if the passage in the original piano score is staccato, especially if it is a fast staccato like it is in K 545, then it makes sense to me to have that same passage pizzicato in a string quartet arrangement.

But several people have told me that while technically possible, such a quick change from pizzicato to arco as I have in my arrangement of the sonata right now will be sloppy if an actual string quartet plays it. One of the people who gave me feedback said that back in Mozart's era, there would be no markings on the eighth notes and the players would have understood to use a light "bouncy" bowing, what modern composers would mark as staccato.

By the way, here is a link to my arrangement if you want to hear it:

Personally, I would add the staccato markings if you want the notes separated. Good string players will probably interpret them the way you intend, but it is better to be safe and remove all doubt.

The tonal difference between bowed staccato and pizzacato is huge to say the least. Us string players can produce extremely short bowed staccato (even before switching to spiccato or ricochet), so don't mark as pizz unless you want that alternate sound.

1
Legato and staccato in Mozart?
3
Can violins change notes in the middle of a double stop?
14
How to transcribe an arpeggiated 4-note chord to be playable on a violin?
2
Arranging K 545 for a string quartet, how to write the harmony part
3
4th octave Eb in Chopin, should I trust that the flutist will get the note?
1
Is it possible to stick too closely to Mozart in an arrangement?
8
How to approach the collé bowstroke?
6
Double staccato?