Ask Question
Asked 8 months ago
Active 8 months ago
Viewed 247 times
3
Closed. This question is off-topic. It is not currently accepting answers.

In one of Bach's works the score forms a cross on the page.

I think it's a major choral work. As far as I remember, the crucifixion is being referenced in the words at the same time as the the notes on the page form a cross.

Can anyone tell me the name of the work and whereabouts this happens?

I can see I was very remiss. I didn't mention the orientation of the cross - humble apologies.

I meant a cross in the form of an X. There are at least four staves and the parts cross over.

Very dim of me not to mention that.

The cross motif is also to find in the BACH motif:

A cross motive (chiasmus) is a popular musical symbol, especially in the baroque era. It consists of four notes that follow each other in such a way that you get a cross when you connect the outside and inside tones.

The most famous cross motif is B-A-C-H, the setting of the name of Johann Sebastian Bach. Bach himself set this episode many times in fugues, chorales and other works. This is especially noteworthy, since B-A-C-H are very small steps (spacing of 3 semitones from A to C), which is not harmonically easy to compose.

But what you are asking for is:

In the Passion of St. Matthew

How the unruly rage of the masses of the people increases, is represented by the increase of crosses as a sign, up to C sharp major, which has seven crosses. In strict polyphony of a joint exposition, the individual voices, which ascend one after the other from the bass to the soprano, demand "as it were formulated lawfully, the merciless harshness of the maximum punishment" (quote from Platen). [76] The effect is underlined by the cross motive in the melody, the syncopation and the diminished fifths. 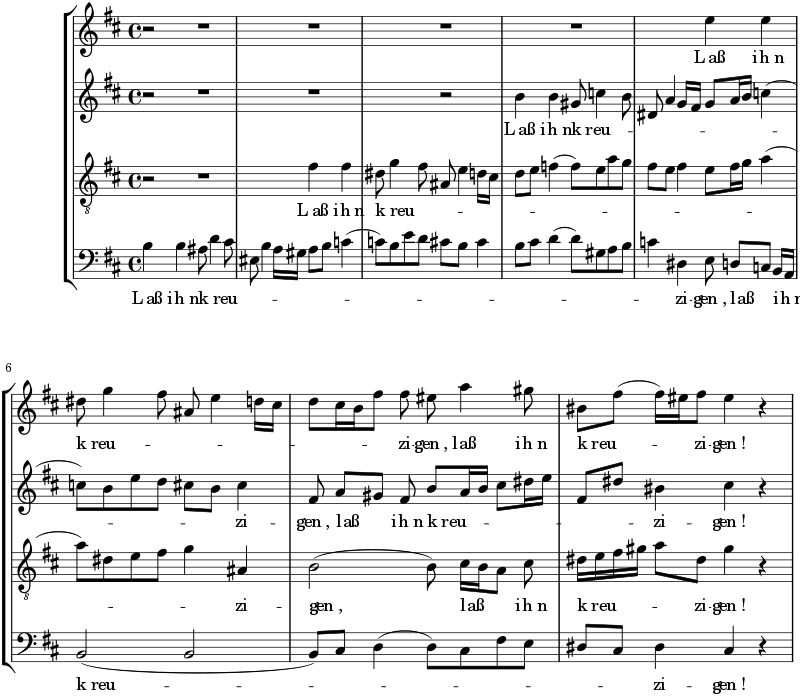 Symbols play a vital role in Bach's music, since his work is a masterpiece of synthesis of artistic trends reaching far into the Middle Ages (cf. Geiringer, 1956). Bach uses different kinds of symbolism, one of the most frequent being pictorialism, a technique employed to conjure up, through musical means. visual impressions associated with the words set to music. An example of the typical Baroque form of "sound-painting" can be found in the Gloria of Bach's Magnificat. At the words, et Spiritui sancto, the melodic line is inverted to symbolize the descent of the Holy Ghost. Also in the chorale-prelude • 'Old Mam's Fall," the fall from grace to sin is symbolird through a series of more or less gruesome diminished sevenths. There are also numerous examples in Bach's works of the cross motif (Chiasmus), an arrangernent of notes in the shape of the cross that can be both heard and seen (e.g , in No. 51 of the St. Matthew Passion, "'Give me back my Lord, I pray ye' i). Examples of pictorialism are numerous in the St. Matthew Passion. For example, in No. 9, a motif intoned by two flutes conveys the gentle flow of tears. In No. 20, the ascent to the Mount of Olives is indicated by ascending notes. In the same piece, Jesus 's prediction of his desertion by the disciples and the words, "The sheep of the flock shall be scattered," are accompanied by the strings in an agitated contrary motion passage between the upper instruments and the bass singers (Terry, 1926). In No. 60, a realistic description of Jesus's flagellation is given. In No. 69 ("Ah, Golgotha"), Bach uses piaicati violoncelli to portray the funeral bells.

or did you mean this cross? If you look at this original score page you can see a cross ...

The melody of Am Stamm des Kreuzes geschlachtet (slaughtered at the stem of the cross), the second line of Decius' chorale, is shown twice in red ink, without the words, on this page of Bach's autograph score: in the middle of the page for the ripienists, and in the upper of the two staves for organ II at the bottom of the page. 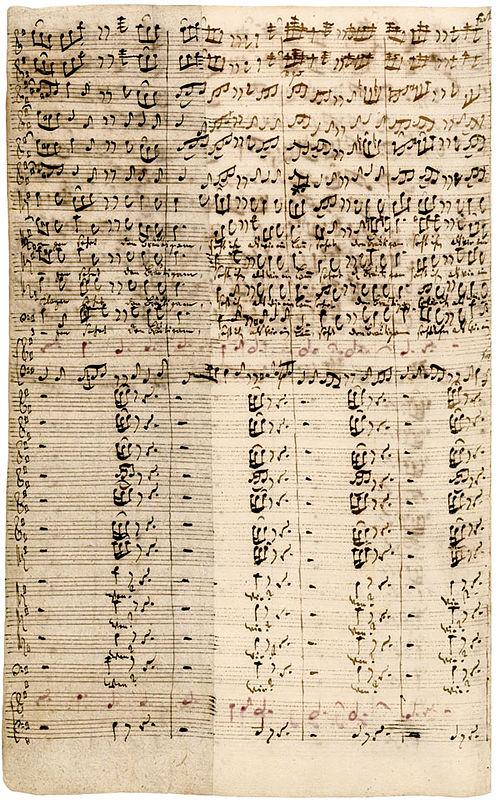 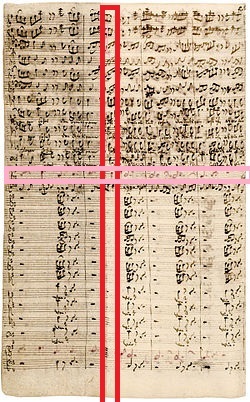 but maybe in all other scores too! 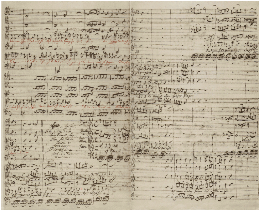 Not the answer you're looking for? Browse other questions tagged sheet-music j-s-bach or ask your own question.

7
When was the first recorded usage of a musical score?
6
Lilypond generated with MuseScore does not fit the width of the page in XeTeX doc
1
Sharps at the start of a score
7
Were the Goldbergs meant to be played in one go?
6
Theory behind Bach's deviations from the scale
7
How does one know if a score is notated well?
3
What does the abbreviation “SA” in my score mean?
1
What is the function of the two segnos in this score?
6
Bach's Toccata and Fugue in D minor breaks the “no parallel octaves” rule?
2
What are the “slight changes” Gounod made to Bach's The Well-Tempered Clavier when he wrote Ave Maria?