Are modes in jazz primarily a melody thing?

I was wondering when jazz cats talk about how they'd use a Lydian scale to improvise over a major chord, or a Dorian scale to improvise over a minor chord they're mainly talking about the melody? So the harmony is generally diatonic chords of the scale (say ii7-V7-I7). So in the key of C major that'd be Dm7, G7, Cmaj7. The improvisation (as an example) would be D Dorian, G Mixolydian, C Lydian. So in a piano, that'd just be my right hand doing that modal stuff (and keep away from b9 avoid notes with whatever chord tone I’m currently on) and my left hand remains in C major.

Does that sound right? I think the improvised melodies are modal and sometimes altered modal scales. But we're just talking about the melody right? They keep the harmony pretty basic/diatonic chords?

To your question "are modes in jazz primarily a melody thing?" the answer is: modes are simply fancy names for scales. These scales can be used to define the melody and the harmony. The straightforward approach is for those two things (melody and harmony) to agree with each other.

At the risk of sounding over-critical, your example of Dm7 - G7 - Cmaj7 using the three modes of D Dorian - G Mixolydian - C Lydian (or maybe C Ionian?) would in fact be using the same 7 notes all through the sequence. With your change of #4 in C Lydian. That idea is as simple as one would use when improvising over those three chords in any case - obvious target notes being D, G and C in turn.

Since you're talking 'scales and modes', this will be essentially melody playing. Over existing chords, usually belonging to an already written song - a standard, maybe. So the harmony/chords are already there to be played over, denying them the pleasure of being labelled 'modal' anyway.

So, I don't think there is any particular 'modality' involved here.

Also, ♭9 isn't always an avoid note - I use it regularly - it has as much credence, being a semitone away from a potential target note, as the leading note has.

You're sort using mode and modal interchangeably, but you probably shouldn't. Modal implies a jazz style different from your ii V I type playing. The essence of this question was covered in questions you asked previously. I don't really understand why you've posted again.

Yes, you are describing the "chord/scale" approach correctly. The kind of thing you find from Jamey Abersold...

...on that page he uses Ionian for the I chord, and the solid note heads apparently are for the chord tones. This one just shows ii V I in all major keys.

I think it strange how the lesson is titled with "all major keys", but then it doesn't show key signatures, but spells out the scale with accidentals. I really don't understand this attitude from jazz teaching. It seems to me on one hand they acknowledge major/minor keys are in effect, but then don't want to use key signatures. Notice also Roman numeral analysis is used in the title ii/V7/I, but then some people say jazz harmony is chromatic and non-functional. I understand it, but from a teaching perspective it seems confusing for a beginner. The chord/scale system seems like an attempt to avoid learning functional harmony.

Anyway, Abersold has special lead sheet for jazz standards that look similar to this ii V I lesson where the chord changes are above the staff and the basic scale is notated. For example, he has Maiden Voyage with changes and notated scales. The idea seems clear: the chords come from an original song and scales are selected to match the given chords... 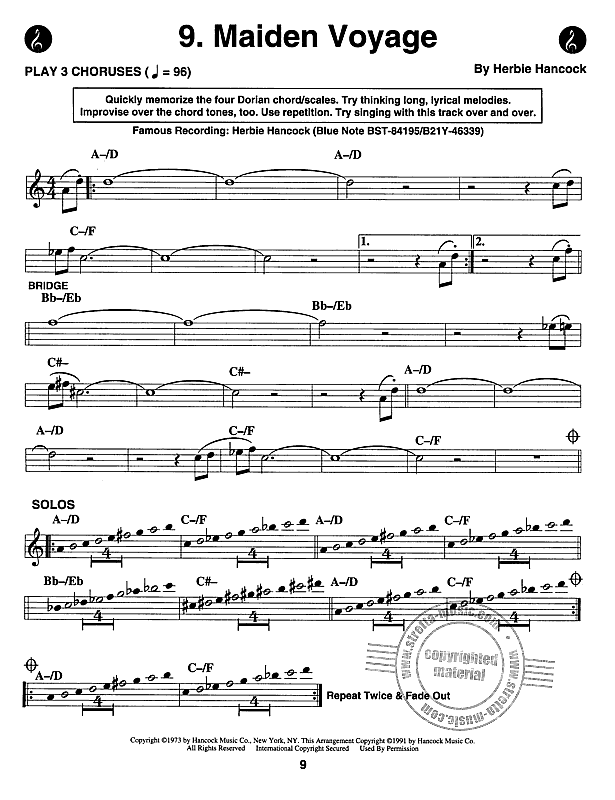 The other option - the historical way - is to play the arpeggios for the chord changes with embellishments like diatonic passing tones or lower chromatic neighbor tones.

To play in a mode is more than just playing the right notes. You need to make the root of the mode feel like home and that is the difference between playing in C major or D Dorian. Same notes but D sounds like home in one and C in the other – b3ko

@b3ko exactly, I guess my question is does the harmony/left-hand change that root or does it keep it in the original scale. I've been looking at jazz standards and they all seem diatonic (except for secondary dominants) as far as whatever scale is currently being played harmony wise. the melody however, really changes things up when improvisation is concerned. – foreyez

...I get the sense you are confusing the idea of tonic and chord root.

The wording in those comments should be tonic of the mode when speaking of scales and tonal centers. Root should only be used when talking about chords.

The root of ii7 is D but it doesn't mean the tonic has changed to D Dorian. The tonality isn't switching from C major to D Dorian. The harmony is not modal. The chord root is D and the tonic is C. In such a case Dorian is just a fiction of the chord/scale system.

The similarity of playing a full octave scale from D4 to D5 in C major to D Dorian is coincidental. The real difference between the two is entirely a matter of how the harmony is handled.

At the risk of mixing styles, I think a classical example offers a good comparison. This is a famous passage, scale based, clearly diatonic, in C major... 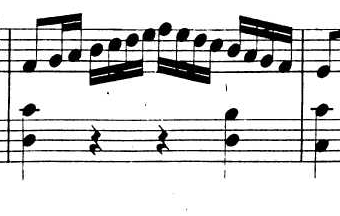 ...conveniently the harmony is ii7 V4/2 I. The treble part is a scale F4 to F5, but no sensible analysis would say the passage is in F Lydian. All the tones for F Lydian are there, and there is an F Lydian scale, but that is coincidental and doesn't matter. The harmony is what counts and it's clearly C major.

We can compare that to the follow from a handout from a jazz improvisation college course...

...the treble part plays the exact same descending line. It's all the tones for F Lydian, but it makes no sense to identify it that way. It's in C major.

The chord/scale system would describe this descending line as ^3 to ^7 of D Dorian followed by ^3 to ^7 of G Mixolydian ending on ^3 or C Ionian. All of which is coincidental to the completely obvious point that the whole line is F5 to E4 in C major.

That example is a bit unrealistic, because it's just part of a lesson. We can use another example that looks more like a real improvisation...

...the line over Dm7 certainly looks like it's a partial D Dorian scale. But the important point is the music is not in D Dorian. It doesn't matter that you played a nearly complete D Dorian scale starting on the purported D tonic. That D Dorian look-a-like scale is just a coincidence. The passage is simply in C major. It isn't even temporarily in D Dorian.

...I guess my question is does the harmony/left-hand change that [tonic] or does it keep it in the original scale?

No. When you play anything that is properly a ii7 or V7 you are not changing the tonic. Yes, it keeps to the original scale of C major. Playing D4 to D5 over a ii7 in C major is just playing the C major scale except your aren't starting on the tonic.

The chord/scale system notion that it is a D Dorian scale simply because you started on D and ascended step-wise can just be turned around. If we dont't do that and play something like this... 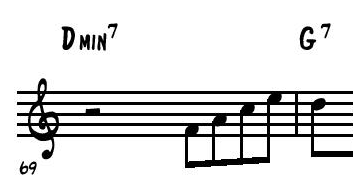 ...why should be regard it as derived from D Dorian? There isn't a step-wise scale, there isn't even a D!

Of course the reply is: it is not derived from D Dorian. It is derived from C major and emphasizes the chord tones of ii7 with the E extending it to ii9 or it could be regarded as an anticipated appoggiatura to the chord tone D of G7.

I think you should really look at other jazz methods and not stick doggedly to the chord/scale system. That system has it's critics and there are people who teach a functional harmony/chord tone approach.

10
Using modes and static harmony
9
What's the value of modes?
2
Modes over II-V-I
3
Relationship between modes and keys
3
Modes on the guitar
3
Is the melodic minor scale use as the basis of chord progressions in modern jazz?
3
Whole-step technique for figuring out jazz scales?
4
Do jazz musicians improvise on the parent scale in addition to the chord-scales?
3
What are the modal characteristics of major modes?