What does the author mean in these examples of chorales & harmony?

This is an example in G major. I am learning about Bach's chorales & how he uses modulation. I came across a page online (choraleguide.com), & in one example given, I couldn't understand what the author meant by the statement 4 on passing seventh. 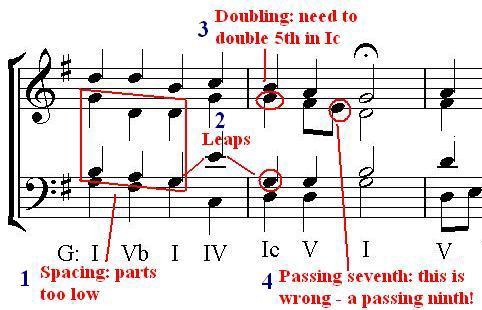 The explanation given is: "at a cadence the passing note should be the seventh of the dominant chord - in this case C rather than E".

Also, I couldn't understand statement 5, which says: "the suspended D in the II7b chord needs to resolve downwards by step to C#". 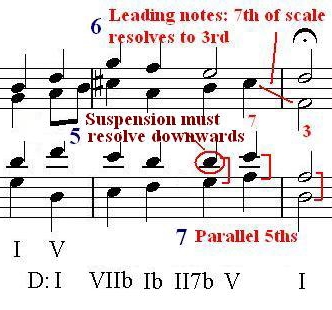 I know that the chord II7b, V and I have consecutive 5ths between the Tenor & Bass parts. But I don't understand the point of the D resolving to C#. Is it because of the consecutive 5ths, or there is another reason?

If you want to pass an exam in writing 4-part harmony, the leading note (i.e. the third of a V chord) always moves to the tonic of the following I chord.

But you can easily find example in Bach where that doesn't happen, and he writes something like the cadence at #4 instead - though it looks like there is a typo in that example, because the "V" chord has a G in the tenor which doesn't belong there at all. I guess it was meant to be an A.

In the second example, I suppose you are "not allowed" to use any 7th chords except the dominant 7th, and therefore the D in the "II7b" is explained away as a suspension from the previous chord. The rule that "suspensions must resolve downwards" is just another arbitrary rule designed to keep beginners out of trouble. In fact, following it here would have avoided the horrible mess of the three lower parts moving exactly parallel for three successive chords, including the parallel 5ths - in the V chord was A C# A E, not A E C# E, with the "suspended" D moving down to C#, all the other "rules" are obeyed as well.

Not the answer you're looking for? Browse other questions tagged theory harmony chord-progressions j-s-bach chord-voicings or ask your own question.

5
What does the 15 mean?
3
What relation does harmony have to repetition?
1
Why does this harmony work?
5
How a chord is analyzed as a “chromatic mediant of the V”?
5
How to realize a figured bass
3
Modulation from D major to D minor, should I go sudden or gradual?
4
Diminished seventh spelling but functioning as an Augmented Sixth?
2
What do these arrows mean?
1
What does “non-conformant” harmonization mean?