Should these notes be played as a chord or one after another?

A fairly basic sight reading question coming up... Are these notes (highlighted) intended to be played as a single chord or one after the other? They are so close together that they could be played as a chord (which also sounds correct) but if that were the case they would have a single stem. 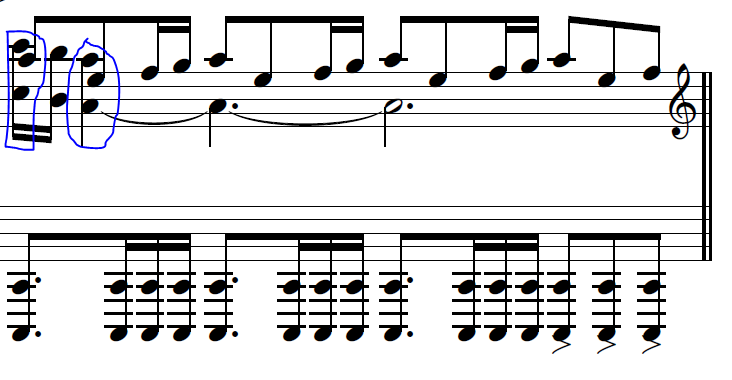 notation sight-reading
Share
Improve this question
edited May 11 '19 at 21:48

The notes happen simultaneously, but it’s notated this way to indicate that two independent lines are happening. The A E F G moving line should sound distinct from the octave-doubled line. This will be subtle, but there are ways to have more or less weight in some fingers in order to get enough dynamic difference to distinguish the two voices.

I’m guessing this is an amateur arrangement of the Game of Thrones theme right? If so, then you just want to make the repeating ostinato insistent, but “underneath” the more prominent melodic line. The octave doubling should make this easier.

They are played together. Reason for different stems is to differentiate the different voices, sort of alto here, and to emphasise the octaves in the lower part of the treble clef. All on one stem would look crowded and not easy to read.

Regardless of the voices, the notes do not share stems because because the notes are different lengths (i.e. some are eighths and some are sixteenths) and they therefore can't share a stem. I have never seen a professionally arranged piece that doesn't do this--if you have different rhythms, the chords cannot share stems even if you play some of the notes at the same time as others. I cannot think of a way that they even could share if they are different lengths--a whole note, for instance, doesn't even have a stem but is often held while several shorter notes are played concurrently. I just took a quick look through my Hamilton piano sheet music book from Hal Leonard and see lots of examples; for instance, "That Would Be Enough", measures 2, 11, 12, and 23-26.

So in this posted example, take for instance the first circled chord (plus the immediately following note): you would play the double-octave C and B in the same time it would take you to play the A. Similarly, for the second circled chord, the double-octave A quarter note would be held while you play the E, F and G, which are an eighth and two sixteenths respectively (and then you hold the lower A dotted-quarters while continuing that repeated upper motif a couple of times).

Not the answer you're looking for? Browse other questions tagged notation sight-reading or ask your own question.

6
Question from non-musician: Is it possible to learn sight-singing without having learned an instrument?
7
Sources for sight-reading exercises that focus on subdivisions (emphasis on drums)
7
Does the existence of a chord tone (and its enharmonic spellings) imply the absence of another?
32
How do experienced pianists sight-read chords?
2
Left hand right hand confusion - reading
27
I sight read at 20 bpm, and not getting any faster
4
Are there exercises or techniques to improve sight reading?
2
GuitarPro Notes Displaying One Octave Too Low
6
What notes comprise a (only) “sus” chord?