What's the difference between these two sets of nylon strings (Folk vs non-folk)?

I was looking for nylon strings and noticed that Ernie Ball has two different sets available that are both gauge 28 to 42 and have ball ends.

One is sold as "Ernesto Palla" Nylon, the other as "Earthwood Folk Nylon". 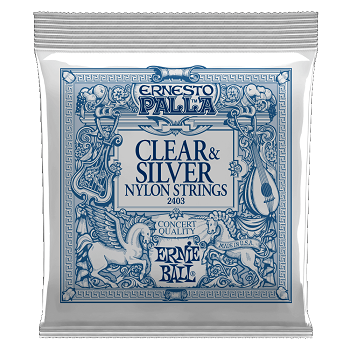 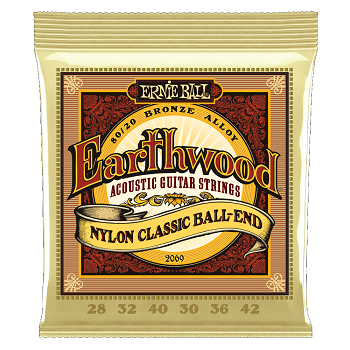 What is the difference? Does "Folk" imply a particular tone?

strings classical-guitar tone
Share
Improve this question
asked May 10, 2019 at 20:37

I’m not sure but I expect the top package has a brighter tone and is intended for classical style guitar. The bottom package probably has a darker sound that might be used more with folk, rock, and pop style playing.

The term "folk guitar" is often used to describe a guitar which is designed for use with nylon strings like a classical guitar, but has a string spacing closer to that of an acoustic guitar and for whatever reason uses a tailpiece with notches for ball-end strings rather than one which is suitable for tying plain-end strings. This latter "feature" has unfortunately resulted in many such instruments being strung with ball-end steel strings and consequently destroyed by the higher string tension.

Using plain-end nylon strings on a folk guitar would require affixing some sort of blobby thing at the end; I would guess that sliding on a bead and then using the flame from a match to melt the nylon string into a blob would probably work, but I've never tried that. Using ball-end folk guitar strings is probably a much easier approach. Tying the knot required for a classical guitar might be awkward with a ball-end string, but cutting off the ball end should yield a plain-end string suitable for use with a classical guitar that would otherwise have trouble with a ball-end string.

Not the answer you're looking for? Browse other questions tagged strings classical-guitar tone or ask your own question.

7
How do different strings (of the same gauge) affect the tone?
1
Nylon strings for alternative tunings on hollowbody electric
0
Yamaha G-String keeps breaking
1
Why do flamenco guitar players use different tensions (gauges) for the bass and treble strings, "colored" treble strings, and a "special" 3rd string?
1
What are the best strings for this guitar? Steel or nylon?
7
Does the Thunderbird actually need special strings?
5
Does non-calibrated have a special meaning for guitar strings?
3
What's the difference between rectified nylon strings and regular nylon strings?
0
Installing Ball-End Nylon Strings on a Classical Guitar