As you might know from my previous question on staccato vs pizzicato, I am arranging K 545 for a string quartet. Instead of just doing the first movement, I will be doing all the movements. I need some advice on arranging the second movement of K 545 for a string quartet. I only really hear 3 active voices with a possible 4th voice at the cadences(of which there are a lot because it is in the form of a rondo).

The layman's solution would be octave doubling. But I want to add to the existing harmony, not just the texture. So I was wondering if any of you had any advice for me. Another easy solution would be parallel thirds like I use in the scalar transition of the first movement. Except it isn't as easy to make it harmonically sound with the bass as it sounds.

Here is a video of the Andante movement on a piano so you can hear what I'm talking about when I say that there are only 3 active voices:

I guess I could use call and response but I only see a few suitable places for it. Namely, where I see basically the same melody repeated twice before moving on(and a lot of these are 2 bar melodies in a larger phrase).

Here are the correlations between the voices in the piano score and the instruments in my first draft of my arrangement of the second movement:

I was thinking that if I'm going to use pizzicato, this second movement would be an ideal place to do pizzicato(only a few forte dynamics, most of it is quiet). If that requires moving the Alberti bass up to higher staves and octaves so that the cellist can transition to arco for the cadences without it being sloppy, then so be it. Though I think, at a tempo of quarter note = 60 BPM, this could occur without any rests at all and still not be sloppy, though I may be wrong on that.

So yeah, any advice on writing a part for the second violin that isn't simply in parallel thirds or octave doubling with the first violin while still staying honest to Mozart's original harmony?

And here is the link to my staccato vs pizzicato question:

Making an arrangement isn't about finding a combination of instruments that can play all the notes exactly as written in the original. It's about figuring out what was going on in the original, and then creating a similar effect.

Alberti bass figuration was just a simple way to cover up the fact that the piano (especially in Mozart's time) couldn't sustain long notes. It is pointless for a string quartet, where the instruments can sustain notes for as long as you like without any help.

But you need something going on beneath the long notes of the tune, so in the first version below I shamelessly stole one of Haydn's standard tricks (and Haydn was a genius at orchestration, so he's worth copying!). The accompanying parts play the different notes on the "main" beats, but the same note on the off-beats.

I put a rest at the start of each bar just to give the accompaniment a bit of rhythmical articulation.

If there is some "movement" in the inner parts, there's no need for the cello to be sawing away on separate quarter notes, which it can sustain one note over 2 or even 4 full bars, at this tempo and dynamic level.

If all that is too radical, version 2 just uses one instrument to play a tremolo instead the Alberti pattern, and doubles the tune in octaves (which lets the first violinist show off a bit playing the high notes).

But the 16th notes are really necessary. Version 3 works just as well.

Note: as an exercise for the reader, spot the deliberate mistake on one of the three versions! 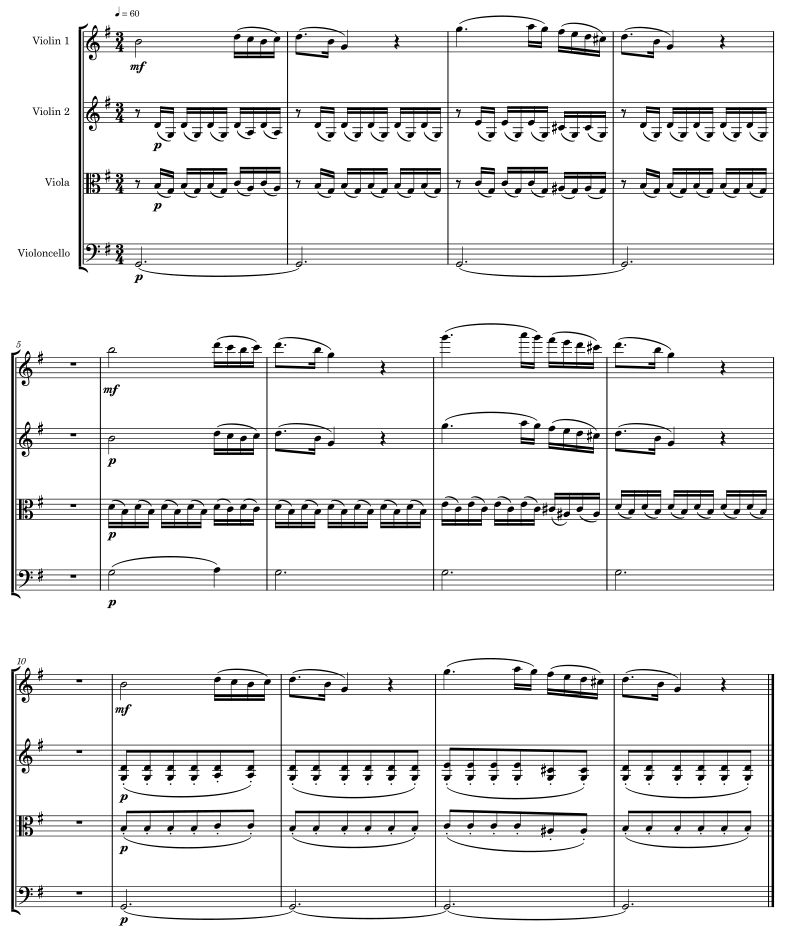 Not the answer you're looking for? Browse other questions tagged string-instruments arranging or ask your own question.

2
How to represent the staccato in the piano score?

11
Composing/Arranging for a String Quartet
0
Converting midi composition into orcherstral arrangement
2
Workarounds for 10th intervals or larger when arranging for piano
1
Advice on arranging piano music for wind quartet?
2
How to represent the staccato in the piano score?
3
Can violins change notes in the middle of a double stop?
13
How to transcribe an arpeggiated 4-note chord to be playable on a violin?
2
Arranging K 545 for a string quartet, how to write the harmony part
3
4th octave Eb in Chopin, should I trust that the flutist will get the note?