Will this help me avoid parallel octaves in future fugue attempts?

So, I wrote a canon before I was even thinking about writing a fugue and I found it to be trivially easy. But then again, I did take the Pachelbel approach, decide on a bass line and then make everything harmonically fit. Harmonies changed as I made more variations on the melody but I still kept all my dissonances either short passing and neighbor tones(so all my leaps were between consonances) or as a seventh resolving the way it should. That and my canon was at the unison.

A more Bachian approach would be to start with just the melody and then as I add voices, the bass line just appears from what seems like nowhere. No ground bass like in Pachelbel. Closer to a fugue in its nature except there is no countersubject or any other kind of contrasting melodic material between voices that isn't simply due to a delay in the appearance of a particular group of notes which is intrinsic to a canon.

My attempts at writing a 4 voice fugue have been futile. I was always thinking:

This has, every single time for me, lead to an instance of parallel octaves because I'm like:

Okay, I have reached an octave, now what? Going down to a 7th won't work because that will lead me back to the same octave. Going to a 9th also won't work unless it is between the tenor and the alto because I can't play a 10th interval with a single hand so if the 9th is between the tenor and the bass or between the alto and the soprano, my only choices are either to go back down to an octave or to leap. Going back to an octave seems like the better option because I conserve leaps, but it just delays the resolution of the octave. Contrary motion to a 6th might work, but what if that doesn't fit with the harmony? Only other solution I can think of that doesn't break the parallel octaves rule is a leap in 1 or both voices involved in the octave. And in general I want to use as few leaps as possible outside of maybe a subject entry, and if I have to use a leap, I would prefer a third over a sixth.

And sometimes I don't see any solution other than going to another octave and that is when I break one of the most important rules in counterpoint if I want multiple independent voices and not just octaves of registration, that being:

And this makes my attempts futile because I am doing everything I can to prevent parallel octaves and it happens anyway. So I was thinking that maybe I'm just not ready for 4 voices yet. If parallel octaves are my main contrapuntal weakness, then I should probably start from 2 or 3 voices, where I am less likely to run into the situation of parallel octaves because there are fewer voice combinations that could have an octave and thus fewer resolutions for any octave that I would have to worry about. That and the octave is not a necessity with 2 or 3 voices unlike how it is with 4 voices. I can simply avoid octaves if everything else fails. So I was thinking of doing this:

Will this help me avoid parallel octaves in my fugues no matter how many voices or how complex the fugue gets, starting with 2 and 3 voices and gradually allowing more octaves as I get better at resolving octaves before moving on to 4 voices or more?

You can have a fugue in 3 or 4 voice while keeping the widest interval for each hand to an octave or less. 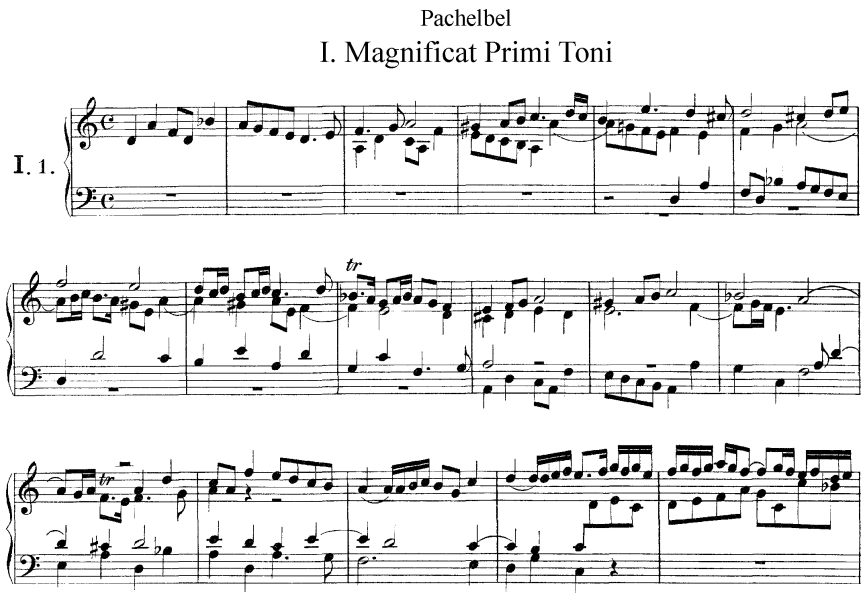 Unless I missed something the whole fugue does not go beyond an octave in either hand. The texture is mostly 3 voice and a full 4 in some places. 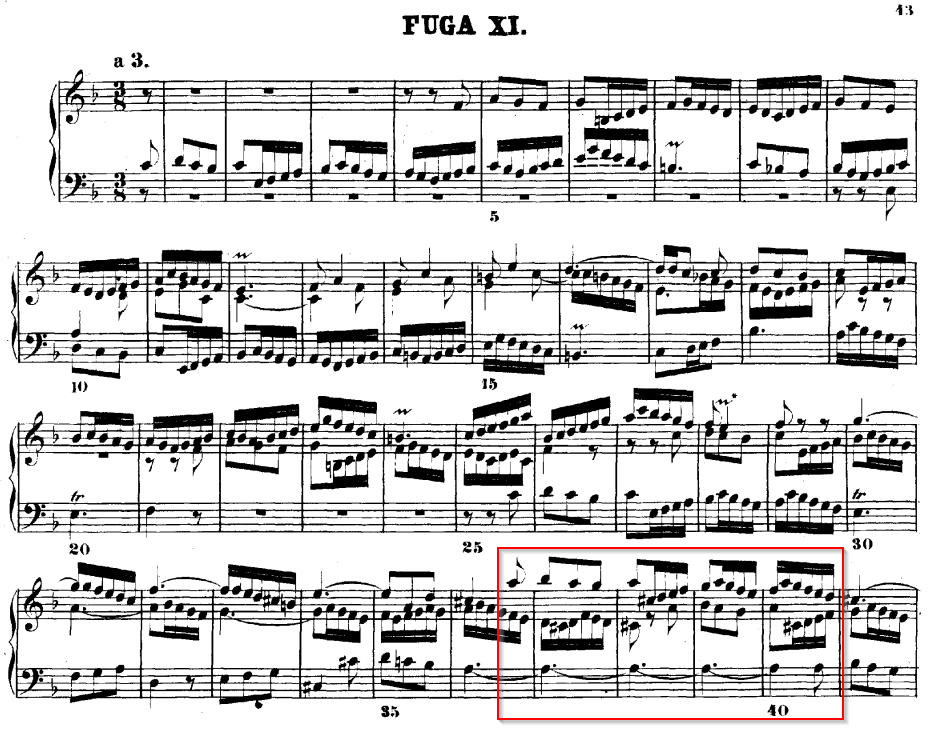 The part boxed in red presents a trouble spot where the middle voice needs to be swapped between the two hands, because it isn't playable all in the left hand.

I would say generally - in both of these collections - the norm is for the voice to not separate farther than an octave in each hand, like this...

...but it doesn't happen a lot, usually the large gap is between the bass and the upper voices rather than large gaps between upper voices, and the large gap will either be not in a single hand or you can swap which hands play the parts so they are reachable.

In the last example above notice there are two 1 fingerings (red circles) in the bass clef. Obviously you can't play that as two 1's in the left hand. The tenor part is meant to be played with the right hand (green box.)

Usually the soprano, alto, and tenor upper parts don't separate by very large intervals. When there is a large gap - like a 10th or greater - it's most likely going to be between the bass and the upper parts.

...the largest interval I can play on the piano with 1 hand is a 9th... This has, every single time for me, lead to an instance of parallel octaves

I don't see why the limit of your hand span has any bearing on good voice leading. The two fugues above show that you can do it. All the detail about canon, invertible counterpoint, the procedures you described seem confusing distractions. Study Pachelbel and Bach and do what they did. If your procedure is creating bad counterpoint, something must be wrong with the procedure. Fugue texture for 3 or 4 voice with a normal constraint of voice spacing is not the problem.

If you do have a large and problematic interval, try to either play the interval 'broken', or try to displace the problem segment by an octave to bring it into reach.

EDIT after the score was posted...

...of course the chords are incomplete, because there are only two voices.

If we change from Roman numerals to scale degrees...

I think the part writing will be easier if the two part writing sticks to the essential chord tones. Basically you want to use roots and 3rds, for the dominant chord the 7th with either the root or 3rd should work. The combined harmony should be primarily thirds and sixths.

Stick to tonic and dominant harmony in the exposition.

Back to your example where ^2 ^4 is in the bass part. Instead of doubling the ^4 in the treble using ^5 or ^7 will better complete the chord.

Ideally what happens next will change your original subject. the ^4 in the bass should go to ^3. Then the treble would harmonize ^4 with ^7 or ^5 then move to ^1.

Without changing your rhythms, and trying to keep the subject close to the original, hitting roots and 3rds, it could be like this...

...I think if you stick to that formula good part writing will be easier.

I'd like to say that your scheme will help you avoid parallel octaves in your 4-voice solo piano contrapuntal works, and intuitively, it should (at least IMO), but I cannot guarantee that you will not continuously trigger parallel octaves at 3-voice works.

3-voice works fall prey to many of the same triggers for parallel octaves as 4-voice works (assuming your description of such triggers is true). You basically go through the process of your second block quote in any hand that has two voices an octave apart.

Because you will encounter the process of your second block quote over and over again with 3-voice canons with at least one octave interval between voices in one hand, I cannot guarantee you will ever overcome that process.

Practice with 2-voice canons and fugues, but it's quite possible that you cannot progress to 3-voice works without creating parallel octaves.

You are making things difficult for no reason. There is no "rule" that says you have to play two parts with each hand!

This is a snippet from a 5-voice fugue by Bach (C# minor, WTC Book I) - three parts in the right hand and the bass line more than 2 octaves away. And note at the end of the clip, the top part is nearly two octaves above the second one.

And the next fugue (D major, four voices) does exactly the same thing, so it wasn't just an isolated incident:

In fact, having a huge interval between the middle parts is "breaking the rules" - for the good reason that it usually sounds horrible.

Not the answer you're looking for? Browse other questions tagged composition counterpoint fugue or ask your own question.

1
Can you introduce fugue themes in the middle of a measure? If so, how?
1
In Second Species Composition, how do you traverse an octave between downbeats
6
Bach's Toccata and Fugue in D minor breaks the "no parallel octaves" rule?
7
Could this Scherzo by Beethoven be considered to be a fugue?
7
Should we avoid two consecutive leaps forming triads in cantus firmus?
1
Why is there an octave leap in this example from Gradus ad parnassum?
5
How to realize a figured bass
2
Is there a rhythmic counterpart to voice leading? Is counterpoint supposed to fulfill this role?
1
which pair of notes can't be parallel in Counterpoint