This is about how the harmony is working in Rondo a Capriccio by Beethoven. Here is the passage I am talking about: 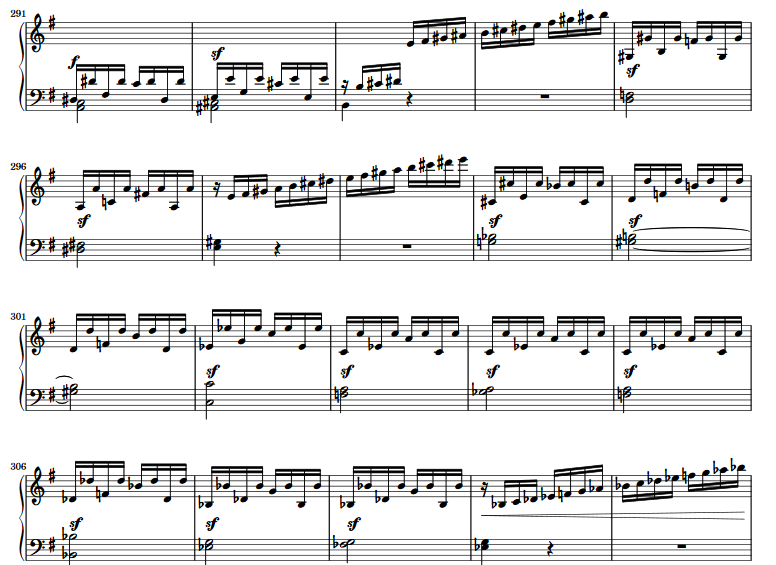 So starting at measure 291, there is a passage where 7th chords go up chromatically, and the majority of these 7th chords are diminished 7ths. The seventh chords only last for 2 bars until there is a break from them with a scale. So let me try to figure out the harmony here.

A, C, D#, F#, this is an enharmonic respelling of Adim7 to better fit with the key signature of G major. And then that goes to an A#dim7. What scale comes after these 2 seventh chords? Well it starts on B and then goes up and it has 5 sharps. It must be B major. C and C# are skipped.

D, F, G#, B, it is a Ddim7, again respelt to fit with the key signature better. That goes to D#dim7 which then lands on an E major scale. E and F are skipped.

G, Bb, C#, E, it is a Gdim7 though here, it doesn't really fit with the key signature better than if the C# was written as Db. But that would mean spelling the E as Fb which doesn't fit with the key signature at all. As predicted it goes upwards to G#dim7. But here, Beethoven breaks the pattern of 2 diminished 7ths followed by a major scale. If he were to continue the pattern, it would end up on an A major scale. But it doesn't. We get our first resolution. G#dim7 goes to C minor. Beethoven sure loves his C minor.

The resolution doesn't last for long though, he keeps going with the 7th chords. F, A, C, Eb, this is F7. I would expect it to resolve to Bb. So what does Beethoven give us? The unexpected is what he gives us. He gives us an Adim7. The Gb then goes back down to F giving us another F7. This time, it does resolve. Not only that but Bb is the temporary tonic note. It resolves to Bb minor.

This then goes directly into Eb7 the same way that C minor went directly into F7. I would expect it to resolve to Ab. But, of course, Beethoven has to give us the unexpected. He gives us a Gdim7 respelt with an Fb instead of an E like the previous Gdim7. This then lands back on Eb and Beethoven gives us a scale. However, it isn't a major scale like the previous ones. No, it is Bb dorian where I would expect Eb major. Then he finally resolves it to Ab without going to another 7th chord right after, ending this 20 measure long, chromatic passage. He then has to go back to G somehow but that isn't my focus here.

So, yeah, it starts off with a pattern of 2 diminished 7ths a half step apart followed by a major scale. Then it deviates from this pattern with the first resolution to C minor. This then starts another pattern of root position dominant 7th, third inversion diminished 7th with root a third above the previous chord root, same root position dominant 7th, resolution chord which then ends with Ab major. So this way, Beethoven has practically brought us all the way up the chromatic scale using these 7th chords.

But why does this work, this chromatic scale in the harmony? I think it has to do with not only the pattern and how it is deviated but also the circle of fifths. 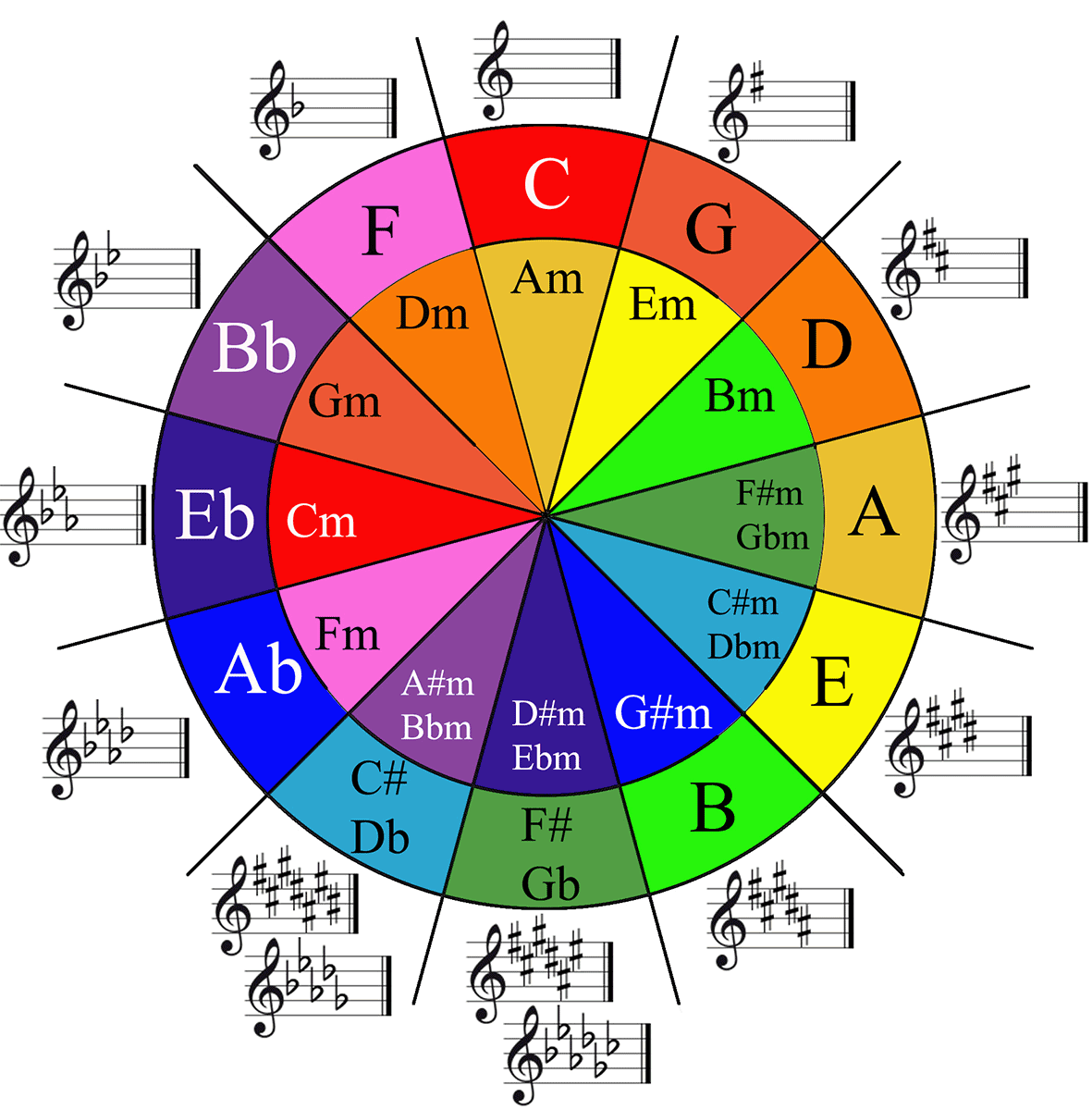 Is the circle of fifths the reason why this progression of 7th chords works?

First, let me start with a claim:

Bass motion from scale-degree 4 through ♯4 to 5 is very common in this style.

So common, in fact, that some scholars have taken to calling this pattern a "dominant lock" since it is so frequently used in sonata movements to prepare a dominant.

In my view, this is exactly what's happening in the opening four measures. As you correctly said, m. 293 has an E-major scale. Beethoven here is prepared for a dominant of E (that's the B in the bass of m. 293), and he does so with the "dominant lock" motion of 4–♯4–5 in the bass. Spotting this larger pattern is, to me, more helpful than analyzing the chord of every single measure, especially since each measure lasts less than a single second in most performances (!).

Here's where my view of the circle of fifths comes in, if we choose to include it: Beethoven does this same thing, but now down a fifth. The only difference is that the current tonic of E major holds firm in m. 297, instead of this being a lock onto the dominant of A.

Once again he moves everything down a fifth, but this time he stops the 4–♯4–5 motion one chord early. Here, he enharmonically reinterprets the chord above ♯4: although written as a G♯ diminished seventh, he resolves it (somewhat oddly) as if he understood it as a B diminished seventh, therefore resolving to C minor.

This C minor is then ii in the eventual B♭ tonic; it moves to V7, and a neighbor note (G♭) in the bass prolongs this F7 chord in mm. 303–305 before moving to the tonic B♭ minor. In my opinion, viewing this bass neighbor note is far more helpful than viewing it as a completely different diminished seventh chord in third inversion.

Finally, he sequences these most recent four measures not down a fifth, but down a step: it's now V7 in the key of A♭, and the F♭ is again just a neighbor note in the bass that prolongs that E♭7 chord.

In short, there are moments of this excerpt that are based on the circle of fifths, but I don't personally feel compelled to explain every harmony from that standpoint. Instead, I think it's more helpful to spot larger motions:

Not the answer you're looking for? Browse other questions tagged harmony chord-progressions key beethoven or ask your own question.

3
Modulating from A-flat major to C major (Beethoven)
6
What's going on in measures 11 - 16 of Beethoven's Sonata Appasionata?
5
Is the diminished chord not as relevant as the other diatonic chords?
3
How to overcome emotional tension with this Beethoven rondo
3
Why does the first diminished 7th in this progression not resolve?
4
Rootless chords in Beethoven sonata?
1
Measuring key-relatedness of chords on the circle of fifths
4
Diminished 7th notation, match the key or key signature?
3
What makes Beethoven’s False Picardy Third so convincing?
2
Inversions of diminished 7th chords