Which of the following examples is correct? 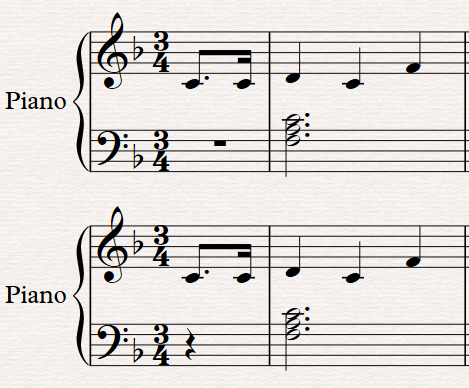 I know that in regular measures you can use the whole rest to indicate a complete measure of rest in any time signature, but does that also apply to a pickup bar?

Would you use there the actual note duration or also just the common whole rest?

The lower version is right, definitely. You write the pickup measure with the actual note durations, not like "read all staves and try to figure out if this is a pickup bar or not".

Think about if those weren't a grand staff i.e. tied treble and bass staves, but a score with two separate instruments. Would it be OK to write a whole-bar rest for the second instrument? If the player read only her own staff, she would have no way to know it's a pickup measure!

Actual note duration for the rest. What should happen at the other end of the piece is a part bar containing the two 'missing' beats - often as rests - but increasingly forgotten, sadly. So if there is the remains of the bar at the end, it's best to use a two beat rest there, making a full bar rest at the beginning rather pointless.

Having said that, I don't think anyone would be confused by the first example, but some would be picky - me included!

Not the answer you're looking for? Browse other questions tagged notation anacrusis or ask your own question.

13
Do some measures get no numbers, in an opera score?
8
Is there a rest symbol that means "rest until the end of this measure"?
6
Are whole notes/rests really used to signify variable lengths of time?
8
Partial Measures with Matching Ending Measure
3
Unplayed 2nd voice in notation - spaces or rests
6
Notation of last measure of a song with a pickup measure
13
Can one use a whole note to span a full 5/4 measure?
2
Problem Understanding Specific Rules of Adding Rests
2
Recognise anacrusis in MuseScore, from Lilypond's midi files
7
What is the meaning of this tempo marking?