Why is the relationship between frequency and pitch exponential?

I read that the formula relating frequency to the note played was:

Where F is the frequency in hertz of the note played and n is the number of notes from middle A.

It seems strange to me that this relationship is exponential, doesn't it make more sense for the relationship to be linear, so it is easier for the musician to quickly subconsciously predict what each increasing note will sound like?

Is there even any point in this formula at all, or is it just a strange convention? If it is just convention, then where does it originate?

It's because the way the ear actually hears pitch differences (for most people) is based on frequency ratios, rather than absolute frequency differences.

I'm not an expert on the physiology, but I believe there are even physical characteristics of the ear that relate to notes an octave apart (which corresponds to a doubling in frequency) being heard as somewhat equivalent.

By the way, the formula you quote describes how to find note frequencies in an equal temperament system; this system came into common usage over time as a clever compromise that allows many different combinations of notes with 'almost consonant' harmonic relationships to be sounded. There are other systems of temperament possible, and therefore there are also different equations possible, though they will all be broadly logarithmic.

In response to g.kertesz' interesting link - from an evolutionary point of view, it may be that hearing is so precisely logarithmic because of the need for the ear to correlate frequency components that are part of the same harmonic series (i.e. are multiples of a fundamental frequency), as these separate components are in fact likely to be providing information about the same source of sound.

Essentially, it's because we humans perceive pitch on a logarithmic/exponential scale. We hear an octave when the frequency is doubled or halved, not when it has a certain amount added or subtracted to it. Since musicians (well, the western ones, anyway) divide the octave into 12 equal parts, we had to take the 12th root of two as our factor to represent a semitone.

As for the origins of this system, we have to go back all the way to at least the time of Pythagoras, who was one of the first to discover the ratio-based nature of music, and also the harmonic series (which itself is wholly integer multiples of the fundamental). Now, back in Pythagoras' day, there was no such thing as 12-TET - the system we use now and the system described by that handy equation you posted here -, but Pythagoras knew that integer ratios are what drives most harmony, and our modern system of frequencys and their relationships is in large part an approximation of Pythagoras' harmony with some things fixed up. My source for all this is Tom Jackson's Mathematics: An Illustrated History of Numbers. It's a great book, written mostly about math, but math and music are inextricably bound together, and there's a page or two on the origins of music itself.

You can experiment for yourself, too.

Conclusion: Our ears perceive pitch in a logarithmic manner. Therefore, to change a frequency by any amount, one must multiply the frequency by certain factors instead of adding or subtracting. All musical intervals can be represented as a ratio, and multiplying the two frequencies by the same factor produces that same ratio. Adding the same amount to both frequencies does not preserve the ratio.

And if you haven't already, check out this question.

While the answers by topo morto and user45266 are both correct, they do not really go into the "why" from the physiological side. It looks like that the perception of different frequencies is no different from sensory perception in general, which is logarithmic in nature. This empirical fact is known as the Weber-Fechner law.

Same goes for example for visual brightness or the loudness of sound. When we feel a certain difference in brightness our loudness, it corresponds to a certain ratio (as opposed to difference) of the input stimulus (that is the physical intensity in this case).

doesn't it make more sense for the relationship to be linear, so it is easier for the musician to quickly subconsciously predict what each increasing note will sound like?

No. We use pitches to make music, and we can do that without any understanding of frequency. As an analogy, you can watch television without knowing anything about raster scanning (how broadcast cameras work).

People have been making music for many thousands of years, and for most of that time we had no understanding of frequency. We've known that frequency relationships create consonance or dissonance since the ancient Greeks, but we had no method of actually measuring frequency until the 1500s, when Vincenzo Galillei started experimenting with taught ropes - a rope of sufficient length and mass vibrated slowly enough to actually count the vibrations.

Marin Mersenne then took Galilei's work farther, and formalized the math. The result was Mersenne's Laws, which describe how vibrating strings work.

The formula you cite, F = 440 + 2^(n/12), is the formula for 12 tone equal temperament. Because Mersenne showed us that pitch relationships are exponential, and because octave equivalence is a 2:1 ratio, diving an octave into 12 equal sonic steps requires using the 12th root of 2. Use it 12 times in sequence and you've got 2, the octave. You'll need a different formula for other temperaments - and if the temperament isn't equal you'll need a more complicated function.

Is there even any point in this formula at all, or is it just a strange convention?

So it's not convention. And the point is pretty simple: it describes mathematically what's going on.

Just like raster scanning, you don't need to understand it (or even be aware of it) to make use of it.

Actually the relationship IS linear, on a logarithmic scale. Here are 2 graphs, one of the frequency of each note, and one of the natural log of frequency-440. Notice that the second is a straight line. (The frequency-440 just makes the straightness more apparent) 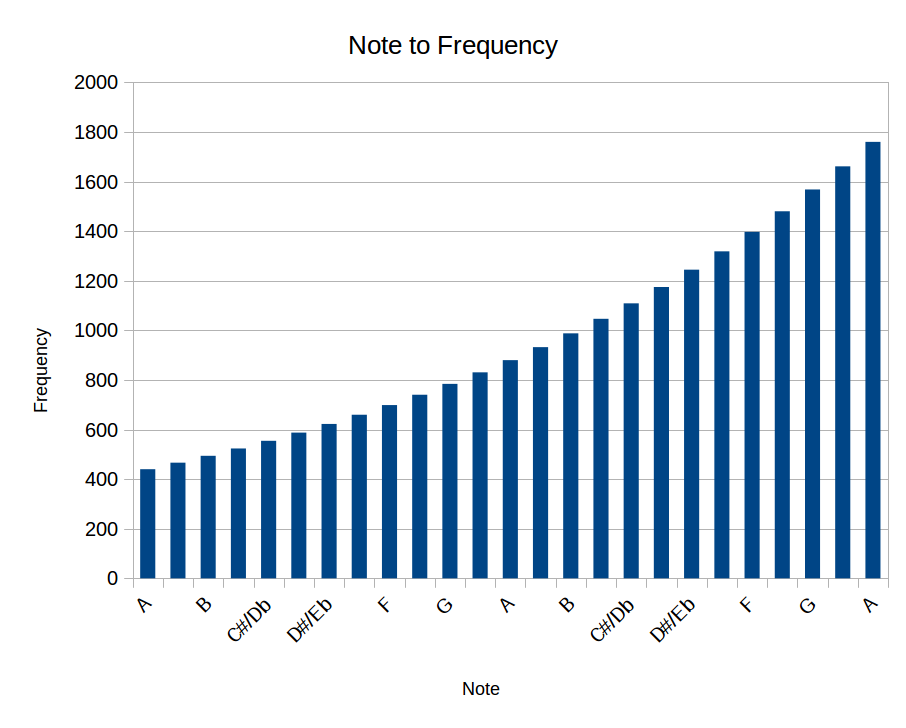 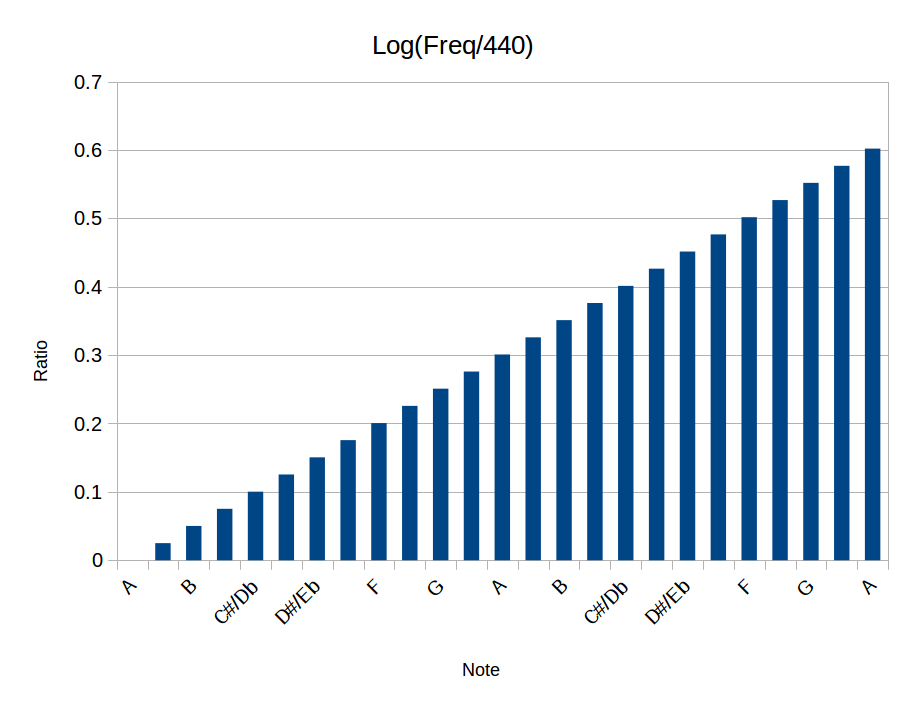 Just FYI: Most older electronic music synthesizers used a linear 1V/octave (1/12V per note) scale for the control voltage on their voltage controlled oscillators. I assume the linear 1V/octave scale was chosen to limit the voltage range required for larger keyboards. For example, an 88 key keyboard would require less than an 8 volt swing to span the entire range of keys.

You have some good answers already but I would like to add one point.

First, as some others have pointed out, your formula is wrong.

Now my main point: you have the cart before the horse. No one sat down and devised that weird formula before they first started to sing. It was developed long after and, as some have mentioned, it only applies to the relatively modern equal temperament system. Older systems did not use strange irrational numbers.

The answer, with the horse before the cart, is that this happens to be how our ears work. We don't hear 440Hz, 880Hz, 1320Hz, 1760Hz, etc as equal steps. It would sound like decreasing steps: an octave (A to A), a fifth (A to E), a fourth (E to A); roughly, ignoring precise temperament considerations.

Others have touched on why so I won't go into that but if you want to convince yourself that it is so then try this experiment.

Find a man and a woman who can sing simple tunes reasonably well but are neither trained musicians nor mathematicians or physicists. Hence they cannot read music and do not know that formula.

Now ask the man to sing with her. Unless he has an exceptionally high voice, he won't sing the same notes but an octave down. So, he will start on 220Hz (A3) and then he will jump to 330Hz (E4). 110Hz up and 1.5 times the frequency. So, what sounds like the same change is still 1.5 times the frequency but a smaller step of 110Hz.

This also shows that moving an octave (doubling or halving the frequency) is perceived as pretty much the same note. If the woman was close to 440Hz and the man close to 220Hz, they would be considered as in tune. Others have touched on why: all of the harmonics of the woman's 440Hz would also be harmonics of the man's 220Hz.

This is common in physics. Look at the formula for the gravitational attraction between two bodies. Newton did not invent that formula and impose it on the Solar System. He figured out that it did a very good job of explaining and predicting the Solar System's behaviour. Your formula is similar: it was not imposed on music. Music came first and the formula was developed as a model for it later.

All the other answers are correct, but the root of the answer is simpler: the relationship between frequency and pitch is exponential, not because of perception or convention, but as a matter of simple geometry. Intervals are frequency ratios, not A plus B but A times (or divided by) B. The interval of an octave exists between a tone and another tone with twice the frequency, so that there are two cycles to every one cycle. The nature of intervals is geometric and therefore exponential.

There is a scale called Mel Scale, which is (frequency to degree):

and (degree to frequency):

It's a scale that empirically fits the ears of human, created from psychologic experiments.

The chromatic scale is an approximation of the Mel Scale, though not by design.

Not the answer you're looking for? Browse other questions tagged frequency or ask your own question.

9
How to calculate the difference in cents between a note and an arbitrary frequency?
6
How to calculate the resulting frequency of two tones played together?
1
Formula to adjust a note by cents
0
Is there the exact same frequency-multiple between any-2 successive keys in any keyboard-instrument?
3
Is the dominant tone of a major scale halfway in frequency between the tonic and octave?
27
Why is a 440 Hz frequency considered the "standard" pitch for musical instruments?
0
Are the terms tuning and pitch the same?
10
Is there a relationship between prime numbers and music?
5
Why are the frequency ratios of notes in the Pythagorean scales 9/8 and 256/243?