I've read several times that John Coltrane practiced extensively from the Slonimsky Thesaurus of scales and melodic patterns and that Coltrane's Giant Steps is strongly influenced by or is even a direct quote from those scale exercises.

My question is twofold:

I just ran across this Masters dissertation on Coltrane and Slonimsky! It is as comprehensive an answer as could possibly be hoped. It does address Giant Steps (there are 39 references to it), but in addition, Coltrane's "use" of Slonimsky in many tunes and improvisations. (I was searching for something about One Up, One Down, which I found)

Orthogonal p.s. I also highly recommend Slonimsky's autobiography: Perfect Pitch. I used to hear him interviewed on KCRW in the 80s, back when he was well into his 90s. A total character!

In Slonimsky's book, page 27 (page 39 on your pdf) "Ditone Progression, Equal Division of One Octave into Three Parts" you see that Slonimsky uses the notes C E G# and C again. They all are a major third apart and they divide the octave into three equal parts.

Now let's look at the sheet music of Giant steps: 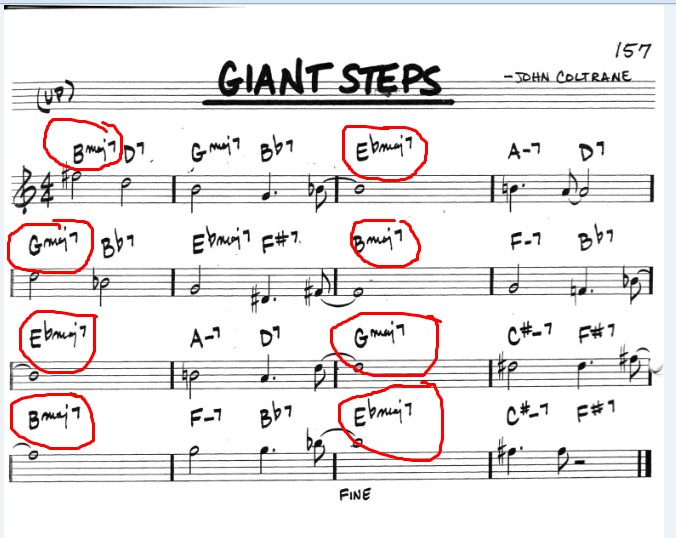 The piece has 3 different tonalities. It starts off in B major, it then goes to Eb major and finally to G major and all over again.

If you notice, all of these tonalities are a major third apart*, like the scale Slonimsky mentions. So basically, Coltrane took what Slonimsky created as a scale and used it as different tonalities.

I've heard this rumor as well, read about it as well, but I'm not sure if Coltrane ever actually claimed this, or if people just deduced it. The rumor does make sense though.

Giants Steps bears a striking resemblance to this "12-tone progression" from the Introduction to Slonimsky's Thesaurus of Scales (pg. vi):

This was mentioned by Quincy Jones in a recent documentary and confirmed in this Tweet from composer Darcy James Argue:

Blogger Peter Spitzer has surmised that Coltrane may have combined Slonimsky's harmony with a theme from Harold Shapero's String Quartet (1941):

19
What did bebop masters practice?
12
Harmonic analysis of the B section of "Have You Met Miss Jones"

26
Playing a Coltrane polychord and the limits of space
14
What are the Coltrane Changes?
5
What is the Slonimsky-Schillinger Symmetric System?
0
Scale Families: heptatonic scales organized by half-steps in their intervallic spelling
0
Is this a helpful way to think about Coltrane Substitution?
1
Solo Scales to Blue Train (John Coltrane)
10
How to break out of playing scales up and down when improvising
1
Can my scale have two whole steps of distance?