In a music theory workbook, there was an example of a German 6th chord, which resolves to chord V. However, there is an interval of parallel 5ths in this (A♭ & E♭ going to G & D). 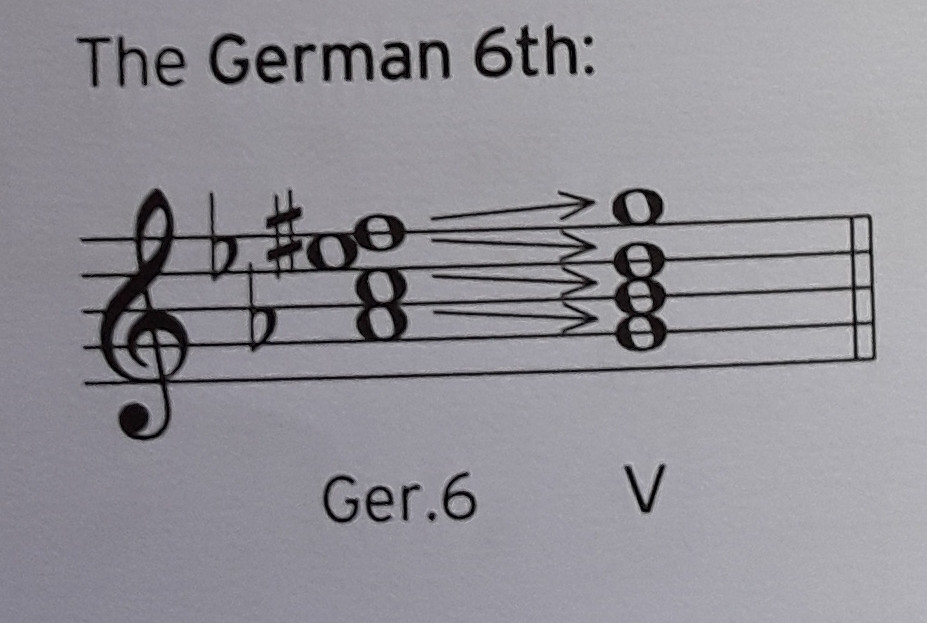 How are these parallel 5ths allowed or ok to do? Is it typical to do so?

They call them as such because Mozart did this quite often. Wikipedia provides some examples from his works and this one from his Symphony No. 39: 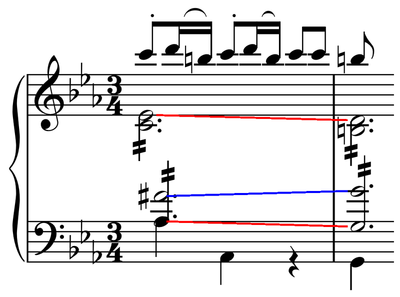 In the Wikipedia link on German 6ths there are some examples on how to avoid these.

The Italian and French augmented-sixth chords don't have scale-degree 3 either, so they have no risk of parallels; you can resolve them freely to a cadential six-four or to a root-position dominant without issue.

Interestingly, Mozart seemed not to care about parallel fifths from a German to a V. He did this so often, in fact, that we often call such resolutions "Mozart fifths."

"Mozart has more than once resolved the augmented German 6th chord with parallel fifths. He has done this so often that one may speak of "Mozart's fifths."

In recent literature is highlighted that such parallels of fifths occur in Mozart, but in his oeuvre are altogether a rarity. Examples are u. a .:

However, Mozart fifths are hardly a rarity in nineteenth-century music. B .:

Frédéric Chopin: Nocturne in C sharp minor, KK IVa No. 16 (1827), m. 1. Robert Schumann: Album for the Youth op. 68 (1848), First Loss, T. 21-22. Already in 1802, Charles-Simon Catel expressly allows this kind of 5th parallels in his influential Traité d'harmonie, unless it takes place between the outside voices. [4] In German-speaking harmonies of the 20th century, it is also explicitly endorsed as the "Mozart fifths".

Not the answer you're looking for? Browse other questions tagged theory chords harmony chord-theory chord-inversions or ask your own question.

1
Inverted 7th chords in open position
16
Why does a minor sixth chord contain a major 6th interval?
1
Is there a way to determine the flatness (or sharpness) of the 4th note of a chord from its name?
12
When a major 6th (or an octave thereof) is in a chord, when is the chord symbol written as a 6th vs. a 13th?
4
Are there any pre-20th century examples of an augmented 6th chord with a leading tone?
3
Parallel chord substitutions
3
Chord symbol and Roman numeral for naming an Augmented 6th chord
7
Writing an augmented sixth chord on the flattened supertonic
0
Do you avoid parallel octaves/5ths when writing parallel supporting Melodies?