Amplitude of a crest and trough in a sound wave?

Lets say we have a sound wave, it has a frequency, wavelength, crest, trough, etc.

My question is, is the crest of a sound wave equaled to high amplitude/ high volume and if so, does that mean the trough is low amplitude/ low volume?

I'm basically trying to figure out if the crest and troughs in a wave represent maximum volume at the crest peak and maximum silence at the troughs peak.

A crest and a trough both cause the eardrum to move away from its normal, undisturbed, resting position. Hence, the crest and the trough both embody a loud sound. When there is no sound, the ear drum is still; it is resting in a central position. When sound waves strike the eardrum, it moves the eardrum inward (crest) and outward (trough). The ear converts the inward motion and the outward motion into electrical impulses, which are sent to the brain.

We can also look at this mathematically. The loudness or volume that we hear depends on the intensity of the wave. Intensity is acquired by squaring the amplitude/maximum displacement. Hence, when we take the square of a negative number, the resulting intensity value becomes positive.

is the crest of a sound wave equaled to high amplitude/ high volume and if so, does that mean the trough is low amplitude/ low volume?

Not exactly. A sound wave is something that is perceived when sound pressure is changing at a rapid frequency - oscillating up and down at 20 cycles per second or more. 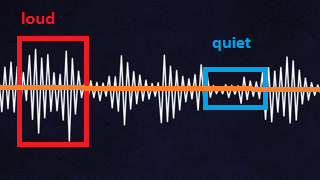 If you look at those two areas of the picture, the peaks and troughs are further from zero in the high volume (loud) area than the low volume (quiet) area. However, even in the high volume area, the oscillation frequently passes through zero. So seeing a low amplitude point on a sound wave doesn't necessarily mean that the sound is quiet, because the perceived volume depends how strongly the wave is oscillating.

The quiet point in a sound wave is actually at the median point between the "crest" and the "valley" in a balanced wave, where the valley is equal in loudness to the crest but 180 degrees out of phase. That's as simple as I can explain it.

Not the answer you're looking for? Browse other questions tagged acoustics psychoacoustics or ask your own question.

13
What kind of ear protection offers the best compromise between protection and sound fidelity?
2
How can I visualise the effects of EQ as a curvature represented on a graph?
2
What contributes to the roughness of a sound?
1
A seriously difficult question about mistakes and intepretation of music
0
Accurate understanding of the physics of sound?
6
Music Physics Question - Automatic Trumpet Embouchure Mouthpiece
5
Can you change some composition I wrote to whatever music you want just by changing the timbre of the instruments?
6
Bass sine wave on an acoustic instrument