I heard a song with "I - bVI - bIII - bVII" and It's one of my favorite progression. So I want to know about that progression.

There isn't a name for this specific progression, but it might make sense to call it a circle of fifths turnaround. Let's assume you're in C; this would make the progression:

Here are some things that make the progression interesting:

Separately, the reason ♭VII to I sounds good is that ♭VII has the 2nd and 4th scale degrees of the I chord, which draw the ear toward the 1 and 3 of the I chord.

It’s likely you mean the I is minor, thus i-, bVI, bIII, bVII. This is a very popular progression (turnaround) in disguise.

The key signature has three sharps which could make the song either in F# minor (as indicated by the first chord in the progression) or A Major.

If we agree that the song is in F#- then the progression is i-, bVI, bIII, bVII.

However, if we look at it from the relative major, which is A Major, then the progression is vi, IV, I, V.

We usually look at progressions from the perspective of the relative Major key, hence vi, IV, I, V is popular and the more common way to view. However, it’s equally valid to understand it from its minor perspective, hence i-, bVI, bIII, bVII. 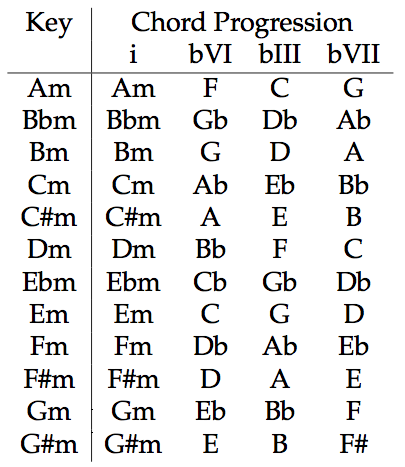