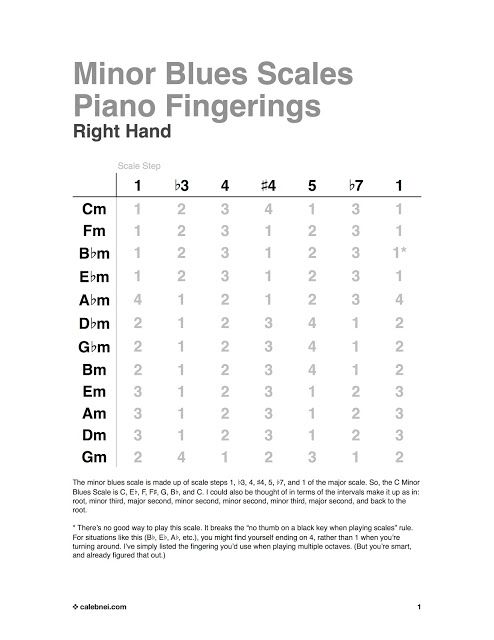 Can somebody explain why Ab minor scale starts with 412? I would start with 414. Then the whole scale would be faster because of less space to shift fingers. Am I wrong?

And, looking at some other fingerings, I don't agree they are the best. Just because it's on the internet doesn't make it credible...

There is not really a right and wrong here.

Blues scales are tricky when played straight up or down through octaves...this gets more complicated when taking into account the starting note..One often assumes the root as the starting note. I find that you can navigate them all using 1234 over and over or 123 over and over, or some combination of those two maybe with a different starting finger.

Not the answer you're looking for? Browse other questions tagged piano scales blues or ask your own question.

5
What fingerings are used for the minor and major blues scales?

46
Why does the scale have seven (or five) notes? Why not six?
14
Why do the notes of Melodic-Minor Scale change when you play it in descending order?
0
What is this scale?
0
Why does minor scale and minor chord differ in degrees?
5
What scales to play over A minor blues?
22
Making Sense of Blues Soloing; differentiating major/minor pentatonics
5
What is going on in this left hand comping by McCoy Tyner (Bb minor blues)?
3
Why is there no "half/minor-third augmented" scale?