I've tried jumping it, leaving the high A on 5 as fast as possible, but keep flubbing it (worsening as I accelerate the tempo); I've tried subbing the 2 for 1 (so it becomes a 1-5-1-4 sequence), but flub that even more frequently. Initially I was trying to make the stretch from the 5 to the 2 but quickly learned that that was unlikely to be an appropriate approach (hand pain).

I have noticed that some performers actually introduce a slight ritardando at the last half of this measure (for what I suspect are similar reasons - see this recording, at time approximately 00:22 - 00:26), but that not being indicated in the score I'm hesitant to apply it myself.

So what is the issue that is causing your problem? Well I don't know but I have two suggestions.

Firstly (and I'm sorry it's obvious but this really is something that you should be doing) - practise more slowly. Get the notes right then up the tempo. Its amazing (to me anyway) how many people just do not see how well this works.

Secondly - start thinking of the notes in a different grouping. I'm guessing that you are thinking of a hand position that accommodates each group of four notes in line with the beats in the bar. So you have a position for the first four (starting with E#) and then a position for the second four (starting with F#) etc.. Well try to think of it differently. First four notes in one hand position, next four in another hand position, the next two in another position and the final 6 in another position. Sounds a bit daft? Try it - you might be surprised. It certainly works for me.

@Jeremy Holland Actually I wanted to post this as a comment to your question, but I need to post an image in order to describe my point, so I post it as an answer:

There is a typo in the image of the music you posted, the bar should be like this: 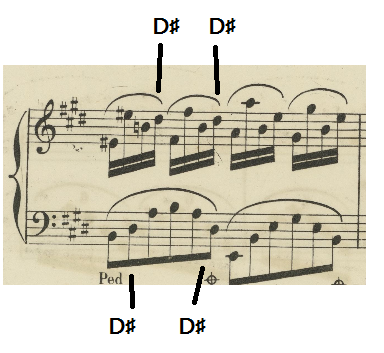 If you can't get 2 on the B reliably because it's too much of a stretch, from the top A, then you have to use 1 on the B.

Almost all the difficulty of this (and other things in Chopin) is psychological, not physical. You just have to find the way to trick your brain into thinking it's easy, and it will then BE easy.

i used to slow it down at that part simply because the fingers couldn't keep up. after some time--many months to be exact, the problem just goes away.