Music theory behind A chord in the key of G

I'm fairly new to music theory and i want to know the rule/principle/theory behind why for example you're in the Key of G playing an A Chord is acceptable. Can someone point me to what i can read to learn something about this?

We can give it the label 'secondary dominant' or 'V of V' and pass on. But that's too simplistic, and reinforces a mind-set of chords being 'allowed'.

Playing ANY chord is 'acceptable'. There's no requirement to stick close to the diatonic scale (and except in the most simplistic music of 300 years ago composers never have). A piece in G major will commonly embrace chords like Ab major, F major, B♭ major, C minor (a very common one, that) and many more. Even a simple 'Blues in G' uses G7, C7 and D7. The notes F♮ and B♭ are strongly featured, and the key is still firmly G major. Like my grandmother used to say: "Pick the bones out of that!"

Here comes my favourite mantra. 'Theory describes, it does not command'. Now, how shall we describe that A chord in the key of G? It MIGHT be used as a 'secondary dominant', leading to a D chord. (We can't discuss elementary harmony without referring to 'Minuet in G'!) See how the music reaches an A > D cadence (then immediately cancels the C♯ to return to G)? 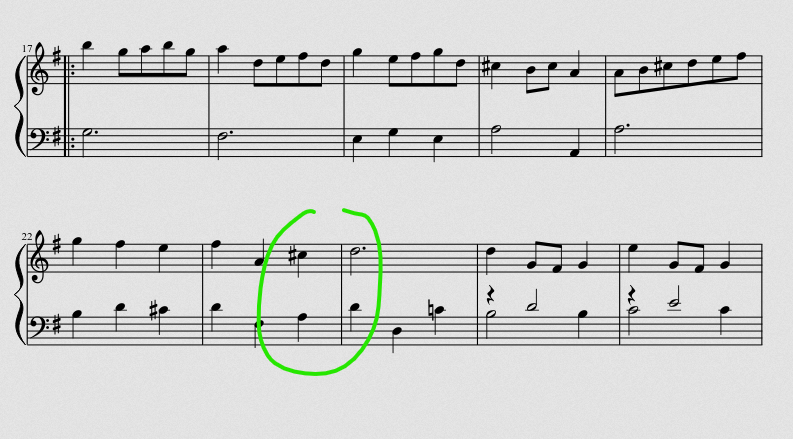 And then it MIGHT do something else. Analysing the A7 as a 'V of V' would be futile in 'Leroy Brown'. This is more an extension of the Blues 'make everything a dominant 7th shape chord' thing I think. (But a blues in G would use C7. Wouldn't it be boring if music just followed a set of rules!)

If you wonder about the out-of-scale notes introduced by these chords, think of it like: harmony rules, scales obey. And chords are a tool to powerfully manipulate harmony. For example the melodic minor scale, when played in an ascending (upwards) line, implies harmonic changes. In Am melodic minor, melody notes E - F# - G# - A, imply a harmony progression that could be explicated with chords like Am - B7 - E7 - Am.

Since D, in key G is used so often, and is frequently the key modulated to from key G, The A chord is quite closely related to G.

Look at the circle of fourths/fifths, and see that it's named only two places away from G. A close neighbour.

The same thing happens with chord B (or B7) in key G. Although it has fewer diatonic notes, it is a secondary dominant, leading to Em - a completely diatonic chord in key G. And it contains the leading note of Em - D♯. In this case, called V/vi.

If the A leads to a D, then it is called a secondary dominant.

Composers sometimes use 'tricks' - like treating a chord as if it was suddenly part of another key - to introduce colour through slight but nevertheless unexpected deviations from the tonic key. With a chord like A major there is only one note not found in the G scale - C#.

For example, with G as the tonic as in G major there are only two other major chords in that key - which are built on Subdominant (C) and Dominant (D).

However if we treat the G major chord as being either the Subdominant of D or the Dominant of C, we find A major and F major generated respectively (technically these are secondary chords eg the dominant of a dominant). Likewise we find a similar thing happening in the Harmonic Minor key, where G major may be taken as the Dominant of C minor; or, in B minor, the other major chord is built on the flattened 6th, the Submediant. In such cases the other major chords generated are A flat and F sharp respectively (technically these are borrowed chords from parallel keys ie minor or major scale having the same tonic).

In all four cases each major chord (F, A, A flat and F sharp) generated from a closely related modulation from G major contains two notes from the Tonic key and a third note introduced by the substituted key change. This type of chord substitution was developed in the Baroque period. A more recent example is 60s pop music where it was used by bands such as the Beatles who frequently swapped related chords around creating a bit of a twist.

A distant modulation may contain only one note of the Tonic scale eg A flat minor has a C in it same as G major scale. An unrelated modulation has all three notes different eg E flat minor (E♭ , G ♭, B ♭ - none of which occur naturally in the G major scale.) Such unrelated modulations are unsettling and startle the listener unless they have been introduced earlier in the composition and one has therefore had a chance to acclimatise to the unrelated pitch shift.

As others have pointed out, it could be many things, and without context, it's anyone's guess. However, if you see a major chord a whole step above the root of the key, here are a few possible explanations:

Secondary Dominant (V/V(or v)): As others have stated, this is often the best explanation of such a chord, especially if it resolves (goes) to the V(or v), D major in this case (D minor if it is from outside the key). Note: secondary dominants can be unresolved; this is more often the best explanation when the chord is the is a dominant 7th and is in a different position with respect to the root.

Deceptive Cadence (♭VII/iii(or III): Basically, you are borrowing ♭VII from the minor scale with respect to the iii(or III); iii happens more often because III is outside of the key. Also, the previous note can be applied here as well.

Borrowed Chord (Dorian II): A major is in D Dorian. It could be borrowed from there.

A Major Second Chord (II): The songwriter could have just wanted to have a II chord, who knows.

This is by no means an exhaustive list, but I hope that this shows that there are a number of different functions that an A major chord can have in the key of G major.

Put very simply, from a jazz/pop perspective, you'll see many "ii-V-I" progressions. You'll also hear that term often (ii-V-I). You can substitute II (the A chord in your example) for the ii.

A broader concept than "secondary dominant," which is correctly mentioned in many of the answers, is chromatic alteration. There are several contexts in which it is common. One of the more prominent contexts is when a melody or part moves from one pitch to the neighboring pitch (in either direction) and back. If the diatonic neighbor is a whole step away, the pitch may be "altered" so as to be only a half step away. For upper neighbors, this practice was well established in certain contexts as early as medieval times. For lower neighbors, it also appeared in the medieval counterpoint in certain cadential figures, but it became increasingly common in other contexts over the centuries.

Through this process, a piece in any key can "legally" contain any of the 12 chromatic pitches. Or, as noted in another answer, theory is probably better thought of as a framework to describe how music is written than as a set of rules describing what a composer is allowed to do. In studying composition, however, it does very much take on the latter role.