How does one play figured bass when the bass line contains ties? 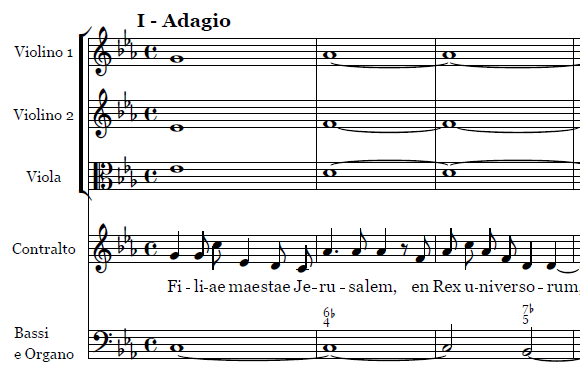 Do I understand correctly that in measure 1, since there are no numbers to indicate an inversion, one has to play a chord consisting of C, Es and G?

Your first guesses are correct: you hold the C in the bass between measure 1 and 2, and from measure 2 to measure 3, the C in the bass is held over, and the chord remains the same, C, F, Ab. Btw- "Es" in English is "Eb".

The tie is irrelevant to understanding the notation. If you have a figure part way through the duration of a long note, you play the new chord but you don't repeat the bass note.

That is very a common notation - for example 64 53 figures over the dominant at a cadence.

The only reason for the tie is that modern notation conventions don't have any other notation for a note that extends beyond a bar line. Up to the end of the 18th century, there was such a convention in some situations, so the OP's question wouldn't exist at all.

Not the answer you're looking for? Browse other questions tagged chords notation baroque-period figured-bass ties or ask your own question.

13
Do some measures get no numbers, in an opera score?
7
Is it wrong to alter bar numbers after repeat endings so they reflect the performance progression rather than the last repeated measure +1?
5
Can we use double accidentals in figured bass?
3
Understanding ties
4
5/7b in figured bass
5
How to realize a figured bass
2
Can you solve these figured bass queries?
18
How does one maintain voice integrity when longer and shorter notes of the same pitch occur in two voices
4
The proper way to mark sustain pedal for MuseScore playback and live performer?
4
Figured bass question: When to use #6 in minor key?