Why is the G major to Bb major resolution so strong?

So, about a year ago, I composed a nocturne in Bb. And I used this harmonic progression in the B sections of it:

Now, out of the 7 chords in this progression(6 if you count both appearances of Bb as a single chord and not 2), only 2 are non-diatonic to Bb. Those being C and G.

The use of C in place of Cm is understandable. The piece sounded peaceful, so there was no need to interrupt that peacefulness by using Cm. And I used the G as a dominant function chord so it made sense that it was major. Now typically, movement by thirds is weak. But also typical is for that movement by thirds to involve 1 major chord and 1 minor chord, for example, this:

That is not what I have going on here with this G to Bb motion. So let's look closer at the chords. Now I use them in root position but here, I will show the smoothest voice leading for most of the chords. Here they are with a Roman numeral analysis and how I would describe this chord progression. Tonic chords circled in green, subdominant area circled in blue, deceptive cadence circled in red, and the substitute dominant being pointed to.

So as you can see, the G major that I am using as a dominant function chord would in Roman numeral analysis be considered the VI chord of Bb major if you were to view the whole thing as being in Bb as I just did. The C major I considered to be the II chord, replacing the ii chord which would be C minor. It didn't feel to me as though it was a V/V because it was replacing the ii chord. So it still had that subdominant feel to it. Plus, C is the submediant note of Eb and chords that are a third apart tend to have the same functions. So the C chord is subdominant.

I think there are 2 mechanisms behind why the VI is working as a substitute dominant here. First off, it comes right before the tonic which just by itself gives the feel of a resolution. Second, I think half steps are the primary source of the strong resolution. The B in the G major chord wants to resolve down a half step to Bb. When you combine it with the D which doesn't want to move, and the G which wants to move down to F but can easily go up a third in the bass without compromising the resolution, you have a pretty good substitute dominant.

But, is this the reason why my G major to Bb major resolution works as well as it does?

EDIT: Since one of you asked for it, here is the nocturne that I composed. First instance of the chord progression I mention in this question is at 0:30 in the video.

You will also hear me use 2:3 polyrhythms both when I go to and from Bb minor to add those moments of intensity. Those sections are based around the circle of fifths.

I think you need a better reason to call the penultimate chord a dominant than 'It comes before the tonic'!

You're trying very hard to explain this sequence in functional terms. Why? I think it just meanders around. Most of the chords have a note in common with the one before. It gets back to where it started, which I suspect is the main reason the final B♭ chord sounds 'right'. That's ok.

What does the melody do? Very often the melody is the unifying element.

As for the voice leading to B♭, it's very smooth. Not counting the bass, we have the D holding constant between the two chords, the B♮ moving by half step to B♭, and the F moving by whole step to G. This is a net motion of three half steps, which is exactly the same as the net motion of V moving to I and of IV moving to I.

To me, this "works well" because of the smooth voice leading.

I sense that seeing the actual music would help.

Just listening to the reduction as is - all in root position, no rhythm - it sounds like bar 4 could be a half cadence, after that could be a continuation phrase that plays with a chromatic mediant change, but G to Bb at the end doesn't sound like dominant to tonic, it doesn't seem like a phrase ending or resolution.

To me it's hard to not hear a set up for a symmetrical phrase, perhaps something like: I... V in Bb then if you add a D major chord at the end it would become i V in Gm the relative minor.

After listening to the audio...

Mm. 10-11 you labeled a cadence, and I sort of understood you meant mm. 12-13 as a cadence too. I have trouble feeling a cadence in either place. In mm. 10-11 every aspect of the music keeps going. At mm. 12-13 it ends with a rest, but a rest and a proper phrase ending aren't the same thing, there isn't really a harmonic ending.

My honest feelings after listening to it: the G major does sound like a dominant, but not for Bb. It sounds like the tune says, "wait! it's not over yet, now the plot takes a turn and there's more something coming up". When the Bb arrives, it feels like a relief, because the extra round of stuff was canceled at the last minute and the song decided it wasn't necessary after all.

To consider something a dominant, the dominant-tonic motion doesn't have to actually happen, IMO.

Technically, to call a chord "substitute dominant" it should contain the tritone of the actual dominant. In your context, the dominant chord is F7, and the tritone is formed by the A and Eb notes. Therefore, the substitute dominant chord with the root on the VIth degree will be G13b, containing both the 9th tension (a) and the 13b (eb). So this is not the right path to find the explanation for this case.

In your case, you hear an smooth transition from G to Bb just because they are chromatic-mediant related. 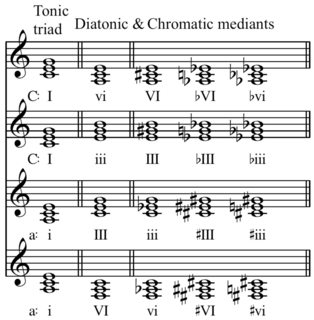 The smoothness in the transitions is actually the main feature of the chromatic mediant composition technique, and that is the reason why they are so widely used as backgrounds and movies soundtracks. In summary, two chords are chromatic-mediant related if they are at a distance of a third and they share a common note. In your case G and Bb are in a distance of a third and both share the d note as common. You can read more about this topic here.

Not the answer you're looking for? Browse other questions tagged chord-progressions functional-harmony or ask your own question.

5
How do I rationalize this interesting chord in Mozart K. 331?
3
Modulating from A-flat major to C major (Beethoven)
0
Interpretation of this Chord Progression
1
Harmonic Minor Progression Understanding
3
Using Roman Numeral Notation with Notes in the Bass (not figured bass)
4
How is Db major functioning here? Subdominant Prolongation? Some kind of Dominant?
1
Can we understand subdominant/dominant chord functions in terms of them being tonics of other keys?
1
How to approach Iminor - VIImajor progression in a functional harmony way
3
VImaj7-V7-i What is the role of the VIth?
1
C7 - Ab maj resolution