How can I develop highly accurate intonation/tuning without perfect pitch? [duplicate]

I've been reading a bunch of things violinists write and a good portion of them seem to contradict themselves. At this point I'm starting to get really frustrated, so I could really, really use some clarity right about now.

Some articles (and comments on a previous question of mine) are insistent that relying on tuners for practising intonation is a bad thing and that I should learn to do it by ear. The seems to make no sense since the general consensus is that the only way to develop perfect pitch is to either have someone train/condition you as a toddler or develop synesthesia as a consequence of brain damage, neither of which are viable options for me.

Pitch memorization isn't possible because it's just another way of saying perfect pitch, and from what I've heard, it's pretty unreliable even after a few minutes of not hearing a sound.

I can't use relative pitch because supposedly, it leads to incorrect intonation because a lot of music uses flattened perfect fifths instead of pure ones.

So far as I can tell, it should be impossible for a person without perfect pitch to play the violin with good intonation. I know that even in world of top-grade professional violinists, there are less with perfect pitch than those without, so this can't be right; I can't seem to figure out how to go about this.

Well, you can use relative pitch. While it's true that 12TET is slightly flat (from A440 we use E659.25 instead of E660), it's a difference of just a couple of cents. That's going to sound "right" to just about everyone. If you're playing a solo piece, even a person with perfect pitch would need to have pretty extreme pitch sensitivity to hear that you're off by one vibration every 1-1/3 seconds without a reference pitch!

The problem isn't really nailing the exact frequency, but hitting a frequency that's in agreement with what's going on around you.

Since you mentioned tuning in the question, I'll work with that - the same principles apply to intonation in performance, but since the notes are generally too short in duration, if you can learn to hear when you're "in tune" with a specific tone, the intonation issues will sort themselves out in time.

Vibrating objects (like violin strings) cause changes in air pressure, which our ears sense, and then our brains sort out into sound. We can graph out the actual air pressure, and for a single pure tone it looks like a sine wave: 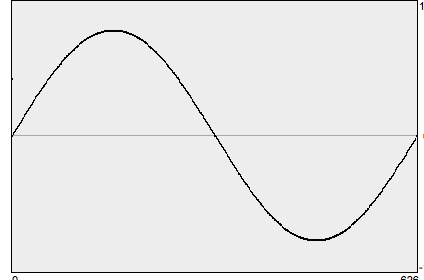 But the air pressure on your eardrum at any given moment in time can only be one value. So if you're hearing two sounds at once, the waves combine. If both waves are rising, they cause constructive interference with each other, and the wave amplitude (how high the 'peaks' are) increases. If one wave is rising while the other is falling, the result is destructive interference, and the amplitude decreases.

So if you have two sound sources that aren't quite in agreement, the result looks something like this:

At points A and C the waves of the two sources are in agreement; at point B the destructive interference makes the total of the two waves cancel out.

We hear these changes in the composite wave as changes in volume. If you have a reference playing A440, and you're playing A436 at the same time, you'll hear the combined result fluctuate in volume four times every second. (Mathematically, the difference in the absolute value of the difference between the two waves is the frequency of the "beats").

When you start hearing those beats, move your finger a bit. If you're getting closer to an exact frequency match, the beats will slow down - at A438 you'll only hear two per second. If you move the wrong way, the frequency of the beats will increase.

Taking this back to the difference between "pure" fifths and 12TET fifths, if you play E660 against E659.25, you will hear one beat every 1-1/3 seconds, the time it takes for the two waves to reach a point of complete opposition. Unless the notes are really, really long, virtually nobody is going to hear that.

Intonation on violin is a big subject, an answer here can only give a taste of it, but this should give you something to chew on. Also the other answers give food for thought.

Professional violinists are nurturing their intonation through their entire career. At the moment you stop nurturing your intonation the quality of the playing will suffer.

Some articles (and comments on a previous question of mine) are insistent that relying on tuners for practising intonation is a bad thing and that I should learn to do it by ear. The seems to make no sense since the general consensus is that the only way to develop perfect pitch is to either have someone train/condition you as a toddler or develop synesthesia as a consequence of brain damage, neither of which are viable options for me.

An example: If you play a C♯ as a leading tone leading to D you might play a rather sharp C♯, but if you play a C♯ as the third in a sustained A major chord you might play the C♯ a tad flat in order to get a real nice sounding A major chord. You use your ear to make that chord sound right. This is the kind of professional intonation level typical in classical chamber music like in a string quartet.

I can't use relative pitch because supposedly, it leads to incorrect intonation because a lot of music uses flattened perfect fifths instead of pure ones.

Now it gets tricky. On a piano which is tuned with equal temperament, 12TET intonation, the perfect fifths are flattened a tad. Strictly speaking that means that the perfect fifths are actually out of tune. But what is "in tune" and what is "out of tune" really? It depends on what you agree or decide is in tune. If you decide that 12TET is in tune well, then that is in tune because of your decision or agreement.

You need to crawl before you can walk, so of course you don't start with the most advanced ways of intonation. What you should do when you start practicing intonation is to practice listening to the notes that resonates with the open strings. When you play any G, D, A or E on the violin they should resonate with the open strings. Like an A one octave higher than the A-string has a good resonance if it is exactly one octave higher than the A-string. If you play it a tad flat or sharp there won't be the same resonance. Persue that. Another thing is playing simple tunes that you know, because if you know them you can hopefully easily hear whether you hit the notes or not.

Use a reference first:

I personally recommend playing to a playback with one or more chords. You can program it in MIDI or make a audio recording with your mobile of a tuned Piano.

Play long chord notes first. Later add scale tones. Adjust the micro tuning during a long bow then. Notice when your ears tell you intonating too high or too low overemphasizing wrong playing intentionally. Learn to decrease this tolerance. Your ears will tell you after time.

It also helps to sing sustained notes to given chords. Perfect pitch hearing is not the holy grail at all in music. The thing with tuners is: They dont tell you if its a 3rd in a Tonic Chord or a 7th in a dominant chord which are micro tuned a bit differently. Of course they help building up an overall feel for intervals, sure.

Use a strobe tuner, but use it correctly, for delayed feedback.

Set up the strobe tuner with proper intonation for the key and style in which you are playing, or learn how the strobe moves for the desired intonation of certain notes against the default equal temperament setting.

Then don't look at the strobe tuner as you initiate notes. Wait till after you play what you think is proper note in the proper intonation and see how close you got. But don't correct (slide retune or replay) in real-time! That can lead to motor dependancy on the tuner.

Instead play the note sequences later, from the beginning, and just monitor how close you get by ear on the tuner, practice by practice, day by day.

Not the answer you're looking for? Browse other questions tagged tuning violin intonation or ask your own question.

88
What are the most effective ear training methods?
8
What is the difference between perfect pitch, pitch memorization and relative pitch?
9
How can I improve my violin intonation for enharmonic notes?

11
How can I improve my note accuracy and intonation?
2
How can I tune my timpani to different pitches just using a tuning fork or pitch pipe
5
Can we tell by ear if a piece is in sharp or in flat without relative or perfect pitch?
6
How can i improve my intonation on violin?
2
How to develop a proper trumpet embochure: Tuning and range
6
How can I determine the diameter of my piano's tuning pins?
3
Piano Tuning: How accurate is ±0.5 cents?
9
How can I improve my violin intonation for enharmonic notes?
4
If the resolution of human hearing is approximately five cents, how can musicians play works with intonation changes of less than five cents?
2
Tried Eb alternate tuning but guitar intonation is off and I'm unsure how to fix it