How to Barre Chords Properly?

I've played guitar for about 3 years and usually simplified barre chords to 4 strings because I had such a hard time with them, and now it's become a habit.

I barred the 7th fret today on my guitar and I still cant play all notes properly. I feel like it's the skinniness of my fingers.

I'm thinking it may also be the way I'm holding the fret-board, or how I'm doing barring?

Barre chords are the bete noire of guitar playing! It usually takes a fair bit of effort to get all six strings sounding out cleanly, so it's no surprise you're struggling.

Several factors are important, not least having your guitar in a state where barre chords can actually be played comfortably. This involves having an action that's not too high, and strings (initially at least) not too tight due to a heavy guage. If those are not right, it can be almost impossible to barre chords well.

The barre finger - most often the index - does not need to be pressing all of the six strings at the same time. Think about it, there's often three strings (5, 4 and 3) that are pressed down with other fingers when playing an E shape. So, taking that as our start point, the index finger only needs to press 6, 2 and 1.

Use the side rather than the pad of that finger, and make sure that none of those 3 strings is under the joint part of said finger. Easy enough to find a good position, higher or lower on the fretboard, with no other fingers on. Start around fret 6 or 7, as it's easier there than lower or higher along the neck.

Use your elbow as a lever, and the index finger as the fulcrum point to apply pressure, rather than your thumb behind the neck. It's actually quite possible to play a good barre chord with no thumb on the back, so don't rely on that too much.

Experiment with neck angle, both from a bird's eye view and how high or low the head of the guitar is,, as well as how high or low your guitar is slung. All of which will contribute to the ease of barre playing.

Barre chords can be difficult. When I was learning to play guitar, I got essentially the same advice Tim gave, and it did allow me to play them. But as a professional guitarist for the past 43 years, I can also tell you it's a limiting technique - using the side of your finger will change the angle of your wrist, and moving your elbow to use it as a lever means you'll be changing arm position as well. You'll end up doing more work than you need to do.

There are a couple of keys to playing barre chords correctly:

First, have the guitar at a proper angle. That means your fingers should naturally fall parallel to the frets, and the face of the guitar should be almost parallel to your body - if you're leaning the guitar, you're making it harder to get the right angles.

Second, your barring finger should be straight (i.e. it must follow the curvature of the fretboard across ALL the strings) - any deviation from that means it will be virtually impossible to get even pressure across all the strings. This photo shows my barre in proper position across five strings: 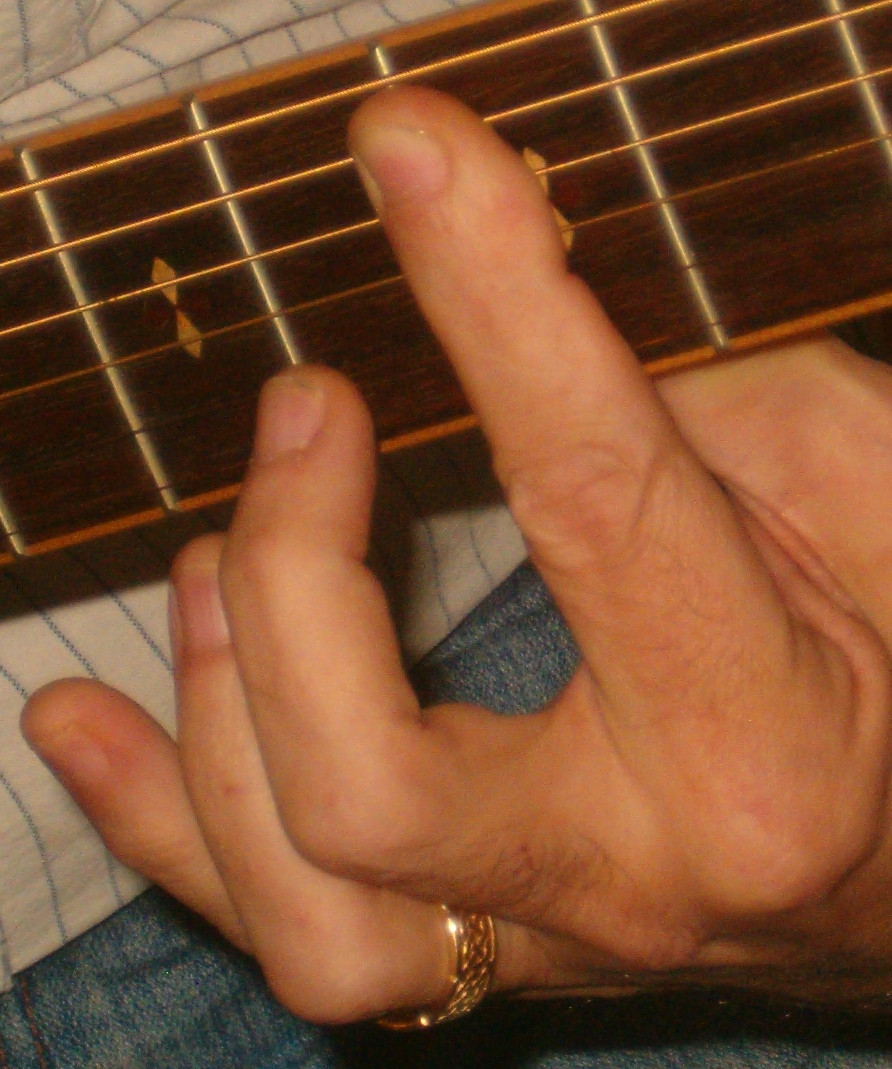 Many guitarists make this mistake: 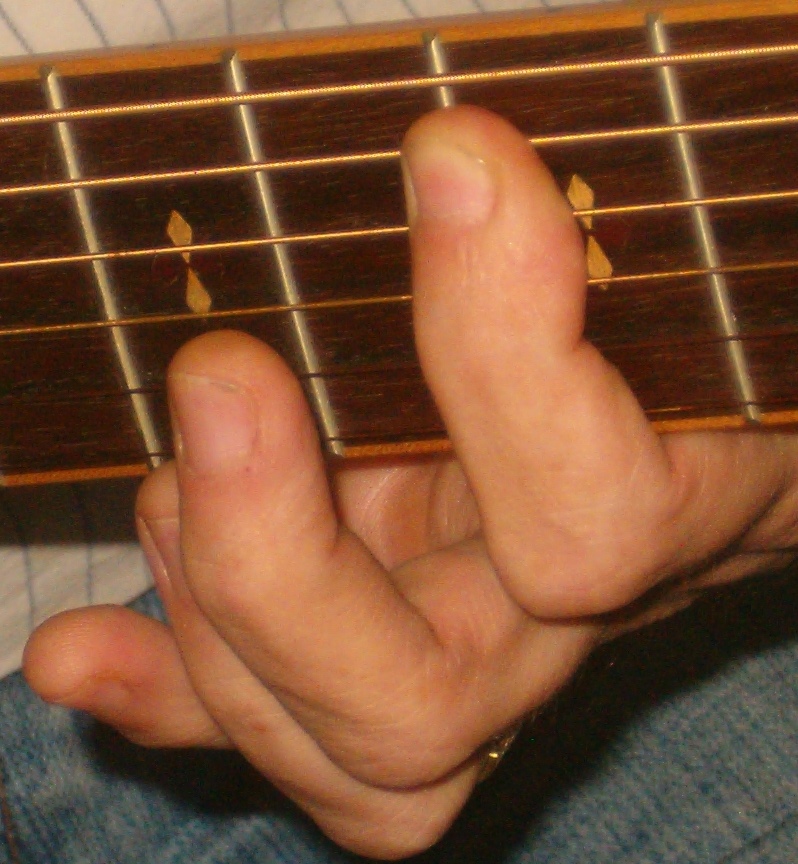 Flexing that first finger joint means you won't be able to get enough pressure on the second string - unless you use the side of the finger and bring the elbow in. But doing that will slow down transitions to other chord shapes or single note lines.

It shouldn't take a ton of pressure, and you shouldn't feel like you're straining. But it does take some experimentation to get exactly the right position, and then some practice so you can fall into that position without a struggle. But it's worth it in the end, because you really can't play fluidly if you're constantly changing the way your body interfaces with the instrument.

0
Beginner difficulty in barre on higher frets on guitar

7
Why is the guitar traditionally held by a strap, and not in the lap?
1
Tips for beginner guitar technique
2
Where should my thumb be gripping when playing A shape barre-chords?
6
How to practice chord changes into B major?
0
Beginner difficulty in barre on higher frets on guitar
4
Advice for beginning guitarist for bad fingers
2
Guitar same fret different string
11
Should I avoid using my index finger on non-barre chords?
0
How to find to the right strings of a barre chord by feel?
13
Is there a reason not to play A/C# as x42225?