How to read this guitar chord cheat sheet?

Coming from a piano background, I have decided to give a try to the guitar and I have started learning some chords. Looking for a cheat sheet on Google, I have found this: http://www.princessdesign.net/wp/wp-content/files/cheat-sheet/guitar-cheat-sheet-1-1.pdf 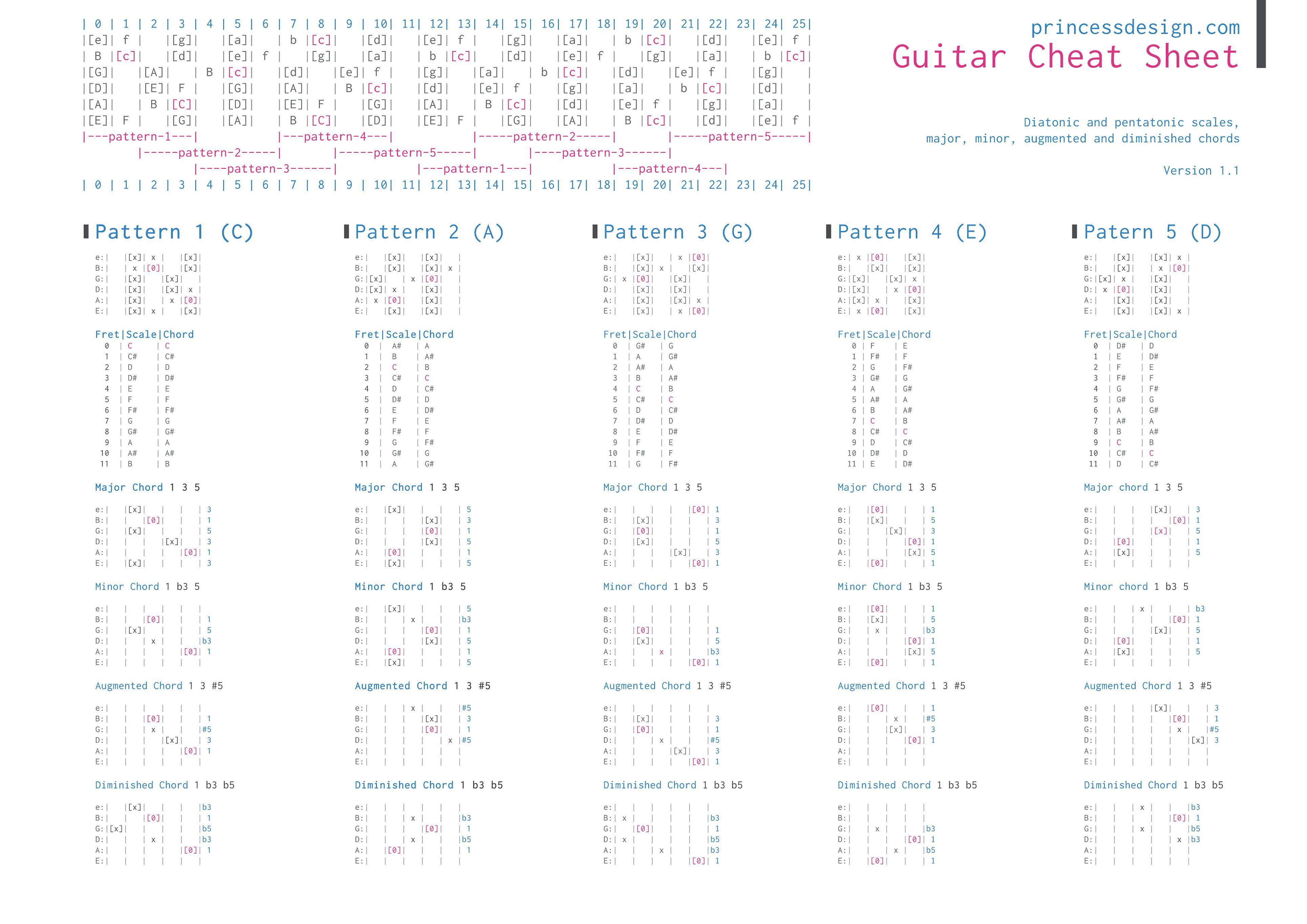 I can't figure out how to read this. The top part is obviously the fretboard, but what do brackets mean around the names of the notes and why are the Cs coloured? And how should I read these "patterns"? What do the x, [x], [0] signs mean? I've tried to compare them with usual chord tabs but I couldn't find any similarities.

It's probably obvious, but firstly, it is a chart of the C major scale.

The top part is the guitar neck. Tone letter are given on the neck.

The next "fret|scale|chord" lists aren't clear to me. Personally, that part feels like information overload. I can't immediately tell what it is and so it isn't helping.

Below that are the four basic triad types. The are arranged in columns under the CAGED patterns to show the triad's relation to each of the CAGED patterns. For some reason in this section the chord roots are designated by [0] instead of C as on the guitar neck diagram. I suppose the point of this is demonstrate the chord shapes can be moved to roots other than C. Also notice that b and # are used to modify the chords from a major triad and those modified tones (like b3 in the minor chords) are not listed on the guitar neck diagram. This part is inconsistent in that some patterns are notated to go over all the strings, but others aren't. I see no reason for that inconsistency, it should cover all strings for all chords IMO.

That's what all the stuff is. But, how to use it?

Drawbacks of this particular chart:

I think it's an OK chart. But look for some others: open position stuff, 3 notes per string, functional chords, etc.

The top row is scales:

The second row gives you the transpositions: if I play the pattern at fret x, y is the tonic. Because the chart you found is based on the "CAGED" system, the root of the chord in a give finger position may not match the position - you'll shift up one fret to play some of the chords relative to the scale

I don't care for the chart... but then I don't care for CAGED in general. It's a major simplification of what the guitar can do, and if you start there (as opposed to learning the note names on the fretboard) you end up overlooking some really useful patterns.

7
How to read guitar tabs more effectively and efficiently?
5
How to read guitar pro chord strumming tabs
10
Learning to play what you're thinking on the guitar
1
Will learning guitar tabs help me improve at learning other tabs/playing melodies?
5
How do I read guitar tabs written in this format?
2
Don't understand this guitar tablature notation
3
How do I know which position to use when I'm playing by ear
0
If piano tablature is easier to read than traditional sheet music
11
How am I supposed to play this chord?