In 1815, a Viennese builder of mechanical instruments named Johann Nepomuk Maelzel patented a device he called a metronome (...)

(...) in 1873 Johannes Brahms, doing his level best to be absolutely crystal clear as to the moderately fast tempo of the third movement of his String Quartet, op. 51, no. 1, indicated that the movement should be played allegretto molto moderato e comodo, which means, literally, "very kind of, sort of fast, but moderately and leisurely." Does that make sense to any of you?

These quotes can be seen in the red line in the scan beneath. Why didn't Brahms mark with metronome markings?

Beethoven got himself a metronome and proceeded to write metronome marks into many of his works, including this third symphony.

The green line says that Beethoven did. 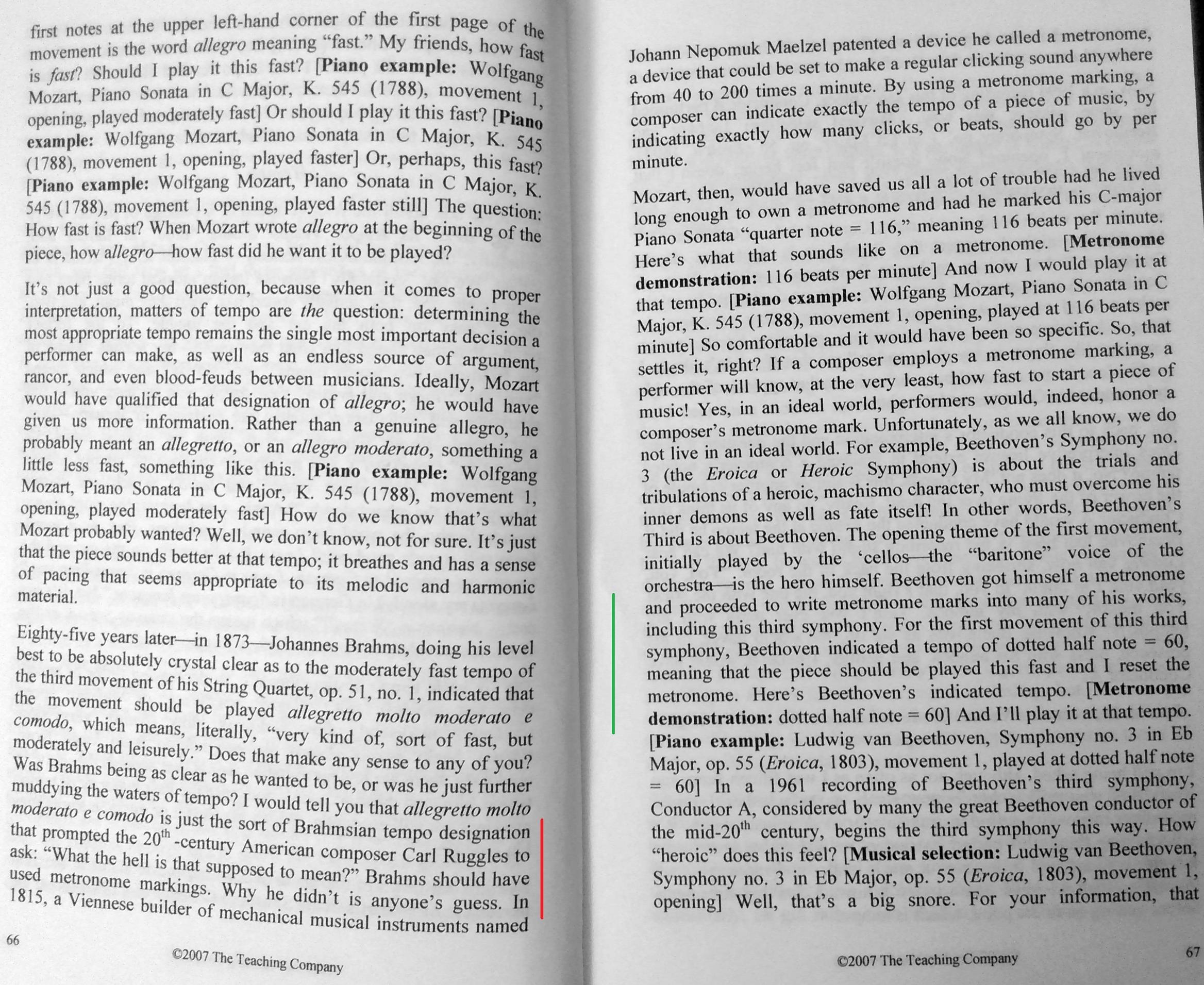 Metronone markings can be very specific. For example "Play this at 100 crotchets (quarter notes) a minute". Does that mean that if you play it at 90 or play it at 110 you are getting it wrong? Some people might think so.

So often you can relax it a bit and say "Play this at something between 90 and 110 crotchets a minute". Now you have suggested that there is flexibility and some discretion allowed on the part of the performer. Something - the characteristics of the specific instrument or the specific concert hall perhaps - will point him/her towards a tempo that will work on that specific occasion.

So if you can be flexible with the tempo, suggesting rather than ordering, perhaps you could express it in words rather than with a formula. This may convey a bit more to the performer about how the piece is supposed to sound. Still does the job, just does it in a different way. And very often this is done in Italian.

Tempos and proportions in Brahms: period evidence (1997, B. D. Sherman)

Sherman mentions Brahms' Third Piano Trio, Op.101; however, I do not see any in the Henle urtext edition. Where I do see them in that edition is at the start of each movement of his original (1854) version of his First Piano Trio, Op. 8. He removed the metronome markings in the final (1891) version and changed some of the tempo indications.

As to Brahms' opinion of the metronome, Sherman offers: 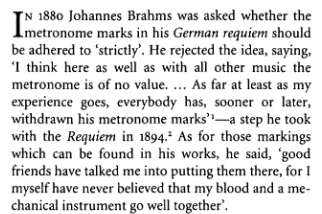 allegretto molto moderato e comodo makes very good sense to a musician familiar with classical scores. It's a very moderate, comfortable allegretto, and therefore slower than what you would play seeing a plain allegretto. It's not a series of different tempo indications -- rather molto moderato and comodo both modify allegretto, which is the basic tempo to which you apply the descriptors.

Beethoven did have a small nationalistic chip on his shoulder regarding Italian as the "one and only language" for expression markings, and began doubling his Italian markings with his own German equivalents.

The tempo marking for the first movement of the Hammerklavier sonata is quite famous. Beethoven writes that it should be played at 138 half notes per minute. Almost no one plays it that fast.

Why? Beethoven wrote for a piano with a much lighter, shallower, faster action, a much sharper attack, and a much faster decay. In addition, his piano was softer, and was played in much smaller, less echo-y halls.

Playing the first movement of the Hammerklavier on a modern piano in a modern concert hall at 138 half notes a minute would injure most pianists and produce a barely comprehensible wall of sound with most of the articulation and phrasing of the piece completely lost.

The "right" tempo to play a particular piece in performance depends on the instrument(s) it is played on, the acoustic properties of the concert hall. It affects and is affected by all the other details of the interpretation such as dynamics and articulation.

Hence, specifying a specific tempo in beats per minute isn't really helpful. It's more helpful to specify the general character of the piece and let a skilled performer find the correct specific speed for the given acoustics that also supports the other facets of the interpretation.

(Incidentally, although we don't have recordings to attest to this, it's likely that pianists of Brahms's generation, possibly including Brahms himself, played the Hammerklavier significantly slower than 138 half notes per minute, so Brahms may very well have personally thought about this example.)

Briefly: because he was wearing his artist's hat, not his engineer's hat. A florid phrase communicated his intent more precisely -- in any performance situation, to any performer who knew that jargon -- than a single number.

I just by chance happened upon a footnote: "Brahms, indeed, disliked the metronome (although he did give indications for the Second Piano Concerto), saying that a metronome mark was only valid for about a week." Footnote 1, Charles Rosen: "Playing Music: The Lost Freedom", The New York Review, November 3, 2005, page 47. No citation is given for the source of Brahms' remark.

If one plays (or even listens to) music at different venues, it becomes clear that different venues require different tempi. Sometimes it's a bit drastic; (what used to be will again be) Notre Dame vs a small, wooden floored jazz club. It has a lot to do with how tones reverberate. Different frequencies reverberate differently from wood floors, walls, people, rugs, sofas, pine trees, etc. Mostly this needs minor adjustment.

In Brahms' case, it seems that he thought that a general indication would be sufficient. (Performers would vary from any specified metronome marking anyway.) Personally I prefer the general indications rather than specific beats per minute (or fractions thereof) unless programming a mechanical or electronic mechanism. I also use Italian as I can expect musicians to understand (most of) the terms whereas a non-English speaking musician may not understand English.

4
Metronome markings vs. tempo markings (BPM vs. words)
5
What Language Is Prevalent for Tempo/Mood Markings in Contemporary Music?
2
Should tempo markings go above or below 1st/2nd time bar brackets?
1
Help With Tempo
9
Why is Beethoven's tempo so off?
1
Are there pieces that have extreme tempo markings?
2
Image of old metronome with faster tempo markings
3
Question about tempo markings on timpani part
1
Any metronome that can hear you through the microphone and tell you if you are going on tempo?
5
What is the meaning of "M. M." in this tempo mark?